All foreigners must bring negative Covid test to enter Korea

All foreigners must bring negative Covid test to enter Korea 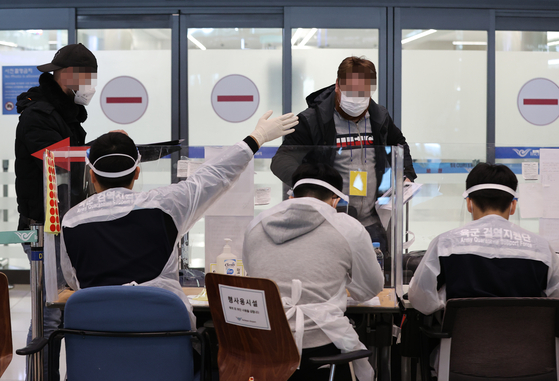 Visitors from Europe at Incheon International Airport are guided by quarantine officials on Thursday. Starting Friday, all foreigners who enter the country must submit a form proving they have tested negative for the coronavirus through a PCR exam. [YONHAP]


Starting Friday, all foreigners who enter Korea by air must submit a medical form verifying they have tested negative for Covid-19 from their country of departure.

According to the Central Disaster Management Headquarters, visitors will have to submit forms showing negative test results from a PCR test. Only forms that have been obtained 72 hours before their departures to Korea will be accepted.

Foreigners who arrive in Korea by sea will be required to submit the same documentation starting Jan. 15.

The heightened requirements are aimed at pre-empting an influx of new coronavirus variants circulating in Britain and South Africa.

The new strains are believed to be up to 70 percent more infectious than previous strains, and have so far produced patients in around 30 countries outside of their origins. Korea has reported 12 infections from the new strains as of Jan. 5, 11 of which were the British variant and one the South African.

Korean authorities further announced Wednesday an extension of bans on all flights from Britain by two more weeks, from Thursday to Jan. 21.

On Thursday, Korea reported 870 new Covid-19 cases found the day before, marking the third consecutive day numbers have dipped below 1,000. The weekly average for new cases per day stood at 863.7. New fatalities numbered 19, putting the total death toll at 1,046.

Encouraged by what appears to be a slowing of the virus’s third wave in Korea, health officials on Thursday announced they will ease social distancing measures to allow businesses like indoor gyms, hagwon (cram schools) and noraebang (singing rooms) to reopen starting Jan. 17.

As for gyms, officials said they will be allowed to reopen starting Friday, but only for nine or fewer children and students at a given time. The measure is in line with the same exemption given to hagwon and certified physical education centers such as taekwondo gyms.

Adult members will still not be allowed to use gyms. 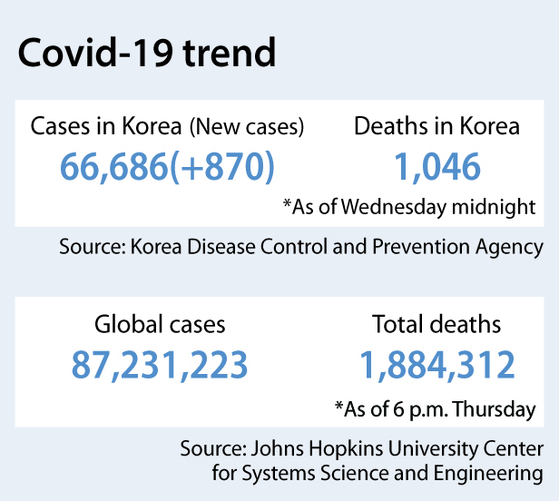 Sohn Young-rae, the spokesman for the Central Disaster Management Headquarters, said the government was preparing a “comprehensive improvement plan” that addressed business owners’ requests for exemptions that would allow them to maintain their livelihoods a month into Level 2.5 social distancing measures.

Under these measures, many types of businesses that involve close physical contact have been forced to either shut entirely or restrict operating hours, leading to financial pain for the owners.

The plights of these businesses, estimated to number around 150,000 in the greater capital area, gained fresh attention Sunday when news of a Daegu gym proprietor committing suicide spread online.

Owners of noraebang and gyms have been staging demonstrations to protest the continued shutdowns, with some saying they would no longer abide by government orders after Level 2.5 rules run out on Jan. 18.

Sohn said the authorities would reassess contagion risks for such businesses in the greater capital area, and will allow them to reopen after Jan. 17 as long as health guidelines are maintained.

While new infections in Korea appear to be steadying as a whole, major clusters continue to produce cases.

The Seoul Dongbu Detention Center, the epicenter of a major outbreak owing to poor sanitary conditions and possible negligence by authorities, produced 67 new cases Wednesday, putting its total at 1,142. Most of the patients are inmates, though some workers have also been infected.

According to Seoul officials, of the 298 new infections discovered in the capital Wednesday, 76 were found linked to mass clusters, including the Dongbu Detention Center’s 67 cases. Other major hot spots surfacing in the capital include a residence for the disabled in Songpa District, southern Seoul, and cases linked to a funeral home in Yeongdeungpo District, western Seoul, producing a total of 18 infections.