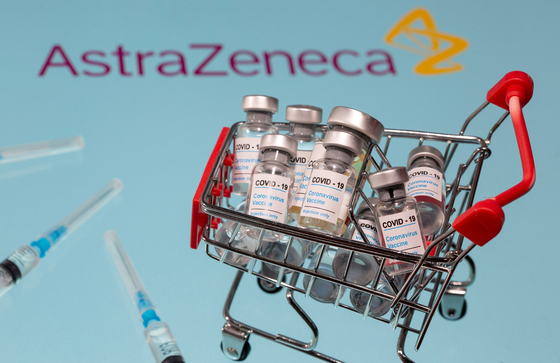 
Korea Disease Control and Prevention Agency (KDCA) Commissioner Jung Eun-kyeong said Friday that about 60 to 70 percent of Korea’s population should be vaccinated against Covid-19 by November this year.

“It is our goal to have herd immunity by November this year,” Jung said in response to questions from lawmakers at the National Assembly on Friday. “In other words, we’re hoping to have 60 to 70 percent of Korea’s population vaccinated against Covid-19.”

Among vaccines from multinational firms that closed supply contracts with the Korean government, AstraZeneca’s vaccine is most likely to reach the country first. The deal between the parties stipulates the vaccine supply to start in the first quarter of 2021.

Jung said medical personnel and the elderly population will be prioritized in the vaccination programs.

“A lot of Covid-19 deaths are taking place in nursing homes,” Jung said. “The elderly population have to be protected first, as well as medical personnel to ensure the health care system withstands the pandemic. […] We will be communicating closely with the public regarding the details of the vaccination programs.”

The Assembly put together a special session on Covid-19 on Friday and questioned officials of the Moon Jae-in administration overseeing the efforts to curb the spread of Covid-19 in Korea. 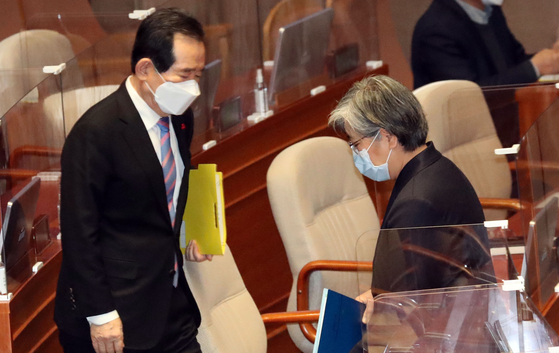 
Prime Minister Chung Sye-kyun, also among the officials questioned, said it seems Korea has finally passed the peak of its most recent wave of infections.

“In making a cautious assessment of the situation, I do believe that we have passed the peak,” Chung said in response to a question from a lawmaker. “As for what may have been the major causes of the latest wave of infections, we think there were several factors at work, such as loopholes in local quarantine measures and an increase in imported cases. […] We are hoping that continued adherence to the social distancing recommendations will yield better results in the future.”

Korea saw 674 new cases Thursday, the first time the number has dropped to the 600s in five days.

Korea’s cases were in the two-digits through most of October, before spiking to over 1,000 by mid-December, a record number of daily cases since the pandemic hit Korea earlier in 2020.

The weekly average of cases this week was 765, which is 211.3 less than last week’s average, according to the KDCA.

Korea has been implementing the Level 2.5 social distancing recommendation, the second-highest in its five-tier system, for nearly a month. Extra measures have been added to the Level 2.5 system recently, however, as the number of Covid-19 cases continued to spike. They include a nationwide ban on personal gatherings of more than five people.

Some businesses deemed to be more at risk of spreading Covid-19 have been shut down, such as bars that involve dancing, noraebang (singing rooms) and gyms. 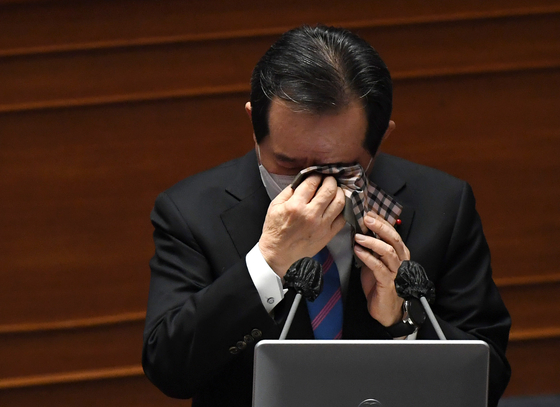 Prime Minister Chung wipes his tears after responding to a question about small business owners' crisis in the Covid-19 pandemic in Korea at a session at the National Assembly in Seoul on Friday. [YONHAP]


When questioned about the fate of the owners of small businesses not allowed to operate for nearly a month, Prime Minister Chung conveyed his apologies.

"Had we the laws and policies to help these self-employed business owners pay their rent whilst they are shut down, we would be implementing them immediately, but at the moment we do not yet have the means," Chung told the lawmakers at the Assembly. "We are discussing their situation earnestly at our meetings and we will come up with the right measures for them."

Of Korea’s new cases Thursday, 41 were imported and 633 local. The majority of the cases were based in the greater Seoul area, with 186 in Seoul and 236 in Gyeonggi.

The number of Covid-19 patients infected with the highly transmissible coronavirus variant sweeping Britain and South Africa reached 16 in Korea as of Thursday.

Are masks the best vaccine? (KOR)

Covid has infected 20% of Korea's population