A recent antibody study of over 3,000 randomly selected people in Korea shows herd immunity could be a nonstarter in the country.

Only one person tested positive on the antibody test, the Korean central government’s Covid-19 command center announced Thursday in a press briefing.

That’s 0.03 percent of 3,055 subjects examined, which is far short of the herd immunity threshold for the coronavirus, estimated to be 60 percent or higher by global health experts.

Local officials, however, refrained from drawing any decisive conclusions from the study Thursday, saying it lacked a national reach because it didn’t include citizens of Daegu, where a cluster in February remains Korea’s largest hot spot to date. Some 7,000 people in Daegu have been diagnosed with the coronavirus so far, accounting for nearly half of nationwide cases.

The Covid-19 command center said Thursday’s statistics were preliminary findings, and that the study would be broadened in the coming months to encompass more subjects, including people in Daegu and the surrounding province of North Gyeongsang, for a better look at Korea’s chance of developing herd immunity.

Herd immunity is achieved when the general population of a community — the herd — becomes immune to an infectious disease either through vaccination or immunity built through previous infections.

Several countries and cities around the world have been conducting herd immunity studies by running antibody tests on their general public, or looking for protective proteins made in response to a coronavirus infection, which can identify people who contracted the virus without knowing.

Health experts believe coronavirus antibodies may last only two to three months after a person has been infected.

In a release, the command center said other cities were also far off from herd immunity. In London, 17 percent of the population was found to have antibodies for the coronavirus, while the number was 7.3 percent in Stockholm and 0.1 percent in Tokyo. Spain, where nearly 300,000 people have been infected, the seventh-largest amount in the world, only had 5 percent.

“We predict there’s a very high chance that Korea has extremely low immunity to the coronavirus,” Kwon Jun-wook, deputy director of the Korea Centers for Disease Control and Prevention (KCDC), said during the Thursday press briefing.

“As anticipated from antibody studies conducted abroad, we think it’s impossible to fight the coronavirus through herd immunity,” Kwon continued.

For Korea’s latest study, the command center said it looked at 1,555 blood samples randomly collected from April 21 to June 19 as part of an annual health and nutrition examination survey conducted by the KCDC. No one had antibodies in that group.

Blood samples separately collected from 1,500 people who visited a health care facility in Seoul’s southwestern area — the districts of Guro, Yangcheon, Gwanak, Geumcheon and Yeongdeungpo — showed one person had antibodies. 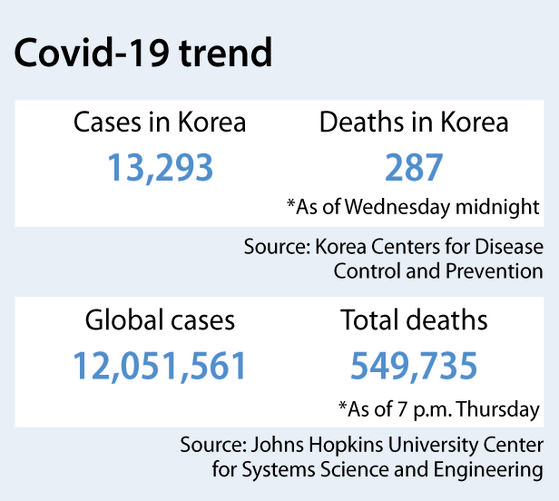 Nationwide, 50 more people were diagnosed with the coronavirus Wednesday, the KCDC said Thursday, bringing the total case load to 13,293. As of Wednesday at midnight, 287 people had died, up by two from the previous day, while 12,019 people had been declared fully recovered, up by 49 from the day before.

Among the 50 new cases, 28 were local infections: 15 in Gwangju, six in Daejeon, four in Seoul, two in Incheon and one in Gyeonggi. The rest were imported cases: six from Kazakhstan, three from Uzbekistan, two from the Philippines and one each from Iraq and Russia. Eight other people were infected in the Americas and one in an African country, KCDC data showed.

The Korean government said this week that the country’s most popular beaches — including Haeundae Beach in Busan and Gyeongpo Beach in Gangneung, Gangwon — will soon start fining visitors 3 million won ($2,150) if they eat or drink on the beach after official closing times, usually 6 p.m., in order to prevent virus transmissions.

The system can’t be sustained

Offers galore for vaccinated, except for travelers