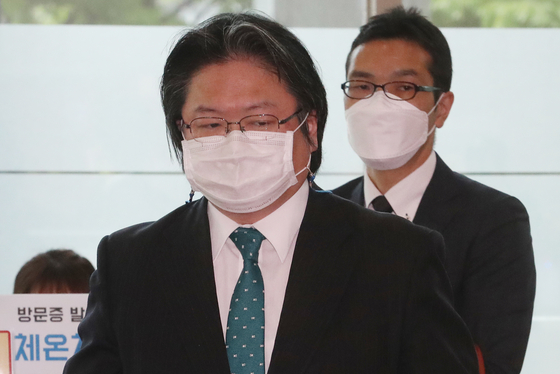 Japan in its latest Diplomatic Bluebook again asserts that the islets, which it calls Takeshima, are an “inherent part” of its territory and alleges that Korea continues its “illegal occupation” of Dokdo with “no legal basis in international law.”

The 2021 diplomatic report was reported by Japanese Foreign Minister Toshimitsu Motegi to a Cabinet session presided over by Prime Minister Yoshihide Suga.

This marks the first Bluebook under the Suga administration, which launched in September, amid continued strained relations between Seoul and Tokyo over historical issues and an ongoing trade spat.

Japan began including the terminology alleging Korea’s “illegal occupation” of Dokdo in the report since 2018 though it had previously asserted claims over the islets.

The diplomatic papers also urged the Korean government to come up with "responsible measures" regarding the issue of compensating victims of the Japanese military’s wartime sexual slavery.

Choi Young-sam, the Foreign Ministry spokesman, in a statement Tuesday urged Japan to immediately “retract” its claims to Dokdo and said that the Korean government will “sternly respond to any provocations” by Tokyo over the islets.

Seoul maintains that there is no territorial dispute as its easternmost Dokdo islets are historically, geographically and under international law an integral part of Korean territory. The Dokdo islets, effectively controlled by Korea, also serve as a painful reminder of Japan's imperialistic past and its 1910-45 colonial rule over the peninsula.

The Korean Ministry of Foreign Affairs in turn summoned Hirohisa Soma, the deputy chief of mission at the Japanese Embassy in Seoul, to lodge a protest over Tokyo’s latest claims over Dokdo.

Lee Sang-ryeol, the Foreign Ministry’s director-general for Asia and Pacific affairs, expressed regret to Soma, who in turn said he would convey Seoul’s position to his government.

Choi in the statement also stressed that the issue of the Japanese military’s wartime sexual slavery is recognized internationally as a “violation of women's human rights during wartime and a universal human rights issue.”

He urged the Japanese government to “act in compliance to the spirit of responsibly, apology and self-reflection” as expressed in the 1993 Kono Statement and the so-called comfort women deal of 2015.

Former Chief Cabinet Secretary Yohei Kono in a landmark statement in 1993 issued an apology for the suffering endured by the young women and girls coerced into sexual slavery by the Japanese military before and during World War II.

Seoul and Tokyo struck a deal under the former Park Geun-hye and Shinzo Abe administrations attempting to resolve the comfort women issue in December 2015 "finally and irreversibly,” which included an apology by the Japanese government and a 1-billion-yen ($9.2 million) fund for the victims of Japan’s wartime sexual slavery. The Moon Jae-in administration has called the agreement flawed and not a true resolution to the issue, however.

Japan’s latest Bluebook kept a passage describing Korea as an “important neighboring country” the same as last year. The 2017 diplomatic papers described Korea as “Japan’s most important neighbor that shares strategic interests,” a phrase that was deleted in 2018 and 2019.

The 2021 report also expressed “strong security concerns” over China's increased maritime activities in the East China Sea and the South China Sea, in more explicit wording than the previous year.