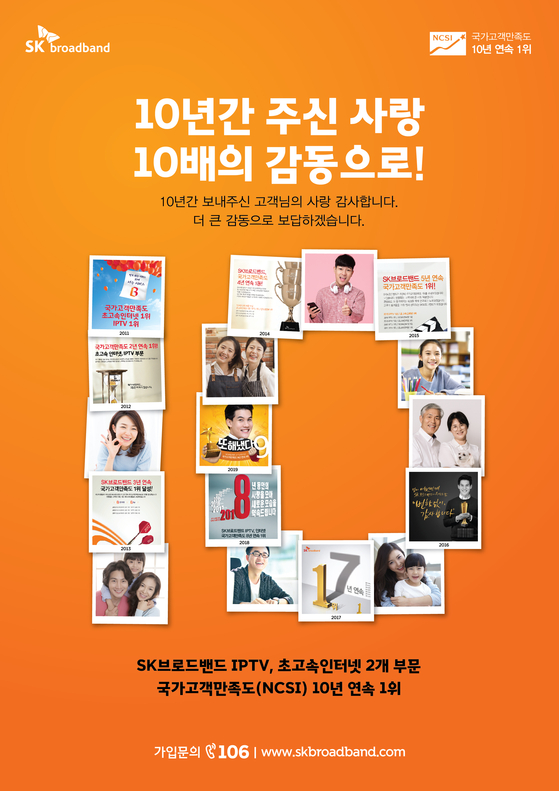 SK Broadband ranks No. 1 for the 10th consecutive year in the National Customer Satisfaction Index for its IPTV and high-speed internet service. [SK BROADBAND]

SK Broadband remains the frontrunner for its IPTV and high-speed internet service for the 10th consecutive year, according to the National Customer Satisfaction Index (NCSI) 2020 conducted by the Korea Productivity Center.

The key to the company’s success can be credited to its continuous focus on customer experience as seen through its customer advisory panels, launched in 2014, which convey the voices of customers from all walks of life via diverse activities such as a beta tests and in-depth interviews among others.

SK Broadband’s “customer first” philosophy was first announced last July with the reorganization of B tv into “Lovely B tv.” New services such as Ocean, Mobile B tv and ZEM Kids were launched, along with the Slim Plan which provides a 33 percent discount when subscriptions are made online.

Ocean, a monthly subscription service for films and foreign TV series, minimizes the chore of paying extra fees for the latest films and provides a wide range of popular content from major studios. Both the viewing time and the viewership have grown dramatically. Mobile B tv has also a 147 percent increase in the average number of daily visitors and an increase of 740 percent in the total hits.

ZEM Kids offers “Customized Recommendation Service for My Kid” and premium content, with a free diagnostic test for academic level and disposition. B tv strives to step up their game with various original content. “Pororo the Little Penguin” season 7, an all-time favorite in Korea, is exclusively available on the B tv.

Since merging with T-Broad, SK Broadband has been constantly improving its B tv cable service and the quality of its Giga internet.

SK Broadband earned the highest mark in high-speed internet service in the User Protection Evaluation by Korean Communication Commission. It was also highly recognized for the Cyber Security Service based on big security data.

As of last September, more than 8.5 million people have subscribed for the paid-channel service of SK Broadband, highest net addition of subscribers in four years. There has been a 20.3 percent increase in sales during the third quarter of last year, bringing in total revenue of 966.8 billion won. Operating income has also shown an increase of 78.8 percent from the same period as a year ago.