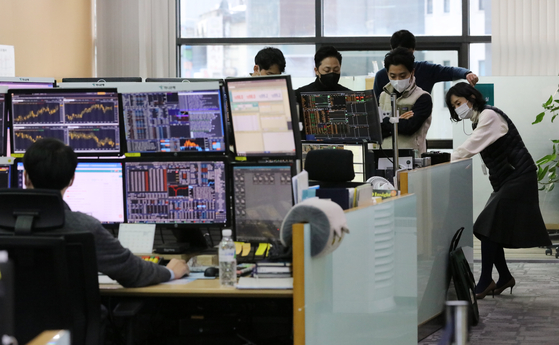 Short selling will again be permitted from March 15, and now all eyes are on the index to see whether the oft feared practice will do a number on stocks and kill the bull market.

The Financial Services Commission (FSC) on Monday said the temporary ban on short selling, which was implemented due to share price volatility caused by the pandemic, will end on March 15, a year after it went into effect.

Short selling is when an investor borrows stock and sells that stock immediately in hopes of buying it back later at a lower price, repaying the loan and profiting from the difference. Proponents say it improves liquidity, price discovery and takes the edge off of bubbles. Critics contend that it drives down prices.

When the FSC banned short selling on March 13, 2020, it argued that the practice was responsible for the drop in share prices. Restrictions were to be lifted in September, but after a resurgence of Covid-19, the government decided to extend the prohibition for another six months.

Since last month, the government has been preparing for an end to the ban.

As the practice is again allowed, regulators will put into place certain safeguards. It will up penalties on illegal short selling, while it will also work to make the practice more accessible to retail investors.

These discussions and the eventual decision to allow short selling came as the market rose dangerously fast and as the government started to become more concerned about a bubble than a crash.

“I am conflicted, with anxiety and expectation, as we face an era of a 3,000 Kospi,” FSC Chairman Eun said during the FSC meeting last week. “Most important is being able to invest within one’s capacity while analyzing strictly the company’s performance.”

Eun wasn’t the only top government official concerned about retail investors aggressively jumping into the stock market driven mainly by a fear of missing out.

Stocks, which tumbled to their lowest level in more than a decade in March 2020, have risen sharply, with the benchmark index ending the year at an all-time high of 2,873.47. It broke 3,000 on Jan. 7 as punters continue to pile in.

Government officials have been warning retail investors about borrowing money to buy stocks.

“As of Jan. 8 this year, unsecured loans borrowed from five major banks this year alone totaled 217.9 billion won [$198.3 million],” said Doh Kyu-sang, FSC Vice Chairman on Tuesday. “While it still shows stability, there are worries of excessive leverage being used in asset investment.”

Retail investors and ruling party lawmakers have been against the government lifting the ban on short selling. A recent petition was made to the Blue House for the prohibition to be made permanent.

Democratic Party lawmaker Yang Hyang-ja said the government should seriously reconsider extending the ban on short selling, citing the negative effect it has on the Kospi.

FSC Chairman Eun last month said the financial authority is working to simplify retail short selling, as the practice is complex, expensive and highly risky, so much so that it is mainly a practice for institutions.

Eun said while he is not too thrilled about retail investors participating in short selling, he said the FSC will make changes to regulations to meet the demand for a level playing field.