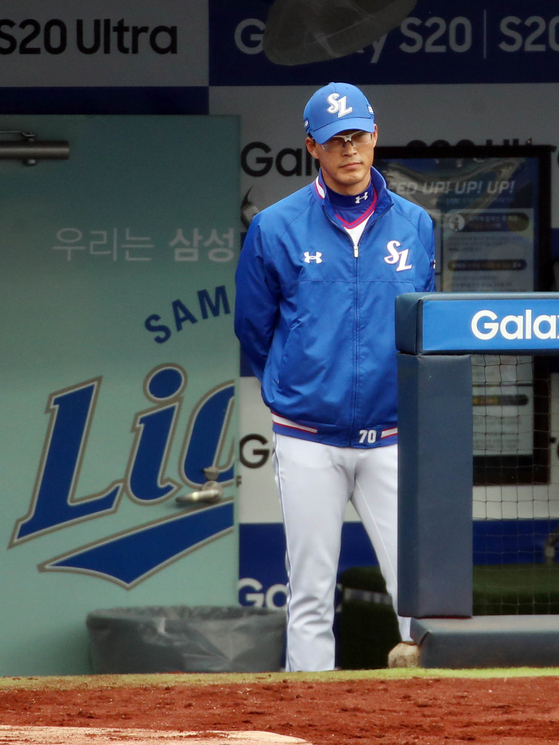 
While Heo may be all smiles on the outside, he is as cold-hearted as any manager needs to be when it comes to evaluating his team’s performance last season.

And there is a need for evaluation. The Lions finished eighth in the 2020 season with a record of 64 wins, five ties and 75 losses. Compounding the disappointment, the Lions went from competing for a playoff point midway through the season before falling apart in the second half.

Although it was Heo’s first season as Lions manager, it was the fifth straight season that the club has failed to advance to the postseason, an achievement made particularly notable considering they had been the team to beat for years before that. Last season, Heo’s appointment as manager came as quite a surprise as he was the club’s former head of data analysis.

Using his background as a data analyst, Heo came up with an unexpected strategy, having all his position players take on multiple positions. When it came to signing a foreign position player, the Lions chose Tyler Saladino, a slugger with the ability to play both infield and outfield.

In terms of the batting lineup, Heo also regularly made changes.

Saladino failed to live up to expectations early in the season, and as he did start to adjust to the KBO, he suffered back pain and left Korea. Shortstop Lee Hak-ju, playing his second season, also struggled.

Koo Ja-wook, who had been moved to the left field, returned to the right field, and the club struggled to find any consistency in either first baseman or designated hitter.

“I was on the scene for a while [as a member of the front office], but the pressure as a manager was different,” Heo said. “I won’t repeat my mistakes.”

To overcome their weaknesses, the Lions were quick to make a move in the offseason free agent market. They signed free agent Oh Jae-il on a four-year contract and brought in foreign outfielder Jose Pirela.

“I got a great present [in the addition of Oh],” Heo said. “Oh Jae-il will be a great help in defense. Pirela was a player that I’ve had my eye on for a year.”

With the addition of the two sluggers, Heo already has an idea as to how his batting lineup’s going to look this upcoming season.

“Starting in the second half of last season, I had a set middle-of-the-line batting lineup,” Heo said. “It’ll continue this year. It’ll be in the order of Koo, Kim Dong-yup, Oh and Pirela. Kim Dong-yup will be designated hitter while Pirela will be the left fielder. I’m still undecided on a leadoff batter. It’ll be between Kim Sang-su and Park Hae-min.”

As for shortstop Lee, Heo is willing to give him one last chance.

“I’ve regularly seen him train at the ballpark in the winter,” Heo said. “He’s minimized the number of errors compared to the 2019 season. As for Lee’s competition, I’m thinking of Kang Han-wool and Kim Ji-chan. Kang Han-wool can also cover third base. Last year, I put Kim Ji-chan in the outfield a lot to give him more chances, but this year, I’m going to use him as an infielder only. In terms of catchers, it’ll be Kang Min-ho and Kim Do-hwan as a backup.”

Since Samsung didn’t have the best season, they were also one of the clubs that received a lot of trade offers — with most of them being bullpen pitchers.

While Samsung has a highly rated bullpen full of veteran pitchers, Heo still isn't that confident.

“They are great players,” Heo said. “But not many of them have the ability to strike out [batters]. We’re not in a situation to give away players. We need to increase the quality and quantity of bullpen pitchers.”

Looking at the Lions’ starting rotation last season, it was led by foreign pitcher David Buchanan and Choi Chae-heung. Buchanan was the Lions’ first pitcher in 22 years to pick up 15 wins in a single season.

Choi managed to toss a total of 146 innings, the second most after Buchanan, and finished the season with 11 wins and six losses, with a 3.58 ERA.

The starting rotation is expected to be similar this year. The only chance will be that Ben Lively and Won Tae-in will be added to complete a four-pitcher rotation. Along with that, Heo is thinking of having bullpen pitchers switch between starter and long reliever.

“It’ll be my second year as manager,” Heo said. “I have no more excuses. I’ll turn it into a year where the fans don’t have to walk away disappointed.”