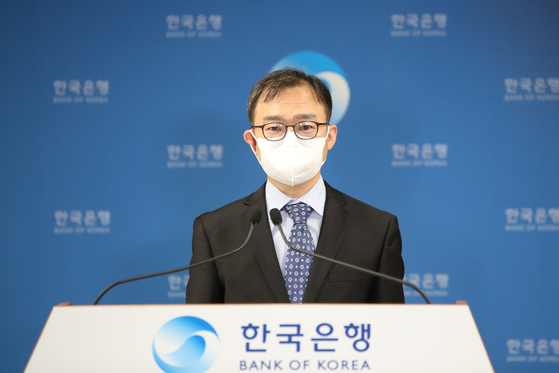 Song Jae-chang, head of monetary and financial statistics team at the Bank of Korea, speaks during an online briefing held Tuesday. [BANK OF KOREA]

Household debt hit a record 1,765 trillion won ($1.6 trillion) in the first quarter largely due to continued increases in mortgage lending and lending for stock investment, the Bank of Korea said Tuesday.

The statistic includes household loans from banks, insurers and other private and public lenders and credit card debt.

"In the first quarter of last year, there was little demand for loans for living expenses or stock investment as it was the quarter when the coronavirus started spreading," said Song Jae-chang, head of the monetary and financial statistics team at the Bank of Korea during an online briefing Tuesday. "This year, there has been a steep increase in loans as the Covid-19 pandemic lasted for a long time."

The steep increase in credit card debt was due to a recovery in consumer sentiment, Song said.

With the country's central bank holding its key interest rate at a record low of 0.5 percent since May last year, the snowballing debt is making it difficult for the bank to make up its mind on when to raise rates.

Recovery in the global economy, as well as the in the country's exports and consumer sentiment, suggests the bank should tighten its monetary policy, but a rate increase at a time when households are heavily indebted could deal a heavy blow to the country's financial system.

Eyes are on the decision to be made at the monetary policy board meeting on Thursday. While industry analysts still expect the board to hold rates steady for now, comments could indicate a rate increase in the near future.

"It's likely for the monetary policy board to hold the rate," said analyst Lee Mi-seon from Hana Financial Investment. "We project the central bank will increase the base interest rate by 25 basis points in January or February next year."