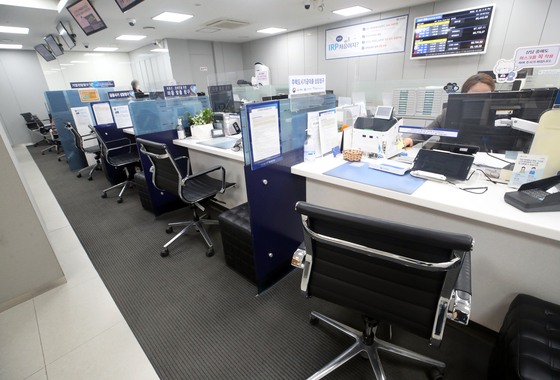 Loan office at a local bank in Seoul is empty in December last year as the country's financial authorities asked banks to tighten loans to households to slow debt growth. [YONHAP]

"Household debt growth usually slows in January affected by year-end and beginning of the year bonuses," said Yoon Ok-ja, an economist in the financial market affairs team at the bank said during a briefing held Wednesday. "The month is also a low season for house purchases."

From the end of last year and continuing into this year, households scrambled to borrow money to buy houses or for jeonse (a long-term lump-sum deposit lease) as house prices continued to soar.

Yoon added that some households continued to borrow to invest in stocks, while some others borrowed preemptively on the fear of loan regulations tightening again soon.

According to data from the Ministry of Land, Infrastructure and Transport, 50,000 apartments were traded in August. That number grew to 67,000 in October and 89,000 in November. In December, house purchases remained active, with 83,000 units traded.

The country's financial authorities ordered banks to tighten and reduce loan programs at the end of the year as household debt quickly snowballed last year.

In January, most banks resumed their major loan programs, pushing household borrowing back up.

Companies' borrowing from banks increased by 10 trillion won in January to 986.3 trillion won.

In December, the borrowing had declined by 5.6 trillion won.

December is usually a month for companies to pay back their debt to improve their balance sheets, Yoon said. In January, companies generally run up their debt again.

As for small and medium-sized enterprises, borrowing demand in January increases especially as they need to pay the value-added tax.