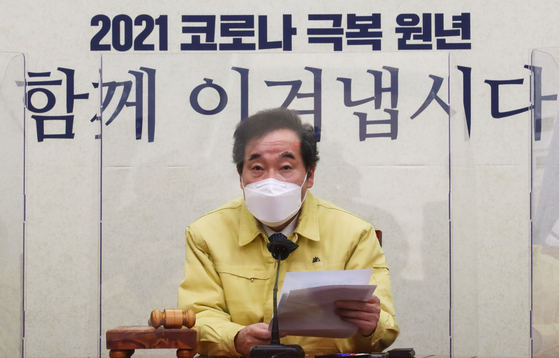 Chairman of the Democratic Party Lee Nak-yon gives an opening statement during a committee with the party's top aides on Wednesday. [OH JONG-TAEK]


IT companies are angry about a policy being pushed by the ruling party, saying that it could stifle innovation and hobble corporations.

The profit-sharing concept calls for companies to distribute earnings to employees based on certain benchmarks of performance. For manufacturers, gains from the sale of items developed by the employed could be distributed to those who helped with the development.

Under the plan, internet companies would pay bonuses linked to traffic, while others might pay workers a percentage of profits.

The idea is getting a boost from the pandemic, as income disparities have been exacerbated during the crisis, with workers apparently getting poorer and large corporations, their shareholders and executives seeming to be getting richer.

“The profit-sharing policy is a restorative measure in order to make Korea a country where everyone lives well together instead of neglecting the most inequitable recession in history,” said DP Chairman Lee Nak-yon.

Lee went on to emphasize that the policy is based on the voluntary participation of the private sector, drawing attention to the idea of developing a mutual and collaborative model appropriate in the age of competition among platforms.

Tech executives are particularly incensed, though no one would go on the record to explain their concerns.

One said that IT companies will be harmed as most are in their earliest stages of development. The head of an IT organization said that while he agreed with the concept he wondered about the implementation of it, asking whether Google or Amazon will be made to share their profits.

People in tech believe only domestic companies will be forced to make payouts "voluntarily."

They claim that the side effects of the policy will do more damage than the intended good. It will be difficult to objectively evaluate whether a company’s profits are from the coronavirus pandemic, they note. Delivery apps, which are seen as beneficiaries of the pandemic, have already invested trillions of won in technology, service development and marketing for the past decade. Even though the turnover for some companies from orders are in the trillion-won range, the app operators are still losing money.

“The government needs to acknowledge that platform companies are reaping the gains earned from investments that involved risks,” said Yoo Byung-joon, a business professor at Seoul National University. “The movement to lower the 30 -percent commission on Google’s app market gained traction because there was a general agreement that Google already reaped enough profit.”

“Government intervention is necessary when the platform commissions are excessive, but it needs to create the environment, instead of directly intervening in the market.”

There are concerns from the public that the method of confiscating gains will eventually hurt innovation. When companies make a lot of money, the government needs to create a virtuous cycle that encourages employment and investment. Critics say that the government is trying to block the cycle instead, with politicians pushing forward with the showy measures ahead of the mayoral election in April.

In the third quarter of 2020, Coupang hired 13,700 new employees, with a total headcount above 40,000. The e-commerce company is the third-biggest employer in the country after Samsung and Hyundai Motor. As of June, venture companies employed a total of 667,699, 4.3 percent more than in the previous year.

An IT executive argued that money should be reinvested rather than paid out in a move that seems designed to help politicians facing election. Others say that the government’s policy ignores the voluntary efforts made by corporations.

Woowa Brothers, the operator of Baedal Minjok, the country’s largest delivery app, spent 78.8 billion won ($71.9 milliioni) on advertising and other expenses. Kakao Pay made the commissions for its offline affiliated businesses free from March to June. Kakao gave 100,000 won worth of credit to small-business owners that used the KakaoTalk Channel.

Besides making donations and sponsoring commissions for small-business owners that use Naver’s services, Naver provided for free the map for publicly distributed masks, QR codes for check-ins at offline businesses and IT infrastructure to be used at schools.

“Without the help of IT and platform corporations during the coronavirus pandemic, the government’s policies including social distancing measures would have not been as effective,” said Yoo Hyo-sang, a professor at the Graduate School of Business Administration at Soongsil University.

The coronavirus profit-sharing policy comes from the government’s profit-sharing policy, which is one of the 100 national political agendas of the Moon Jae-in administration. The policy states that the government must give incentives to companies that voluntarily share their profits with independent small businesses that contribute to projects. The proposed profit-sharing policy is an expanded version of the performance sharing policy in 2006, which was limited to companies in consignment relationships. The Ministry of SMEs and Startups proposed plans to implement the policy in November 2018, but failed to institutionalize it due to the backlash from the financial sector.

A statement from late Samsung Chairman Lee Kun-hee is being used by IT industry professionals to support their position. In 2011, when the Korea Commission for Corporate Partnership proposed that the surpluses of chaebol be poured into a fund for mutual growth, Lee directly criticized the ideas, saying that he “cannot tell whether it is an expression that is used in a socialist country, capitalist country or communist country.”