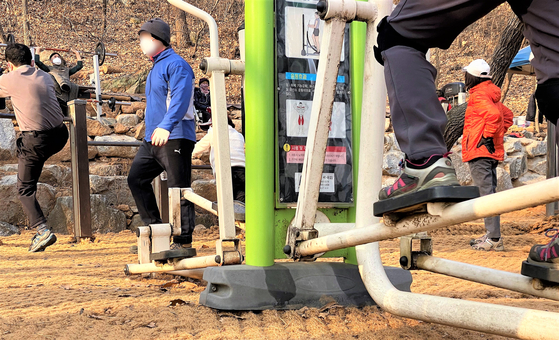 People make use of a public outdoor exercise area in Gyeonggi after gyms were forced to shut down due to stricter social distancing measures. [KIM HONG-JOON]


With all the gyms closed down due to the stricter social distancing measures that went into effect last month, people are heading outdoors to nearby parks to make use of exercise equipment installed by the government that is free to use. Others are on the hunt to find new outdoor sports to participate in.

Kang Hyeong-jin, a 49-year-old who lives in Goyang, Gyeonggi, is one such person who turned to the outdoors to exercise.

“Since the gym I usually go to is closed for a month, I felt the itch to go work out,” said Kang.

Korea has about 9,900 fitness centers according to KB Financial Group’s research center in October, but all of them have been shuttered since Dec. 8 as the government enforced stricter social distancing measures.

Kang was quite surprised about what he witnessed when he first started working out on a nearby mountain. First of all, it was crowded with so many people trying to get some exercise done and secondly, everyone that was there seemed to be really enthusiastic about getting their workout done for the day.

The sansjang that Kang goes to is about 1,200 square meters (12,900 square feet) in size and about 30 people were working out there when he visited on Jan. 5.

One man in his 60s, who has been coming to the sansjang for more than a decade, said that new faces, especially ones who seemed to be in their 20s, are now using the same facilities as him. He thinks the number of people that come to the sanjang during the peak time from 11 am. to 2 p.m. has doubled these days compared to December.

Bae Tae-wang and Park Jae-yeon, 23-years-olds from Goyang are some of the folks from the younger generation that recently started frequenting these outdoor exercise facilities after their gym was forced to shut down. Even fitness YouTubers have been recognizing the shift and uploading videos introducing these outdoor facilities as a substitute to gyms. 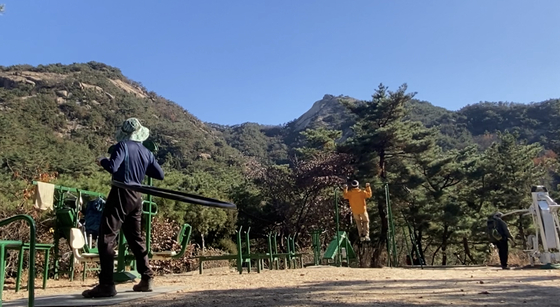 
It's not just smaller mountains that have these sansjang, but also major ones like Mount Bukhan. Many of these outdoor gyms were first erected in the 1960s and 70s.

“Forget comparing the quality of the machines you find at your indoor gym and outdoor spots. It is just very charming to be out here surrounded by the nature,” said Oh Chang-hyeon, a 49-year-old from Dobong District, northern Seoul.

Kang Hyeon-uk, a 37-year-old of Seodaemun District, central Seoul, said he started coming to outdoor areas to exercise as he feels scared to workout indoors.

However, some raise concerns about the increased crowds due to the increased popularity, especially those who had been avid users of these outdoor exercise facilities before the pandemic hit. Kim Su-min, a college student from Gyeonggi, stopped using the outdoor areas after hearing complaints about all the new faces.

In response to such concerns, the Seoul city government has allowed each district office to have a final say on whether or not it will keep exercise areas open depending on how crowded they are. For Mapo District, in western Seoul, for example, 143 outdoor workout spots out of some 500 have been closed. 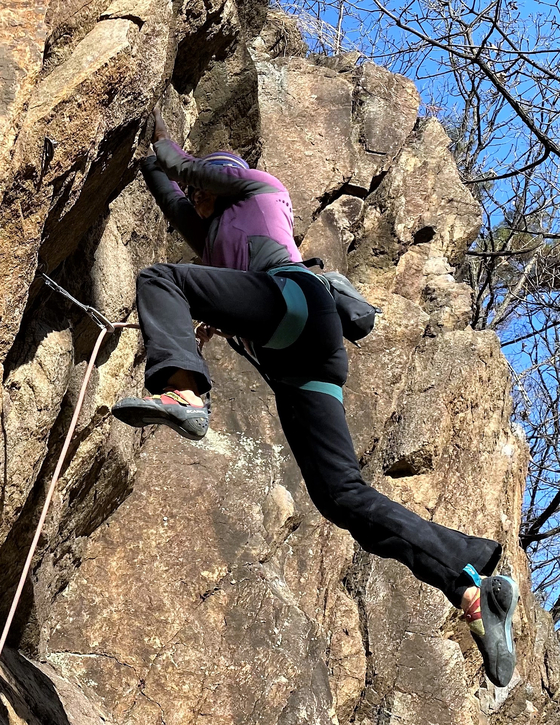 Climbing has remained popular even in winter, which is commonly the low season for the activity. [KIM HONG-JOON]


To avoid overcrowding, some have been turning to mountain climbing or playing badminton at outdoor courts.

Winter is usually the low season even for avid climbers, but since all the indoor climbing centers are closed, they have been heading outside to natural rocks to climb. With a ban on gatherings of up to four people, small groups are getting together to exercise.

But the newfound popularity of some climbing spots means there are often lines to wait in. Climbers have been leaving their climbing shoes to mark their spots, and sometimes the wait is up to two hours.

Outdoor badminton courts are seeing a surge in popularity. Before the pandemic hit, many preferred indoor centers where it’s cool in the summer and warm in the winter. But now, with few other options, people are bracing the freezing weather to enjoy a game or two.

Experts say it might be easy to assume these outdoor spots are relatively safe, but users should still stay cautious especially because no lists are kept to see who used the facilities. So in case of a Covid infection, it would be hard to track and trace those who have potentially been exposed.

A month has passed since sports centers and gyms have had to shut their doors and many are calling on the government to be more lenient about social distancing measures.

“About 7 million won [$6,400] a month is needed including rent, and we can't sustain ourselves with just the subsidiaries coming from the government,” said one official with a sports center, explaining that they decided to open up their doors and take the risk of being fined up to 3 million won.

Many related to gyms or sports centers say that even under the Level 2.5 social distancing measures, the facilities don't need to be closed completely, just like how restaurants where people have to take off their masks to eat are operating with some restrictions.

With the current social distancing guidelines in place until Jan. 17, many hope to see more lax rules to come.

[FOOD COURT] Get nostalgic with some classic American cheeseburgers