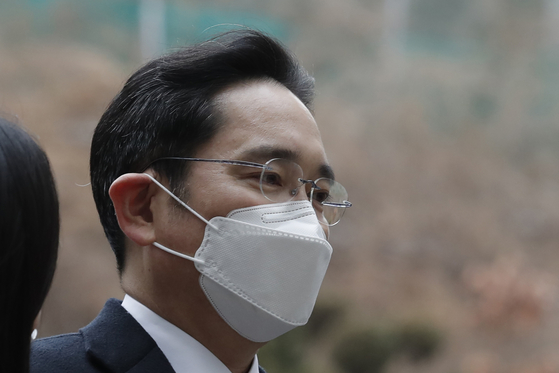 Samsung Electronics Vice Chairman Lee Jae-yong arrives at the Seoul High Court in Seoul on Monday. Lee was sent back to prison Monday after a court sentenced him to two and a half years over his involvement in a 2016 corruption scandal that spurred massive street protests and ousted Korea’s president. [AP]


Samsung's leader Lee Jae-yong was sent to prison Monday after an appeals court convicted him of giving bribes to former President Park Geun-hye and a friend and sentenced him to two and a half years in prison.

In a retrial ordered by the Supreme Court in August 2019, the Seoul High Court on Monday found Lee guilty of giving bribes worth 8.6 billion won ($7.8 million) to Park through her longtime friend Choi Soon-sil for political favors.

Asked by the court to make a statement after the conviction and the prison sentence were announced, Lee remained silent. After three judges who presided over the case left the courtroom, Lee had a brief conversation with his lawyers and was taken into custody.

It was second time that the 52-year-old tycoon was locked up. He was released from prison after 353 days in February 2018 when his initial appeals trial reduced a five-year prison term for bribery to a suspended sentence.

After the court session, Lee was transferred to Seoul Detention Center in Uiwang, Gyeonggi. Since he spent nearly a year in detention, he has one year and six months left to complete his term.

Lee and other Samsung leaders were indicted in February 2017 on charges of bribing Park through Choi in return for the president putting pressure on the state-run National Pension Service to support a controversial merger between Samsung C&T and Cheil Industries in 2015. The merger, realized with the pension service’s voting power, strengthened Lee's control over Samsung Group after his father, Lee Kun-hee, was hospitalized in 2014 following a heart attack.

An independent counsel probe into the presidential scandal started in December 2016 following Park’s impeachment by the National Assembly earlier that month. In February 2017, the independent counsel concluded that Lee had offered bribes worth 29.8 billion won and promised to offer another 21.3 billion won to Park and Choi. Lee was charged with giving bribes and detained through his initial trial and appeal.

The amount of bribes Lee paid Park and Choi became a crucial factor throughout his court battle. The Seoul Central District Court initially ruled in August 2017 that Lee was guilty of paying a total 8.9 billion won in bribes and sentenced him to a five-year prison term.

In February 2018, the Seoul High Court reversed some of his bribery convictions and ruled that the total amount of bribes he paid was 3.6 billion won. With the lowered amount, Lee’s sentence was slashed to a suspended jail term of two years and six months. Lee was freed immediately after that ruling.

The Supreme Court, however, ordered a retrial of Lee, overturning the high court’s dismissal of key bribery convictions. In August 2019, the highest court ruled that the Seoul High Court’s view of what constituted bribery in Lee’s appeals trial was too narrow. With the Supreme Court’s determination, the amount of bribes given by Lee totals around 8.6 billion won.

The key issue in the high court’s retrial was whether it would hand down a prison term heavy enough for Lee to return to jail.

According to a law on punishment for special economic crimes, any bribe 5 billion won or over warrants a prison sentence of three years or more. A prison term of more than three years cannot be suspended. The Criminal Act, however, allows a judge to use his or her own discretion to reduce a prison term. Speculation, therefore, was made that the court would use its commutation power to hand down a prison term less than three years and suspend it, but the court did not exercise that power.

Throughout the retrial, Lee asked for leniency, citing his conglomerate’s establishment of a compliance committee to counter any possible illegal management activities in the future and his vow to prevent a fourth-generation management of the group by his children. A promise to scrap the conglomerate’s anti-union policy was also made.

The court said Monday that it was inappropriate to slash his sentence because of the establishment of a corporate compliance committee.

It remains to be seen if Lee will appeal the ruling since the Supreme Court will likely uphold the latest high court decision. According to the Criminal Procedure Act, no appeal is allowed for a conviction of less than 10 years of prison term if it is meant only to reduce the sentence.

Separate from the presidential bribery trial, Lee was indicted in September 2020 on charges of violating the country’s capital market laws. After a 21-month probe, prosecutors concluded that Lee and other top executives broke laws during the merger of Samsung C&T and Cheil Industries in 2015.

Lee has maintained his innocence in the second case, and his lawyers argued that the probe had a malicious political intention. That trial is proceeding at the Seoul Central District Court.