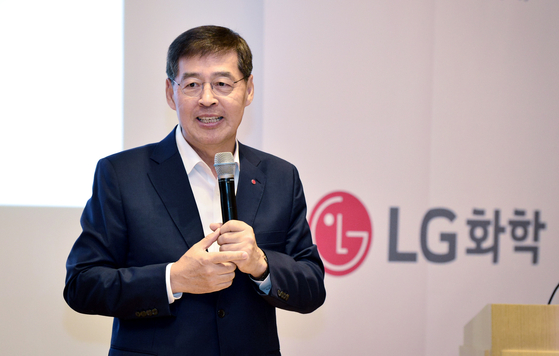 
LG Chem’s Vice Chair and CEO Shin Hak-cheol was invited to appear on a panel at the World Economic Forum (WEF), the company said Wednesday.

The petrochemical and materials company head will participate in the online panel discussion “Mobilizing Action on Climate Change.” This year’s WEF will be held online in late January, instead of the conventional venue in Davos, Switzerland, due to the coronavirus pandemic.

During the panel discussion, Shin will introduce the company's drive to realize “carbon neutral growth” by year 2050 — including investing in technology to cut emissions, increasing use of renewable energy and compensating for emissions in ways like developing forests.

Introduced in July 2020, the “carbon neutral growth” initiative refers to offsetting the increase of carbon emissions, keeping it at 2019 level, even as business grows. In the following months, LG succeeded in developing several degradable materials and embarked on shifting power source for its production facilities to renewable electricity.

Tokyo Governor Yuriko Koike, Swiss RE Group CEO Christian Mumenthaler and China’s Minister of Ecology and Environment Huang Runqiu will be taking the stage at WEF with Shin to discuss climate change. Leaders of more than 70 global firms have registered to watch the event, LG said, and the session will be streamed live to WEF members.

Shin’s participation in the panel discussion was made possible thanks to a strong recommendation from Dominic Waughray, a WEF director, the company said.

As a member of the annual event’s managing board, Waughray conducted interviews with chief executives of more than 60 global firms in putting together the WEF’s “The Net-Zero Challenge” report last year. Shin was interviewed in November and was recommended to be a session panel afterwards.

“It’s meaningful that the session in which Vice Chairman Shin will be partaking deals with climate change — an agenda item the World Economic Forum has been putting a particular emphasis on in recent years,” LG Chem said in a Wednesday statement.