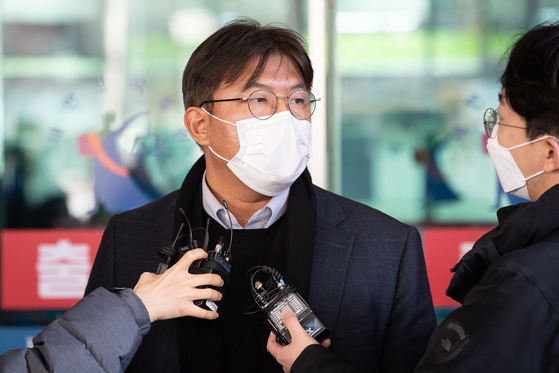 The lawyer of one of the two professors at Yonsei University facing arrest warrants for corruption answers questions from the press at Seoul Western District Prosecutors' Office on Wednesday. [NEWS1]


Prosecutors recently applied for arrest warrants for two professors at Yonsei University over suspicions of admissions hanky panky on behalf of the daughter of a former vice president of the university.

The Seoul Western District Prosecutors’ Office announced Wednesday that it requested arrest warrants for two professors at one of Korea’s top universities earlier in the week over corruption allegations.

The case has already implicated eight other professors at Yonsei.

According to the ministry, Lee’s daughter applied to a graduate program in business at Yonsei and tested in the average range in the first round of admission tests, which was a written test. Her score placed her ninth amongst 16 applicants in the specific admission track she selected, according to records at the university obtained by the ministry.

She aced the round that followed, which was an interview, earning a perfect score.

The ministry found reason to suspect that 10 professors involved with admissions may have colluded to give Lee a high score in the interview round. She was the only one out of 16 applicants on that admission track who was admitted to the graduate program at Yonsei that year.

The ministry reported the case to prosecutors last April. Prosecutors raided the offices of the 10 professors in October.

“After the investigations are completed, we will be discussing possible disciplinary measures against these professors,” a staff member of the university told the JoongAng Ilbo on Wednesday.

The Education Ministry said it will audit all major universities in the greater Seoul area, which includes Seoul, Gyeonggi and Incheon, through 2021. The inspections, which began in earnest in 2019, have unearthed several cases of possible corruption in admissions across top universities including Yonsei, Korea and Hongik universities.

Cho’s son was suspected of being admitted to Yonsei in 2018 through illicit means, including submission of fabricated credentials to the university. When the ministry searched the records of the university, it found that all admissions records for students admitted from 2016 to 2019 had been destroyed.