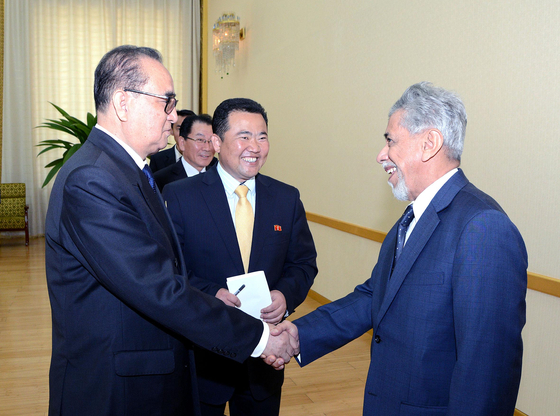 Ryu Hyun-woo, North Korea's former acting ambassador to Kuwait, is pictured at center in this state media photograph, accompanying North Korea's foreign minister at the time, Ri Su-yong, left, in a meeting with Omani envoys in Pyongyang in 2015. [YONHAP]


North Korea's former acting ambassador to Kuwait has been living in South Korea since defecting in 2019, according to multiple sources on Monday.

Ryu Hyun-woo came to South Korea with his family in September 2019, the sources said. His wife is the daughter of a man at the top of the power elite in Pyongyang, who ran Room 39, an infamous part of the Kim dynasty's bureaucracy.

Maeil Business News, a local media outlet, in an exclusive report Monday quoted Ryu as saying he fled the North “in order to provide a better future for my children.”

News of the defection came just months after another high-ranking diplomat, former acting Ambassador to Rome Jo Song-gil, was confirmed to have resettled in South Korea since July 2019. The two diplomats defected to Seoul only weeks apart.

Rep. Thae Yong-ho, himself a former North Korean diplomat who was elected to the National Assembly last April, told the JoongAng Ilbo that Ryu is married to the daughter of Jon Il-chun, who oversaw operations of North Korea’s infamous Room 39 for over a decade.

Jon is believed to have served as deputy head of the body from 1998 until 2010, when he was promoted to its director.

“It’s not easy to step into a position [like his] because it handles money, but once you’re in, it’s a position you occupy for decades.”

Comparing Room 39’s director to a palace treasurer who must be intimate with the regime’s leaders, Thae claimed Jon shared a “personal relationship” with former North Korean leader Kim Jong-il dating back to their days attending the same middle and high school.

Jon was close to the family long before Kim Jong-un was designated his father’s heir, Thae added.

Jon has not been seen in public since 2012, shortly after Kim Jong-un took power, though he was included as an alternate member of the Workers’ Party Central Committee in 2016.

Thae said he heard Jon had effectively stepped away from public duties years ago due to advanced age.

According to Maeil Business News’ report, Ryu became charge d’affaires in the North’s sole Gulf region embassy in Kuwait in September 2017, after then-Ambassador So Chang-sik was expelled from the country following the adoption of a United Nations resolution on the North.

He is believed to have built a long career at the North’s Foreign Ministry due to his fluency in Arabic, and also worked to export North Korean arms to Middle Eastern countries like Syria, the report said.

Since his arrival in South Korea, Ryu has been delivering lectures on North Korea to private audiences, the report added.