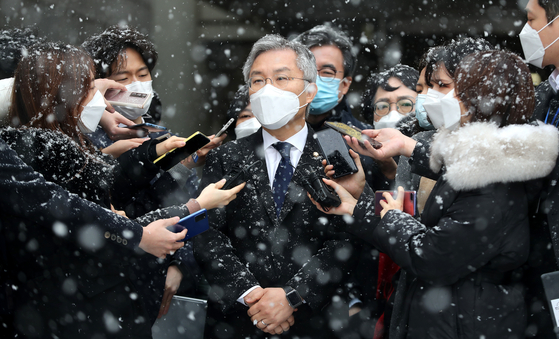 According to Judge Jeong Jong-geon, the certificates said Cho's son had worked as an intern at Choe's law firm from January till October 2017 for 16 hours, coming in to work twice a week.

"If he had done so for nine months, it means he worked for an average of 12 minutes every time he showed up," Judge Jeong said. "It seems there is not much he could have done in 12 minutes."

The judge also citied testimonies of the law firm employees, claiming they had not seen any intern working regularly as grounds for his ruling.

If the conviction and sentence are upheld and finalized through appeals trials, Choe will lose his lawmaker seat. The law states a lawmaker who receives a prison sentence, suspended or not, will lose his or her seat.

Cho, who served in the Blue House post from May 2017 until July 2019, became justice minister in September 2019 but stepped down after a mere 35 days amid an investigation into financial and academic scandals involving him and his family.

The prosecutors then indicted Choe for issuing the certificates after a separate but related investigation. Cho's son included the documents as part of his application to the graduate schools of Korea University and Yonsei University and got accepted.

The conviction can also affect an election law violation trial that Choe is currently standing. Choe was indicted on charges of making false information public by denying the allegation of the fake internship documents.

The ruling will also affect the trials of Cho and his wife, Chung Kyung-sim. They were indicted on charges of forging various documents to help their son's and daughter's undergraduate and graduate admissions. One of the charges claims Cho and Chung had used the false internship certificates issued from Choe in 2017 to fabricate more fake internship certificates dated in 2018.

Choe said he will immediately appeal. "I got the impression that the court was blinded by the prosecution's unilateral claims," he said.

Meanwhile, the public continued to demand Cho's daughter, Cho Min, be stopped from pursing her career as a doctor. Her acceptance to Pusan National University's (PNU) medical school in 2015 was based on forged documents produced by her parents.

While her parents were undergoing trials on charges of falsifying internship certificates to help her get into Korea University and PNU medical school, Cho Min took her medical licensing exam earlier this month and passed. She recently applied for an internship at the National Medical Center.

On Dec. 23, the Seoul Central District Court found Chung guilty of fraud and sentenced her to four years in prison, which she immediately appealed. The court ruled that Cho Min's internships at prestigious institutions, including Dankook University's Medical Science Research Institute and the Korea Institute of Science and Technology, were all fabricated, and that Chung had forged the certificates for her daughter.

Public pressure grew on PNU to void its admission of Cho Min. Organizations representing professors and students from around the country pressured PNU to revoke Cho's admission as soon as possible. The university responded it will wait until the Supreme Court ruling.

A civic group, the People's Coalition for a Fair Society, filed a petition on Monday requesting the Ministry of Education conduct a special audit on PNU's student admissions process.

"When the admission scandal erupted for Chung Yoo-ra in 2016, the Education Ministry sent 12 auditors and conducted a special audit on Ewha Womans University," Lee Jong-bae, head of the civic group, told the JoongAng Ilbo. "Based on the outcome, the ministry forced the university to cancel Chung's admission."

If the ministry refuses to conduct an audit, the coalition will file a criminal complaint to the prosecution against Education Minister Yoo Eun-hye for dereliction of duty, Lee said.

The opposition People Power Party agreed the ministry must conduct a special audit.

Minister Yoo said Wednesday in an interview with CBS Radio that Cho Min's case is different from Chung's case.

"When Chung's scandal erupted, the ministry still had jurisdiction," Yoo said. "But in Cho Min's case, when the allegations were raised in 2019, the prosecution was already investigating the suspicions and confiscated all data. Therefore, it is hard to conduct an audit."
BY SER MYO-JA   [ser.myoja@joongang.co.kr]