Greed and desperation drive the young into big stock bets

Greed and desperation drive the young into big stock bets 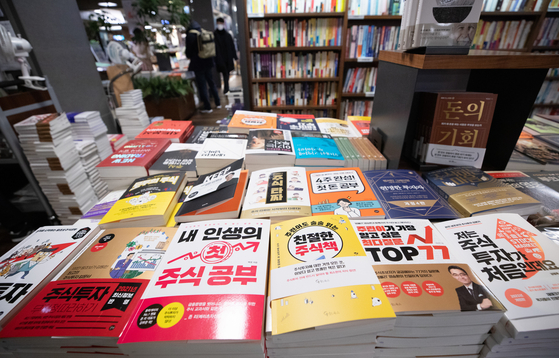 Books about stock investment are displayed at a bookstore in central Seoul. [NEWS1]

“Everything except my salary rose, including prices of properties and stocks,” Kim said. “I feel like working isn't worth much these days, so I focus more on stock investment rather than work.”

“I didn’t just invest in the stock market. I started studying investment in U.S. government bonds and gold as well.”

While prices of stocks and properties have been skyrocketing recently, salaries have stagnated due to the coronavirus pandemic.

According to KB Kookmin Bank, the house price-to-income ratio — average house price divided by average income— in Seoul was about 15.6 as of November last year. This means a middle-income household must save all their income for 15 years to buy a property.

But salaries for Koreans are rising slowly, and even declined recently due to the Covid-19 pandemic.

According to Statistics Korea, the monthly salary of a household with two or more family members averaged about 3.47 million won as of the third quarter of last year. That’s down 1.1 percent compared to the same period a year earlier.

The situation was most evident in the salary growth rate of people in their 20s and 30s.

More young Koreans are now jumping into stock investment considering it is the last chance to earn money and purchase property.

According to Kiwoom Securities, some 1.17 million Koreans in their 20s and 30s newly opened their stock trading accounts last year, a fivefold increase compared to the previous year. 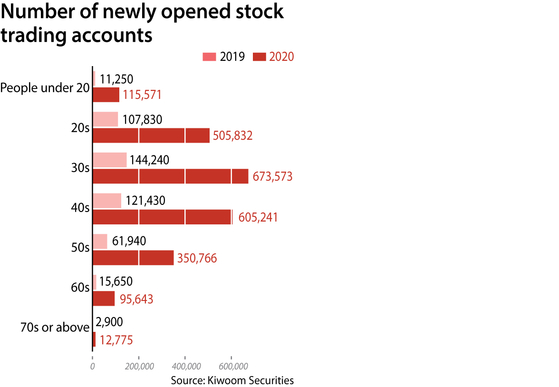 Sohn Kwan-ju, a 28-year-old office worker, puts some 70 percent to 80 percent of his salary into a stock trading account every month.

“I always feel anxious [about my future] as there is no longer such thing as a job for life, and the company doesn’t really increase my salary,” Sohn said. “For now, my goal is to earn 500,000 won every month through stock investment so that I can pay my rent with that.”

Another 30-year-old man who currently works for a foreign company says he gave up getting promoted at his work.

Instead, he has been concentrating on earning money through stock investment. Last year, he put about 20 million won into stocks and has constantly been investing 40 percent of his salary every month.

“The wealth gap between me and my friends has been widening quickly just because they purchased properties earlier than I did,” he said. “I can’t just wait to be promoted at work.”

According to a survey by Mirae Asset Investment and Pension Center on 700 Koreans aged between 25 to 39, some 31 percent said they have been investing in order to “save up money” to buy houses. Another 23 percent said they are saving "for life after retirement,” while roughly 15 percent said they invest to save money for their marriages.

The Financial Independence Retire Early movement is also booming for young people. It means to save and invest very aggressively — somewhere between 50 percent to 75 percent of income — so that people can retire sometime in their 30s or 40s.

The movement was once popular in the United States.

A 30-year-old hairstylist hopes to save up about 400 million won in 10 years and retire. He said he will then invest in dividend stocks, particularly those with high yields above 5 to 6 percent so that he can regularly earn some 2 million won per month from it.

Choi said he has constantly been investing in the stock market since 2017 — some 75 percent of his salary every month.

“I will work until 40 and then will make a living through investing in various companies with the money I have saved,” added Choi.

Koo Jeong-woo, a sociology professor at Sungkyunkwan University, said the current situation in which young people concentrate on investing in real estate and stocks rather than saving their salaries reflects the state of society.

“People who are suffering from fear of the future, as well as the social deprivation because they have lost the chance to buy properties, consider stock investment as the ‘last opportunity’ to earn money,” said Koo.

A growing number of young investors are even borrowing loans to participate in the investment.

The total amount of money Koreans who are aged under 30 borrowed from brokerage houses amounted to 420 billion won as of September last year. That’s roughly 162.5 percent up compared to the previous year.

“I borrowed some 34 million won in unsecured loans early this year, and invested exactly half of that into stocks,” Pyun, a 30-year-old office worker, said. “I hesitated at first, but decided to borrow money after realizing that all my friends have been investing in stocks with the loans.”

Sung Tae-yoon, who teaches economics at Yonsei University, is concerned.

“More people are going into debt in order to invest in stocks,” Sung said. “Young investors will likely be hit hardest when stock prices are adjusted in the near future.”