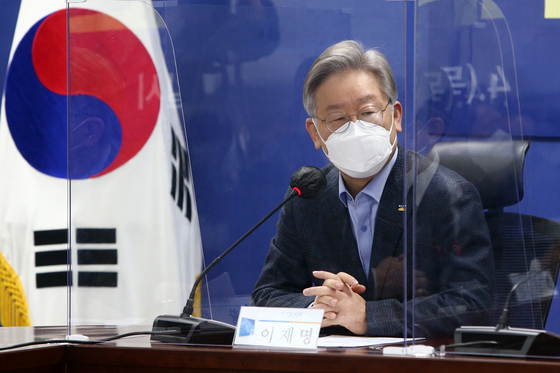 
Gyeonggi Gov. Lee Jae-myung on Sunday topped presidential polling for 2022, putting him in a double-digit lead over ruling and opposition party rivals for next year’s race to the Blue House.

The results of a Research and Research poll showed the outspoken governor and former presidential candidate with a comfortable 32.5 percent out of a wide field of potential contenders to succeed President Moon Jae-in.

Lee Jae-myung ranked No. 1 among all age cohorts except those aged above 60, as well as in all regions saved for Daegu and North Gyeongsang, based on the responses from 1,022 eligible voters nationwide from Feb. 26 to 28.

In the Honam region, which consists of Gwangju and North and South Jeolla, the DP’s traditional stronghold, Lee Jae-myung scored a whopping 47.8 percent — double the support given to Lee Nak-yon, once a popular governor of South Jeolla.

A survey from Realmeter released Monday, conducted from Jan. 25 to 29 with 2,529 respondents, also showed Lee Jae-myung with a strong lead, albeit with a narrower margin.

The popularity of the 56-year-old governor can be attributed to his straightforward response to the Covid-19 pandemic, most conspicuous in his stanch pursuit to hand out emergency relief to the public.

Defying leaders of his own party — as well as the central government — Lee last month announced cash payouts would be provided to all Gyeonggi residents to help cushion the blow of weeks-long social distancing restrictions on the local economy.

Exercising his executive prerogative, Lee said all approximately 14 million residents of the province would each receive 100,000 won ahead of the Lunar New Year holidays which start on Feb. 11.

The move was disparaged by the right as being populist, while figures like Prime Minister Chung Sye-kyun attacked the policy for being unwise, but it garnered the attention of voters who perceived the governor as taking a proactive stance amid the crisis.

Lee’s prospects as a presidential contender skyrocketed last year, too, after he won a drawn-out court case over allegations of electoral law violations in July. His acquittal by the Supreme Court cleared him of a lower court’s conviction that would have stripped him of office.

While his popularity with moderate and even some conservative voters has been attested in polls, the governor’s position within his own party remains far from secure.

Lee’s aggressive stance toward Moon in the primaries ahead of the 2017 presidential election stained his reputation among the president’s core supporters and left a lasting impression.

While winning over Moon’s followers may be critical to securing his party’s support, the president’s dwindling approval rating means Lee may have to juggle between proving his loyalties while simultaneously casting himself as different from the administration.