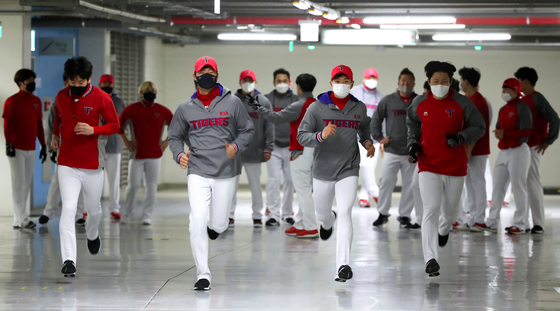 The Kia Tigers started their spring training avoiding the rain by warming up in the basement parking lot at Gwangju-Kia Champions Field in Gwangju. [YONHAP]


It was an unusual start to spring training on Monday, as KBO clubs accustomed to jetting off to warmer climes began their preparations for the 2021 season on a cold, rainy day in Korea.

The ongoing coronavirus pandemic forced all 10 teams to hold their training camps within Korea, with some clubs choosing to stay at their home stadiums and others moving to new training camps around the country.

The SK Wyverns were the only team to jet off anywhere, flying to Jeju Island to start their spring training in Seogwipo. The Wyverns, technically still owned by SK Telecom until the club's sale to Emart is confirmed later this month, set off on what the media have dubbed "the Wyverns' last camp" with former teammate Kim Kwang-hyun of the St. Louis Cardinals. 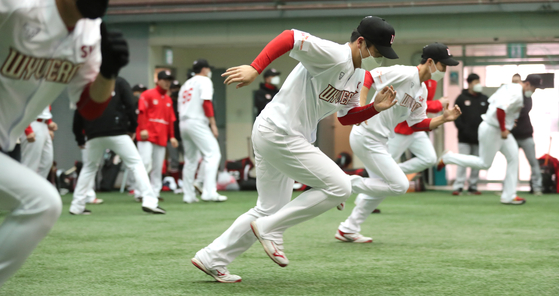 The Wyverns flew to Seogwipo on Jeju Island for their spring training. [YONHAP]


The Wyverns will be rebranded by new owner Emart next month, although the team's new name, colors and mascot have not been announced yet. Shinsegae Group, which owns Emart, trademarked the team name Electros on Monday, so the club could be called the "something Electros," although which brand they will choose to name it after is still unclear.

The Wyverns weren't the only club to be joined by a former player for spring training. The Kiwoom Heroes kicked off their training camp on Monday at the club's home stadium, Gocheok Sky Dome in Guro District, western Seoul.

Kim Ha-seong of the San Diego Padres joined the Heroes for spring training before he flies to the United States to join his new club. Kim played for the Heroes until the end of the 2020 season. Kim signed with the Padres on Dec. 31 last year. 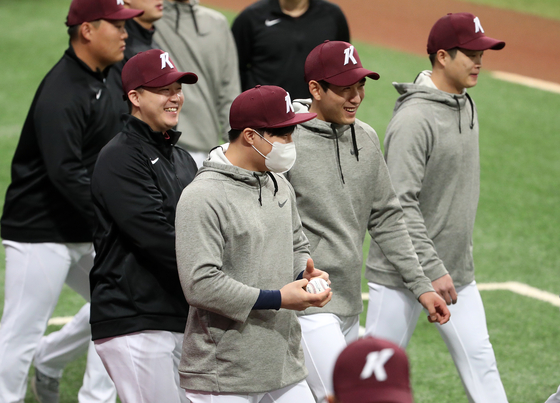 
The Kia Tigers started their spring training in the parking lot at Gwangju-Kia Champions Field, the club's stadium in Gwangju. With heavy rain falling in Gwangju, the Tigers were forced down into the underground parking lot where they ran laps to kick off training.

The 32-year-old has not yet been linked to any MLB clubs.

NC Dinos' slugger Na Sung-beom had also attempted a move to the majors during the offseason through the posting system, but failed to find a club and returned to the Dinos where he is still under contract. He was with the club as they started spring training at Masan Baseball Stadium, the club's former home ground, in Changwon, South Gyeongsang.

Like the Dinos and the Tigers, the Samsung Lions and the Lotte Giants both kicked off their spring training at home, in Daegu for the Lions and Busan for the Giants.

Both the Doosan Bears and LG Twins vacated their shared home stadium in Jamsil, southern Seoul, only to end up right next to each other all over again, this time in Icheon, Gyeonggi. Both clubs moved to their Futures League facilities in the city, although Doosan will head further south to play in Ulsan at the end of February.

Suwon club KT Wiz also chose Ulsan for their spring training. In a bid to head south for a little more warmth, the Wiz will split their time between Ulsan and Busan. The Hanwha Eagles opted for a similar approach, heading south from Daejeon to Geoje, South Gyeongsang, the furthest south you can get without leaving mainland Korea.