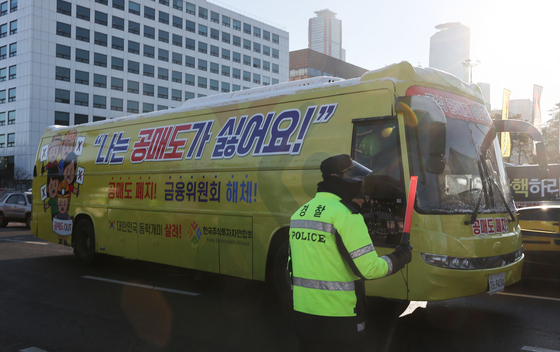 A bus decorated with signs supporting the short selling ban operated by the Korea Stockholders Alliance, a group of local retail investors, passes by the National Assembly building in Yeouido, western Seoul, on Thursday. [YONHAP]


After much debate involving the country’s financial regulators, lawmakers and retail investors, the Financial Services Commission (FSC) is extending restrictions on short selling until May 2 and allowing the short selling of 350 shares.

The solution is not sitting well with everyone, especially smaller investors. The claim remains that the practice favors larger investors and foreign investors.

While the FSC said it will be improving short selling in the country during the next month before the ban is partially lifted, it is trying to get ahead of the story by anticipating and answering objections and questions. Its FAQ was released in a joint statement with the Korea Exchange, the Korea Financial Investment Association as well as other relevant institutions.

Below is a summary of the announcement.

A. The selected stocks are mostly large caps representing the Korean stock market that investors are already familiar with. As their market capitalization is large, the short selling practice is less likely to shake stock prices.

Kospi 200 and Kosdaq 150 shares are selected based on accumulated market capitalization and daily traded amount and cover 11 industry categories, including IT, healthcare, materials, finance and energy. While the mix of shares in the two indices change every six months, securities allowed for short selling will be aligned with the change.

As of Feb. 1, stocks included in Kospi 200 account for 94 percent of the shorted Kospi stocks while the Kosdaq 150 account for 72.5 percent of shorted stocks on Kosdaq, data from Korea Exchange shows.
The blue chips are tightly linked with the derivatives market, so it will be more useful for investors to have short selling opportunities for these stocks.

The Stock Exchange of Hong Kong has been designating securities eligible for short selling since 2005.
It has been expanding the number of designated securities and changing standards for designation from time to time reflecting the stock market’s growth.

The partial lifting of the ban will minimize the shock on the market.

Regarding the selected list of stocks, a source from a local asset managemer said, “It is true that for investors attempting to achieve gains from short selling not having the option of more volatile smaller stocks could be an issue, but since investors play with various long and short strategies, they will come up and use what’s been allowed.”


Q. Will the ban definitely be lifted on May 3?

For the announced securities, the ban will definitely be lifted without any additional procedures or announcements. As for other stocks, it is yet undecided when the ban will be lifted. The FSC committee in charge of making short selling decisions will have to hold a separate meeting to decide on plans regarding other stocks.

The worry comes as short selling is basically betting on price falls of stocks.

Short selling is when an investor borrows stock and sells that stock immediately in hopes of buying it back at a lower price, repaying the loan and profiting from the difference.

The Korea Exchange said the validity of the argument, about the causal relationship between short selling and stock price falls, has not been verified by any research so far.

It also referred to a research from the Korea Capital Market Institute saying the stock price growth rate before and after short selling resumption, in countries where the practice had been banned due to impact from the coronavirus pandemic, was not so much different from countries that allowed short selling the whole time.

Of 12 countries that banned short selling due to Covid-19, Korea and Indonesia are maintaining the ban.
The exchange added that short covering actually limits price falls. Short covering is the process of buying back shares for investors to unwind their bets.

The buying may drive up stock prices.


Q. Retail investors say they are being preyed upon by institutional and foreign investors.

The Korea Exchange said it is wrong to think short sellers are always benefitting more from their investments, as short selling, like any other investment options, can incur losses as well, and actually massive losses in some cases.

According to the exchange, short selling can be risky as investors can lose money if stock prices soar. While a stock price cannot fall below zero, stock price can rise infinitely, at least in theory.

The stock market operator referred to the recent case involving GameStop in the United States where major hedge funds that went short lost big as the stock’s price soared.

Sentences of one or more years can be imposed on illegal short sellers from April 6 as the Financial Investment and Capital Markets Act has been revised.

While it might seem like the punishment is lighter than the United States, “one or more years” can be as long as 50 years under Korea’s legal system, the exchange said, adding it is not a light punishment compared to other countries.

In Japan and Germany, illegal short selling is only punished with fines and not imprisonment.


Q. Some say the Korean stock market offers a more favorable environment for short sellers than other countries as there is no specific due date to pay back shorted stocks in Korea.

Date of maturity of borrowed stocks is set by the related parties, and if the lender requests the borrower to pay back earlier, the borrower must pay back. This is riskier than having a set date to pay back stocks as borrowers may need to pay back at an unexpected date. Such a rule is internationally effective, according to the depository.

As retail investors have weaker credit compared to institutional investors, lending shares under the same contract could put them under huge risk, the depository said. To enable retail investors to remain short for a certain period of time, a specified payback deadline is given for them, within 60 days after borrowing.

Short selling is currently allowed in all developed markets, and banning it for a long time could drive institutions and foreign investors away from the local stock market as they use short selling as a way of hedging risk.

The FSC referred to recent comments by the International Monetary Fund.

Andreas Bauer said that while it is important to protect retail investors and have a leveled playing field, “an outright ban on short selling on those grounds is a very blunt instrument to address this concern” warning it could harm market efficiency.