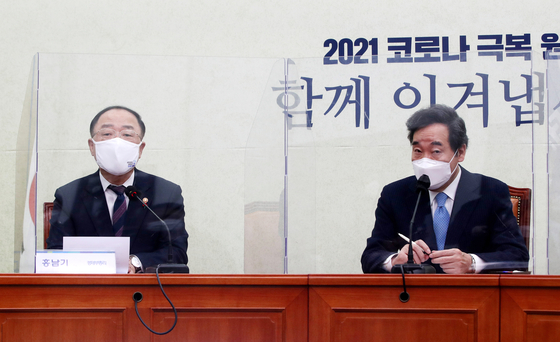 Less than a month after its third relief package, the ruling Democratic Party is pushing a fourth, playing with fiscal fire as the national balance sheet is already much strained and the economy not yet back on track.

To make matters worse, the fourth package will be a whopper, at 30 trillion won ($26.7 billion) to 40 trillion won, far bigger than any of the first three.

The Finance Ministry is again insisting that the plan is a bad idea, though given its track record, it is likely that it will simply cave at the last minute and go with whatever the ruling party proposes.

Bureaucrats are particularly miffed by the two-track plan being proposed, which will distribute money to small businesses suffering as a result of social distancing measures and cash more generally, as was done in the pennies from heaven first round of grants in May 2020.

The ball got rolling on the discussions of the fourth round shortly after the third was handed out.

It was raised by Democratic Party leader Lee Nak-yon at the National Assembly on Tuesday.

“We will prepare for a fourth emergency relief fund,” Lee said at the National Assembly. “We will negotiate with the government so that a targeted support and a support for all people will be done together through a supplementary budget.”

He said the targeted relief fund will be given to businesses and low-income households that have been heavily affected by the strict social distancing, while the goal of the relief grant for all will be to boost the domestic economy.

“We will determine the timing according to the Covid-19 situation,” Lee said.

Finance Minister Hong Nam-ki immediately responded, writing on Facebook that he will block it despite criticism.

“Even if additional emergency relief fund is necessary, it is difficult for the government to accept a simultaneous selective support and support for all,” Hong said, noting that the third relief grant is currently in progress and it will be continued until March.

The Finance Minister said in making a policy decision, the most two important factors are necessity and rationality.

“In all policy decisions, it comes with a cost and there is a limit,” Hong said.

The Finance Minister noted that he is open to a discussion on a supplementary budget, but set the date to around March, while the ruling party leader urged the finance minister not to set up a barricade even before discussions started.

Lee’s pressure on the finance minister grew further the following day.  The ruling party leader stressed that the owner of the government’s funding is the people.

“With the Covid-19 and the quarantine measures prolonging, it is weighing down on the people’s lives and many have already reached their limits,” Lee added. “We need to look at the reality straight in the face, and the government and the ruling party needs to be humble when faced with the suffering that people are going through.”

He added that it was time to further expand fiscal spending.

“That fiscal spending in holding up the lives of the people is something that should be obvious,” Lee said.

Some of the lawmakers from the Democratic Party have urged the finance minister to quit.

Lee Hae-chan, then Democratic Party leader, strongly criticized Hong for opposing to the emergency relief grant for all.

In November, Hong offered to resign in protest of a plan to ease taxation on stock investments. The resignation was quickly rejected by President Moon, who said the finance minister has his confidence.

In every dispute that Hong has had with the Democratic Party, the finance minister in the end complied. But this time, the level of insubordination was stronger.

In a Facebook posting, Hong quoted a phrase from the Analects of Confucius which said that a person should know when to stop. This was interpreted as Hong's willingness to frustrate the relief grant even putting his job at risk.

When facing reporters the following day, Hong said the expression he used in his Facebook post was restrained.

The ruling party is reportedly sizing up the relief grant to be around 30 to 40 trillion won, which is the biggest among the relief grants that have been created so far.

The first emergency relief grant, which was given to every Korean household in May 2020, was between 400,000 won and maximum 1 million won. Of the 14.3 trillion won, 12 trillion won was funded by the central government.

The biggest question is how the next grant will be covered.

The government either has to redirect the use of already approved budget or has to increase debt in funding the minimum 30 trillion-won emergency relief package.

Of the 12 trillion won that the central government financed in the first emergency relief package, nearly 30 percent, or 3.4 trillion won, was funded through issuing government bonds.

In the third, the government used its contingency budget, which is reserved for national crises such as natural disasters, while repurposing government funds, such as the National Sports Promotional Fund.

National debt skyrocketed last year. It is estimated at 846.9 trillion won, a 17 percent increase year-on-year. That’s faster growth than in the previous years under the current government.

The government for years has tried to keep the national debt-to-GDP ratio below 40 percent, which was considered the most appropriate level for the Korean economy to maintain a sound fiscal spending.

Global institutions such as the International Monetary Fund (IMF) advised the Korean government to be more aggressive in its fiscal spending amid the unprecedented crisis.

“Given sizable economic slack and downward risks to the recovery, some additional fiscal and monetary policy accommodation would help the economy normalize faster and bring discouraged workers back to the labor market,” said Andreas Bauer, IMF mission chief on Korea and assistant director to the Asia and Pacific Department, via a video conference late January.

According to IMF estimate, Korea’s fiscal stimulus including tax cuts in combating Covid-19 was among the smallest on a list of 20 advanced countries.

Korea’s fiscal stimulus accounted for 3.5 percent of the nation’s GDP. It’s only slightly higher than Finland’s 2.6 percent and at Spain’s 3.5 percent.

The fiscal stimuli of other major economies exceeded 10 percent of their GDP, including the U.S. at 11.8 percent and Japan at 11.3 percent.

Some market experts cautioned against reckless spending, as Korea faces major problems, including changing demographics and other social issues, such as the government’s fiscal pressure in the future due to significant increase in the number of public servants.

Some have criticized the emergency relief grants, which should be managed with greater responsibility, in shoring up populism.

A survey conducted by Gallup Korea indicated the public strongly supported selective relief grants targeting businesses or people in need instead of distributing them to everyone.

In a report released in January, Yonsei University economics professor Yang Joon-mo strongly criticized the emergency relief grant as a tool used ahead of the April general election in 2020.

“Covid-19 discussions on fiscal soundness and effective spending have disappeared,” Yang wrote in the report. “Spending whose effect hasn’t been verified, such as emergency relief funds for political purposes, have increased, seriously damaging fiscal soundness.”

The professor argued that the Moon government has failed to properly understand the side effects of fiscal spending, leading to reckless spending.

Professor Yoon noted that despite government spending increasing, its effect has dropped significantly.

“The role of the government fiscal policy has become large as the Korean economy experienced an unprecedented Covid-19 economic crisis,” Ryu said in a report published in late January. “While our fiscal soundness is evaluated relatively favorable, we’re at a point where there is a need to review the risks long term due to increasing fiscal spending and welfare spending as our society is heading towards a super-aged society.”