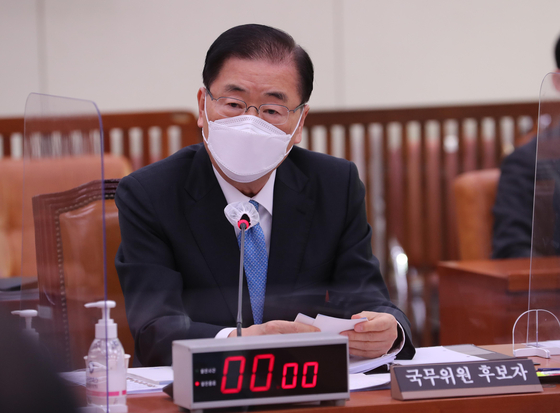 Chung Eui-yong, the South Korean foreign minister nominee, said that he believes North Korea is willing to denuclearize in his parliamentary confirmation hearing Friday, while the Pentagon says it has assessed otherwise.

In his hearing at the National Assembly, Chung, a former director of the Blue House National Security Office, said that “peace on the Korean Peninsula has become commonplace” under the Moon Jae-in government, stressing that there have been “no provocations by North Korea.”

Chung also indicated that the United States and South Korea should scale down their annual springtime joint military exercises, taking into account inter-Korean ties and the Covid-19 pandemic.

But a U.S. Department of Defense spokesperson warned that the Pentagon is well aware of North Korea’s desire to develop its military force in response to Chung’s remarks downplaying North Korea’s threats.

Lt. Col. Martin Meiners, in a written response to the JoongAng Ilbo Saturday, reiterated a recent remark made by the Pentagon press secretary saying that Washington is “mindful of Pyongyang's desire to advance their military capabilities."

Meiners had been asked by the newspaper to comment on Chung’s remarks coming after North Korean leader Kim Jong-un pledged to bolster the nuclear arsenal of his country and flaunted a new nuclear-powered submarine-launched ballistic missile (SLBM) in a military parade last month.

Pentagon press secretary John Kirby in a press briefing on Jan. 28 said, “I'm not going to get into assessments of specific weapon systems now, but all I'll just say is that we're certainly mindful of Pyongyang's desire to advance their military capabilities. We know exactly what those military capabilities are designed to do.”

He added, “We're going to continue to make sure that we have the readiness posture we need on the Korean Peninsula.”

On whether the Pentagon is considering scaling down joint military exercises between Seoul and Washington, Meiners replied, “Military readiness is a top priority of the secretary of defense.”

New U.S. Secretary of Defense Lloyd Austin had his first phone call with South Korean Defense Minister Suh Wook on Jan. 24, and the two sides noted the need to maintain the readiness of combined forces.

Meiners added, “Our combined military training events are a principal method of ensuring our combined alliance readiness. These training events are non-provocative, defensive in nature and are intended to maintain alliance readiness to ensure we are ready to ‘fight tonight.’ Any decision on the scope, scale and timing of exercises will be made bilaterally with these factors in mind.”

The U.S. State Department has indicated that it is conducting a comprehensive review of its approach to Pyongyang, which could include more pressure, as well as diplomatic and humanitarian overtures.

The Moon administration has pushed its Korean Peninsula peace process initiative and has been expressing hopes that the new Joe Biden administration builds on the denuclearization negotiations that began in the Donald Trump government.

North Korea had put a moratorium on its nuclear and long-range missile testing, while Seoul and Washington postponed or scaled down their large-scale joint exercises during this period of diplomacy which began in 2018 but has been at an impasse since the Hanoi summit collapsed in February 2019.

Chung, who had been a key mediator in the early stages of the negotiations process between Pyongyang and Washington, which led to two leaders’ summits and a third impromptu meeting, said that the most realistic approach to denuclearization is “a step-by-step” process entailing interim agreements along the path toward the end goal.

He said he would consult with the United States on such plans and make diplomatic efforts toward an early resumption of talks between Washington and Pyongyang to move along such denuclearization dialogue.

But a U.S. State Department spokesperson also revealed skepticism over Chung’s remarks on North Korea’s willingness to denuclearize in a statement to Radio Free Asia Friday.

The Biden administration, the spokesperson added, “will assess the threat North Korea poses and adopt an approach that works in close coordination with allies and partners.”

Biden has also ordered a global posture review to “best allocate military forces in pursuit of our national interests,” Pentagon press secretary Kirby said Friday. The Trump administration has often threatened the withdrawal of U.S. troops from allied countries as a negotiation card.

The Pentagon said, “Commitments — like the rotational forces in Poland and Korea — will be considered and those deployments will continue even as the review goes on.”

Pyongyang has reacted sensitively to joint military exercises between Seoul and Washington, which oftentimes was a period of escalated tensions on the Korean Peninsula.

The Choson Sinbo, a pro-Pyongyang propaganda newspaper run by the General Association of Korean Residents in Japan, or Chongryon, in a report Sunday called on the Moon and Biden administrations to halt joint drills, saying that they are aimed at Pyongyang and betray the inter-Korean declaration of 2018.

It reported that a statement released by the association said that the United States did not keep the promises of the North-U.S. Singapore statement of 2018 and was wary of the Biden administration adopting a “new strategy” on the North.