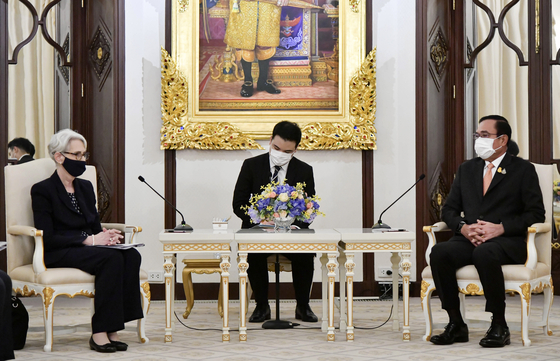 Sherman told a reporter in a telephone conference with reporters during a visit to Thailand that Biden recently named career diplomat Sung Kim as the new U.S. special representative envoy for North Korea “for talks, should they get underway.”

She continued, “And this was another signal that we are ready and prepared to have dialogue with the DPRK, and we hope that they will take us up on that possibility,” referring to the acronym for the North's official name, the Democratic People's Republic of Korea.

Biden in a joint press conference with South Korean President Moon Jae-in on May 21 in Washington announced Kim, U.S. ambassador to Indonesia and acting assistant secretary of state for East Asian and Pacific affairs, as his first special envoy for North Korea.

Kim previously served as the U.S. ambassador to Seoul and also played a role in arranging the first summit between North Korean leader Kim Jong-un and former U.S. President Donald Trump in June 2018 in Singapore. He also served as a special envoy for the now-defunct six party talks under the George W. Bush administration.

Sherman confirmed that Kim “will be returning to Indonesia full time,” while carrying out his role as the North Korea special envoy. The North Korea envoy position was previously held by Stephen Biegun, who later doubled as the U.S. deputy secretary of state under the Trump administration.

Sherman was sworn in as the first female U.S. deputy secretary of state on April 14 and is currently in the middle of her first overseas trip in her new post, visiting Brussels, Ankara, Istanbul, Jakarta, Phnom Penh and Honolulu.

She previously served as under secretary of state for political affairs in the Barack Obama administration and was involved in the 2015 Iran nuclear deal, or the Joint Comprehensive Plan of Action. She has also served as a special adviser to President Bill Clinton and a policy coordinator on North Korea.

The Biden administration at the end of April announced it had completed its North Korea policy review and is prepared to engage in diplomacy with Pyongyang while opting for a “calibrated, practical approach,” finding a middle ground between a “grand bargain” sought under the Donald Trump administration and the so-called strategic patience of the Obama government.

Sherman said that the United States has “made our policy known to the DPRK,” without elaborating further.

The White House previously said it tried to make diplomatic contact with North Korea since mid-February but that Pyongyang had been unresponsive. Denuclearization negotiations have been at a standstill since 2019 after the second North-U.S. summit in Hanoi.

In its first response to the Moon-Biden summit, North Korean state media on Monday criticized the United States for lifting missile restrictions on South Korea, warning it could raise tensions on the Korean Peninsula and trigger an arms race.

The report in its official Korean Central News Agency described the newly unveiled U.S. policy on North Korea as “trickery.”

Chung asked Aquilino to continue to contribute toward strengthening the South Korea-U.S. alliance and “establishing peace and stability on the Korean Peninsula” as head of the U.S. Indo-Pacific Command which commands the U.S. Forces Korea.

Aquilino arrived in Seoul from Tokyo Wednesday for a two-day visit as part of his first overseas trip since he assumed his post on April 30. 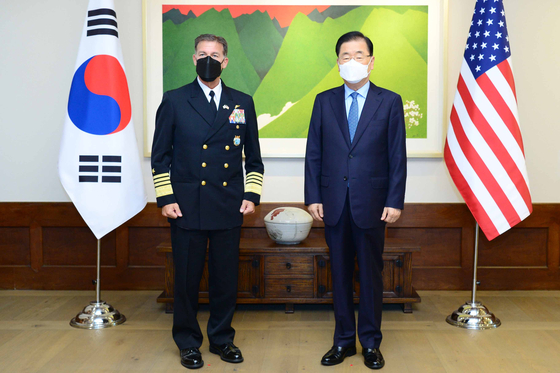