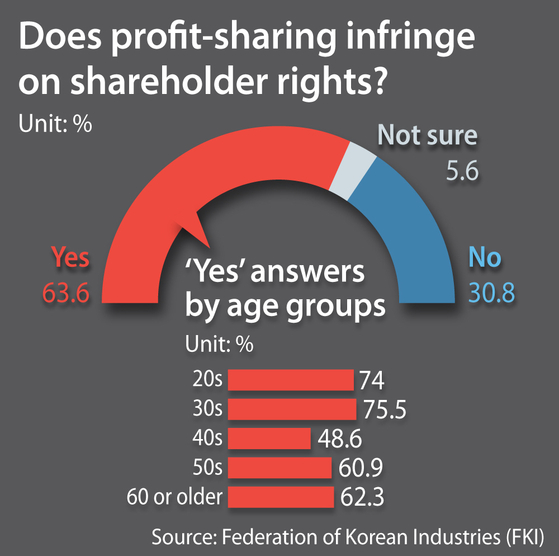 The Federation of Korean Industries (FKI) commissioned Mono Research to survey 500 shareholders aged 18 years old or above and released the results on Sunday based on data collected from Jan. 28 to 29.

According to the data, 51.6 percent of the respondents said they opposed the implementation of the profit-sharing scheme, and 42.6 percent said they supported the idea. Eighty percent of respondents in their 30s objected, the highest portion among all age groups.

The ruling party believes financial and IT companies have benefited disproportionately from the pandemic and should be compelled to part with some of their profits for distribution to those that suffered during the crisis.

The DP identified e-commerce companies and food delivery app companies as subjects of the profit-sharing policy. The financial holding companies became targets for politicians as they look set to report historically high profits.

Of those surveyed, 26.4 percent cited loss in corporate profits and competitive edge as the reason for their pushback. Other concerns included infringement on shareholder rights, with 23.6 percent mentioning this as their objection, lack of correlation between corporations and victim groups of the pandemic, discrimination against local companies compared to foreign ones and the difficulty of calculating profits purely from the coronavirus pandemic.

Those agreeing with the profit-sharing concept said the policy could contribute to restoring equity in the economy and help distribute the pain of the pandemic.

More than six out of 10 respondents said the reduction in corporate profit could result in the decline in stock prices and size of the dividends. Younger people in their teens, 20s and 30s voiced concerns about the infringement of property rights.

Almost half of the respondents, or 47.2 percent, said they are willing to participate in class action suits if the profit-sharing scheme results in the fall of stock prices and a reduction in dividends.