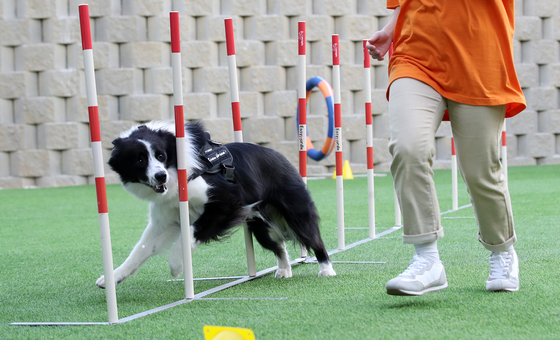 Dogs play freely at Anian Park in Ulsan. The opening of the center in September was part of the city's attempt to make itself pet-friendly for locals and visitors. [NEWS1]


As part of Park Da-in's weekend routine, the 39-year-old and her dog Gosuni frequent a center in Ulsan where they live.

But the interesting thing about this particular center is that it's designed for Gosuni's needs, not Da-in's.

Anian Park, which opened last year, is located in Ulsan’s Buk District and has a large playground where pets can run around, as well as facilities like water faucets for pets and containers to pick up waste. The humans haven't been forgotten as there is also a rest area and a cafe, as well as a store where food and other necessary items to keep their pets safe and healthy can be purchased.

“I was so delighted to have a place where my pet Gosuni can get off the leash and run around,” said Park.

However, she pointed out that she is not so satisfied with the entrance fee for the state-run facility. Owners and pets are each charged a 6,000-won ($5.40) fee. 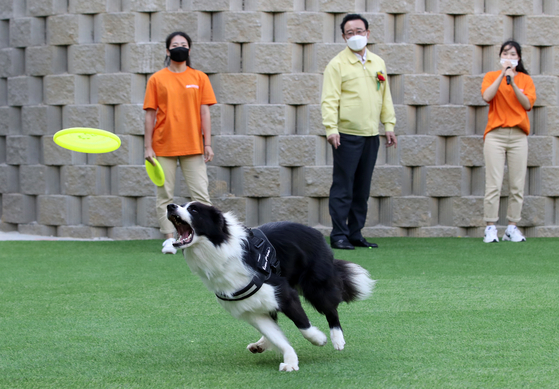 A dog plays at Anian Park in Ulsan. [NEWS1]


Ulsan city government opened Anian Park in September last year, spending some 11.1 billion won, as part of its goal to turn the city into a pet-friendly zone. The government also has plans to install designated containers for disposal of pet waste at major tourism destinations across the city, as well as designate a pet zone with facilities that cater to owners who have traveled to Ulsan with their furry friends.

Ulsan followed in the footsteps of Uiseong County in North Gyeongsang, which opened a pet center called Pet World in June last year. With an 11.9-billion-won budget, the center features a pet-only pool, indoor and outdoor playgrounds and a camping site.

Gangwon’s Pyeongsang County is also in the process of making a pet-centered tourism theme park that has a medical center for pets as well as pet hotels, while Chuncheon is close to the opening of its pet playground. Daejeon is also in the middle of construction to make a pet-friendly park with a budget of some 21.8 billion won which is set to be competed sometime next year.

Regional governments in Korea are opening up such centers taking into account the growing number of households that have pets. In addition to the facilities, the city governments are also introducing pet-related educational services to help owners better train their animals.

According to the research by the Ministry of Agriculture, Food and Rural Affairs, the number of households that have a pet increased from 17.4 percent in 2010 to 26.4 percent in 2019.

City governments of Seoul, Gwangju, Ulsan and Incheon, as well as the provincial government of Gyeonggi among others, have also responded to the coronavirus pandemic by opening temporary care centers for pets whose owners have been infected by Covid-19 and need to be isolated. Eastern Seoul’s Gangdong District offers owners in isolation pet food and treats as well as pads if they are unable to take their pets outdoors.

In Seocho District of southern Seoul, it's not just owners in isolation who are offered care options for their pets. Residents can leave their animals at a center if they are heading off to vacation for 5,000 won per day. The district also offers a service where children can interact with animals before deciding whether or not having a pet is right for them.

Accordingly, more regional offices are setting up policies to help feed stray animals or find them new homes. They also neuter or spay stray animals to prevent them from reproducing. Jeonju, for the first time among all the regional offices, established a rehabilitation center for abandoned animals. Any animal that has not been claimed after 10 days is sent to a rescue center where they are trained so they can get used to human interaction and prepare to be adopted.

For those who adopt animals from the center, the city provides incentives of up to 100,000 won that cover necessities, such as shots and vet fees as well as educating the new owners on correct practices. The city of Jeonju, which set up a team dedicated to work on animal welfare in 2019, has also been adding more areas where stray cats can access food and has been actively neutering or spaying cats that frequent these areas in a bid to control the number of strays. Such procedures numbered 38,059 in 2017 and increased to 64,989 in 2019.

In response to the rise in pet owners, many activists have been urging regional governments to also focus on crimes against animals. In December 2017, a law was passed that gave a person tasked with caring for animals the same rights as the police if they suspect crimes against animals are taking place. Currently, a team of special agents tasked with animal safety only exists in Gyeonggi, but animal protection is not its only job.

There are also calls for checks on policies related to animal welfare to ensure that they are working well. Across the country, about 130 people were hired by government offices last year to focus on animal welfare, or about one person per office. Animal welfare centers run directly by a city or a county are still scarce, with just 39 centers across the country as of 2019, including one in Seoul and four in Gyeonggi.