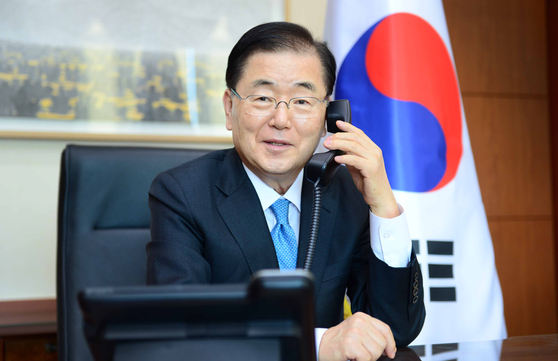 State Department spokesman Ned Price said in a press briefing Friday, “I hope you don’t confuse a lack of direct engagement with North Korea as an indication that the challenge of North Korea’s nuclear weapons and ballistic missile programs [...is] not a priority. It [...] very much is.”

Price added, “The North Koreans have continued to make progress on those programs in recent years, which makes this an urgent priority for the United States and one that we are committed to addressing together with our allies and partners.”

Price was answering a reporter’s question suggesting North Korea was not a top priority in U.S. President Joe Biden’s foreign policy, and asking whether there was any contact with Pyongyang behind the scenes.

The lack of direct engagement with North Korea at the moment is deliberate, noted Price, and serves the function of “making sure that we have done the diplomatic legwork,” such as keeping in “close contact” with treaty allies in the Indo-Pacific and partners in the region, “including those who may come under threat from North Korea’s ballistic missile programs.”

The Biden administration has launched a comprehensive review of North Korea policy and promised a “new approach” after denuclearization negotiations reached an impasse in 2019.

Price elaborated on the U.S. approach. “When it comes to our strategic goals, we’ll focus on reducing the threat to the United States and to our allies as well as to improving the lives of the North and South Korean people," he said. "And again, the central premise is that we remain committed to denuclearization of North Korea.”

He noted that the United States “remains the most powerful and strongest country in the world, but across every challenge we seek to bring along our allies and partners as force multipliers.”

In the context of North Korea, he said that “a coordinated diplomatic approach” to sanctions enforcement and messaging enables Washington to “address this challenge from a position of strength, and that’s precisely what we’re seeking to do.”

Price added, “I wouldn’t want to put a timeline on when you might see the next step in this process, but please know that that coordination is ongoing. It is very active.”

The two envoys stressed that they will “work closely together to pursue complete denuclearization of the Korean Peninsula,” according to Seoul’s Ministry of Foreign Affairs in a statement.

They also agreed on the importance of cooperation between Seoul, Washington and Tokyo, said the ministry, and addressed concerns about the situation in Myanmar.

In his first press conference after becoming foreign minister, Chung stressed that the Korean Peninsula peace process, a focus of the Moon Jae-in administration, is a “key task that cannot be delayed any further.”

In a statement after the call, the State Department said that Blinken congratulated Chung on his new job and “pledged full partnership to enhance the strength of the U.S.-ROK Alliance, which is the linchpin of peace, security and prosperity for Northeast Asia, a free and open Indo-Pacific region, and across the world,” referring to the Republic of Korea by its acronym.

Blinken highlighted the importance of trilateral cooperation with Japan, underscored the need for denuclearization of the Korean Peninsula and stressed Biden’s “commitment to strengthening U.S. alliances and partnerships,” added the statement.

In a press briefing last Tuesday, Price addressed the issue of South Korea and Japan appearing not to be on the same page when it comes to North Korea. He said it is important that “our partners and our allies also know what our strategic objectives are,” and that the “underlying goal there is to harmonize them, to make sure our approach is coordinated and, in turn, the most effective.”

Relations between Seoul and Tokyo, according to a recent Congressional Research Service report, are at their lowest in decades. The two neighbors continue to clash over sensitive historical issues and a trade spat, which gets in the way of Washington’s vision of trilateral cooperation.

The two sides exchanged views on ways for Seoul and Washington “to work together to make progress in achieving complete denuclearization and establishing permanent peace on the Korean Peninsula,” said the Foreign Ministry, and agreed to continue “intensive consultations” including in the process of Washington’s review of its policy toward North Korea.