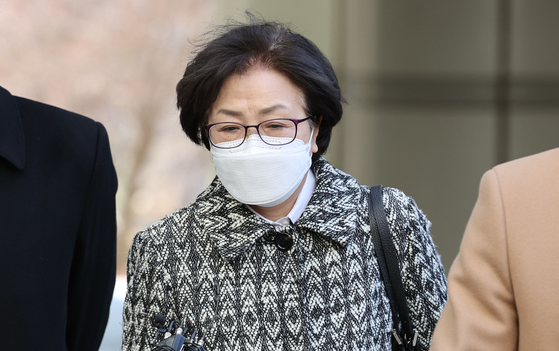 Former Environment Minister Kim Eun-kyung enters the Seoul Central District Court on Tuesday to attend a sentencing hearing. The court convicted her of abuse of power and sent her to jail for two years and six months. [YONHAP]


A former environment minister and former Blue House aide were convicted Tuesday of abuse of power for purging state-run company executives and replacing them with loyalists of President Moon Jae-in. 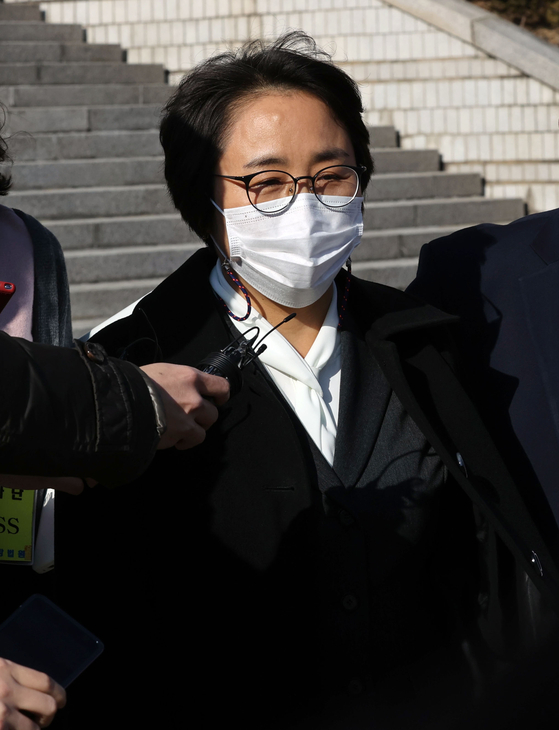 Shin Mi-sook, former presidential secretary for balanced personnel affairs, leaves the Seoul Central District Court after the sentencing hearing of her trial. She was convicted of abuse of power and received a suspended jail term. [YONHAP]


The court ordered Kim to be jailed immediately so she couldn't destroy evidence. "She has been denying all charges and she also lied about undeniable facts," the court said.

It was the first time a member of the Moon administration was jailed for abuse of power.

The Blue House said Tuesday that it had no immediate comment on the convictions.

In December 2018, the main opposition Liberty Korea Party, the predecessor of today's People Power Party, raised the allegation that the Environment Ministry created a blacklist of 24 public servants based on their political inclinations, and used it to oust some. It claimed the Blue House was behind the purge and members of Moon's presidential election campaign were appointed to the posts.

Following the revelation, the ministry admitted it created the controversial list in January 2018. It insisted the personnel files were never used for a personnel shuffle. The list contained 24 names, and 13 individuals had years left in their tenures.

The prosecution investigated and indicted Kim and Shin in April 2019 on charges of having operated the blacklist and forcing the executives on it to step down to create vacancies for Moon's associates. The list was mainly of executives appointed by the administration of ousted President Park Geun-hye.

From December 2017 to January 2018, Kim pressured 15 executives of corporations and institutions affiliated with the ministry such as the Korea Environment Corporation to step down, the court said in its ruling. Among them, 13 resigned due to the pressure.

The court said Kim blamed civil servants in her ministry for the political purge. "She said the Blue House and the Environment Ministry had not been involved in the selection of the successors to fill the vacancies," the court said. "She threw the entire blame on civil servants who assisted her."

Throughout the trial, Kim argued that political purges and a spoils system were customary practices in previous administrations, and the court criticized that argument.

"Even so, it is an illegal act that must be ended," the court said. "It cannot justify her action and it cannot be a reason to show leniency to her."