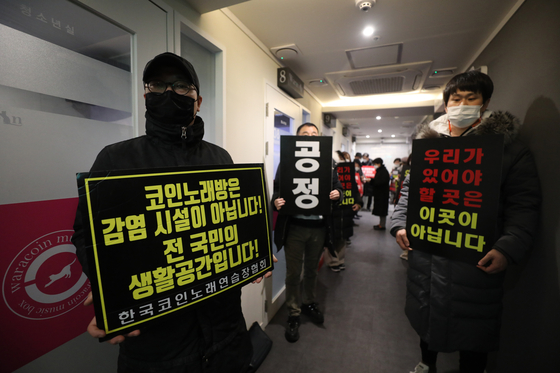 Coin noraebang owners demonstrates against the government business hours restriction at a coin noraebang in Seodaemnu, Seoul on Tuesday. [NEWS1]


Small businesses are fuming about the one-size-fits all regulations that require all establishments to close at 9 p.m., and they are organizing so their voices are heard.

The Nationwide Self-employed Emergency Measure Committee, which was formed by 12 groups, criticized Prime Minister Chung Sye-gyun, who again asked for the sacrifice of self-owned businesses to comply with the social distancing regulations for the greater good.

Members of the self-employed business union as well as another seven organizations, including a group representing gyms whose businesses have been crippled by social distancing regulations, have been holding silent demonstrations for the past three days.

While the businesses did not accept customers after 9 p.m., they have kept lights on until midnight, demanding the government ease the business-hour restrictions.

During the first demonstration, which started Monday, the self-employed union representatives gathered at a PC room in Gangseo. On the following day, they met at a coin noraebang in Seodaemun, and on the third day at a bar in Seocho.

The self-employed businesses demanded that the government scrap the limit on business hours that is unilaterally applied regardless of business characteristics.

They argued that different rules should apply to different businesses.

The business owners have also asked for legislation that would help compensate small businesses for their losses and the establishment of a group that would adjust the quarantine regulations.

The self-employed argued that self-employed business owners have cooperated with the government for a year since the coronavirus outbreak started.

They argued that it is an issue of survival and that they will no longer follow quarantine measures that only ask for more sacrifice.

Prime Minister Chung on Tuesday during a government meeting said he understands the disappointment that self-owned business owners feel in regards to the government decision to keep the business hours limited to 9 p.m. even during the Lunar New Year holidays.

“However, the decision considered all angles from the danger of infection and social acceptance,” Chung said. “As it is a decision that was made by listening to opinion of different groups, we ask [self-employed businesses] to participate and cooperate for the greater good.”

The government on Monday said it was easing the business hours for restaurants and cafes from 9 p.m. to 10 p.m., but only for those located outside the greater Seoul area.

Prime Minister Chung said the government will decide whether to ease the business hours for the greater Seoul area after the Lunar New year.