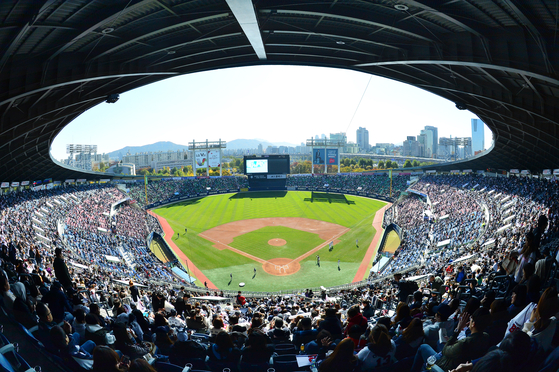 The NC Dinos take on the Doosan Bears at a sold-out Jamsil Baseball Stadium during the 2016 Korean Series. [NEWS1]


This year's KBO exhibition games kick off on March 20, with all ten teams playing ten games in ten days.

On Tuesday, the KBO announced the schedule for this year’s KBO League exhibition games. A total of 50 games will be held, with all games between March 20 and March 30.

These will be the first exhibition games to be played in Korea since 2019, having been canceled last year for the first time in history due to Covid-19 concerns.


All games will start at 1 p.m. without extra innings. Canceled games will not be rescheduled.

Incheon SK Happy Dream Park, Gwangju Kia Champions Field and Gocheok Sky Dome were excluded from the list as they are closed for remodeling. Both the Incheon and Gwangju stadiums will be used for later games, while Gocheok will stay closed for the entire period.

All eyes are likely to be on the game in Changwon, where the Wyverns will travel to face the NC Dinos. That fixture will be the first time the Wyverns appear in their new uniforms under their as-yet-unannounced new name following the club's sale to Shinsegae Group's Emart.

The opening day of exhibition games will also see the Doosan Bears take on the KT Wiz at Jamsil, the LG Twins face the Hanwha Eagles in Daejeon, the Kia Tigers visit the Samsung Lions in Daegu and the Kiwoom Heroes take on the Lotte Giants in Busan.

Exhibition games were canceled last year for the first time in KBO history after Covid-19 cases spiked in Korea in early March. Practice games were prohibited, leaving them to play intrasquad games at their own stadiums.

Although coronavirus cases are still high, the KBO and the teams have prepared certain preventive measures this year, after successfully completing the 144-game regular season and postseason last year.