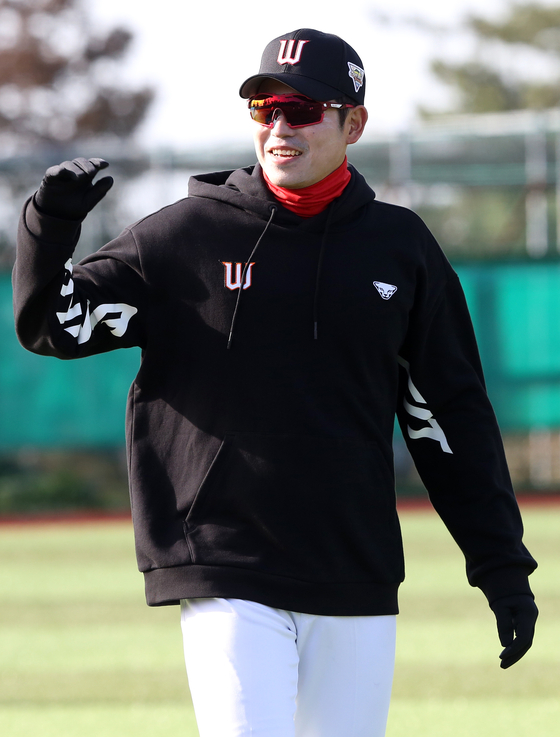 
SK Wyverns pitcher Lee Tae-yang hopes to turn things around this year after a difficult 2020 that saw him traded by the Hanhwa Eagles in the middle of the season.

Lee, who joined the Hanwha Eagles in 2010, was traded to the SK Wyverns for outfielder Ro Soo-kwang in June last year. After a decade with the Eagles, the move came as a surprise for Lee, who cried when he heard he would be heading to Incheon.

"In fact, I was mentally shaken after the transfer," said Lee. "But I'm okay now. Ryu Hyun-jin [of the Toronto Blue Jays] gave me a lot of good advice. I didn't do well in the first half last year, but showed improvement afterward. I'll try to maintain that."

Ryu trains with his former teammates from Hanwha every off-season when he returns to Korea, and this year Lee, who played with Ryu for three years before he went to the LA Dodgers, joined the training.

"Hyun-jin told me to think that I was traded because SK needed me," said Lee. "I gained confidence [after hearing that]."

Lee, currently at spring training with the Wyverns at Kang Chang-hak Baseball Stadium in Seogwipo, Jeju, thinks that he is now in the right place mentally.

"Now I am closer to my colleagues. I was both excited and worried because this is my first [training] camp at SK."

Unlike Hanhwa's Daejeon Hanbat Baseball Stadium, SK's Munhak Baseball Stadium favors batters. Lee, who throws more fly balls than ground balls, was concerned that his numbers might drop as sluggers took advantage of his pitchers at his new ballpark.

As a solution, Lee chose a Ryu-style cut fast ball, also known as a cutter. Ryu, who did not throw a cutter in Korea, learned from coach Rick Honeycutt when he was with the Dodgers, and it is now one of his strongest pitches.

"In fact, the burden of home runs is not small," said Lee. "Last year I didn't allow as many home runs as I thought.

"While my main weapon is a forkball, I learned the cutter from Hyun-jin to improve my efficiency against left-handed batters," said Lee. "In fact, this isn't the first time he's given me that advice, but I didn't fully grasp the idea. Hyun-jin can do it right away, but it's not as easy for me.

"The pitcher should not be stagnant, but must adapt. I'm not perfect yet, but I'm trying to get the feeling."

For Lee, Incheon is a place with good memories. He was selected for the national baseball team at the 2014 Asian Games in Incheon and pitched five scoreless innings, contributing to the gold medal win.

"[Before my transfer,] my wife used to joke that Incheon would be a good [choice] if I had to move to another team," said Lee. "I think it was meant to be. I will show a better performance this year than last year."