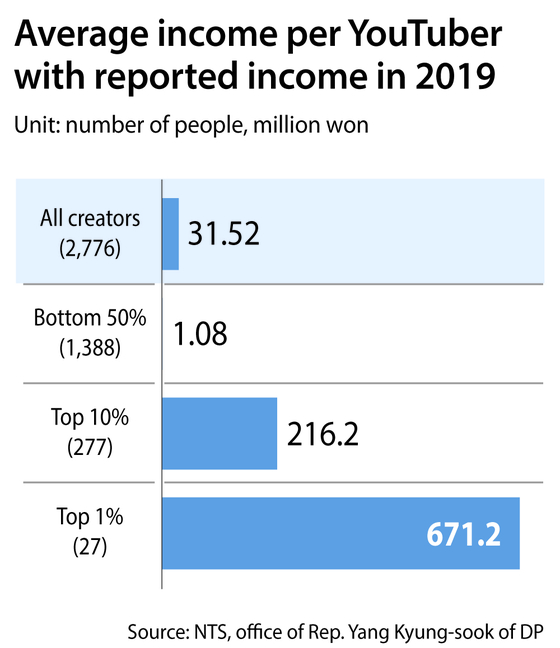 According to data from the National Tax Service submitted to Rep. Yang Kyung-sook of the Democratic Party (DP) and a member of the Strategy and Finance Committee on Sunday, the total reported income by the creators for 2019 was 87.5 billion won. The total income is calculated before subtracting expenses, similar to sales value of companies.

The NTS in September 2019 newly created categories for those engaged in the content creation business and one-person content creators in order to accurately survey the income collected by YouTubers and other streamers who profit from their videos. Before the industry codes were created, YouTubers were considered as self-employed business owners, and hence their income was not always accurately reported.

In the period between when the codes were newly created in 2019 and the first income report last May, the top 1 percent of YouTube creators, or 27 people, earned a total of 18.1 billion won. On average, one creator earned 671 million won.

Considering that there are approximately 3,400 channels run by Koreans with more than 100,000 subscribers as of last January, there is a significant portion who did not report their income.

“Even after the new codes were created, there may be YouTubers who use the code for self-employed as they have previously done, so it is likely there are more than 2,776 YouTubers who need to report their income,” said a spokesperson for NTS.

Yang said the taxations system still has limitations when surveying the income of the content creators.

“Even though the tax codes have been newly created, it is still difficult to audit the income of YouTubers under the current system,” Yang said. “NTS needs to ensure that the content creators strictly self-report their income to prevent income tax evasion through monitoring.”