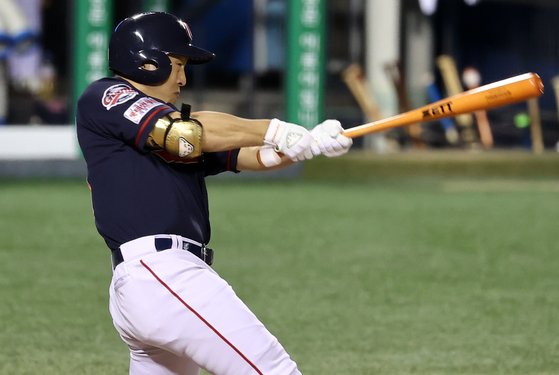 Son Ah-seop of the Lotte Giants hits an RBI double during a game against the LG Twins at Jamsil Baseball Stadium in southern Seoul on Sept. 29, 2020. [YONHAP]

But Son has time on his side. The 32-year-old still has plenty of playing time ahead of him, a lot more than 37-year-old Choi, who will likely retire in the next few years.

Son first picked up over 100 hits in 2010 and never looked back. He broke a century every season for the past 11 years, topping 150 eight times. At that rate and assuming he stays healthy, Son will pass 2,000 hits this year and should be able to break the all-time record 2,504 set by Park Yong-taik, formerly of the LG Twins, by 2026.

“I feel happy to hear that I have the potential to record the most hits," Son said on the sidelines of Lotte spring training at Sajik Baseball Stadium in Busan. "I also want to live up to fans' expectations. It gives me motivation to better take care of my body and develop technically."


"It was impressive to see Son winning through in the batter’s box,” said Lotte manager Her Mun-hoe, also a former batting coach. “There are players who do well only in practice, but Son has great concentration. He has excellent ability to cope in all situations.”

Son started his baseball career as Son Gwang-min, but changed his name in the hope of changing his luck in 2009. it obviously paid off for Son, and the SK Wyverns' Han Dong-min and KT Wiz's Oh Tae-gon have since gone through the same process, visiting the same naming center that Son used.

“I’m happy that I was a good influence, but changing your name doesn't solve everything,” said Son. “A hard-working mindset is important.”

Although Son has a relatively small physique for a baseball player, at 174 centimeters (5-foot-8-inches) tall and 84 kilograms (185 pounds), he holds a short bat and swings fast. Son isn't swinging for the fences with every at bat, but he can still rise to the occasion, with 164 home runs throughout his career.

“It's true that a player who plays a lot has a high chance of injury," he said. “My playing style is rough and I run a lot, but I’ve played without any major injuries so far. I’d like to participate in as many games as possible in the future.”

With baseball set to return to the Tokyo Olympics this summer, assuming the Games go ahead in July as scheduled, Son is a strong candidate for Team Korea.

"When I was a rookie in 2008, I had a dream of playing on a big stage after seeing the Beijing Olympic gold medal,” Son said. “Since then, baseball has been excluded from the Olympic Games and I haven't had an opportunity. This year, I want to make good results and proudly enter the Olympics. It is a dream for me."

Son is set to earn his free agency at the end of the 2021 season. Alongside the Olympics and Lotte's annual push to return to its former glory days, this is another big season for the budding batting king.

“I felt good energy on New Year’s day,” said Son. “Strangely, I felt refreshed and light. So far, preparations are going as planned. I think my good feeling will lead to good results.”