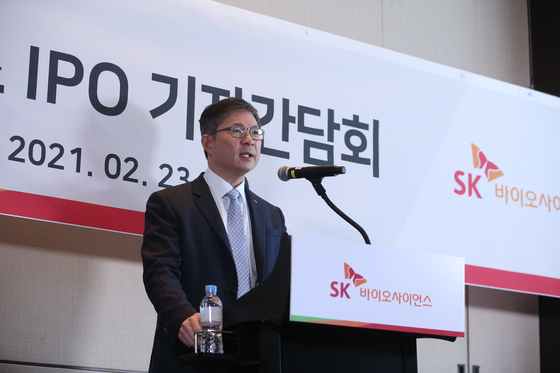 
SK Bioscience is planning to introduce its own Covid-19 vaccine in the first half of next year, the company’s chief executive said Tuesday.

A contract manufacturer of AstraZeneca and Novavax’s coronavirus vaccines, the SK affiliate has two vaccine candidates of its own --NBP2001 and GBP510 -- currently undergoing Phase 1 clinical trials.

“The deadline for market release is set during the first half of next year but we’re making efforts to accelerate this date as much as possible.”

The company’s Covid-19 vaccine development projects are funded by the Bill & Melinda Gates Foundation and the Coalition for Epidemic Preparedness Innovations (CEPI), an international foundation that promotes equal worldwide distribution of pandemic vaccines.

If it succeeds, part of SK Bioscience’s Covid-19 vaccines will be given to the Gates Foundation and CEPI for supply to underdeveloped countries. The bio firm has distribution rights for the remainder.

Skeptics have asked if SK’s Covid-19 vaccines can make money coming so late to the market. Ahn dismissed such concerns, saying existing vaccines are insufficient to inoculate underdeveloped countries and end the pandemic.

“In the end, the entire population in the world will have to be inoculated,” he said. “Vaccines using mRNA technology, for example, fit in the early stage of the pandemic because they can be rapidly made and injected.

"Over the longer term, it’s safety, efficacy, facility in transport and price that will decide the dominant product. Those were the factors that attracted Gates Foundation funding to our vaccine project. What we’re making is a ‘game closer.’”

In regards to vaccine contract manufacturing, the CEO said it’s “highly likely” that the business will continue to generate revenue. According to Ahn, industry watchers estimate the coronavirus vaccine market could reach above 15 trillion won a year.

“In the past year, it’s become the largest product segment in the entire vaccine market and I believe this trend will persist for a while,” he said. “Coronavirus inoculations will likely become a reoccurring event because the life span of antibodies is not long.”

Ahn noted that SK was getting requests from AstraZeneca and Novavax for additional vaccine production deals, and from other bio companies as well. Its only factory in Andong, North Gyeongsang, is running at full capacity with no room for additional contracts, he said.

Currently a subsidiary of SK Chemical, SK Bioscience is getting ready for an initial public offering (IPO) this year. After being spun off as a separate entity in 2018, the company had been quietly growing, finally reaching the break-even point last year with annual revenues a little less than 200 billion won ($180 million), Ahn said.

The Covid-19 pandemic, and the deals that came with it, put the spotlight on SK Bioscience in an unprecedented way.

Having passed Korea Exchange’s preliminary review this month, the vaccine company plans to go public on the Kospi market next month. It will sell 22.9 million shares priced between 49,000 and 65,000 won to raise 1.5 trillion won.

From that amount, 400 billion won will be invested in expanding facilities, the CEO said.