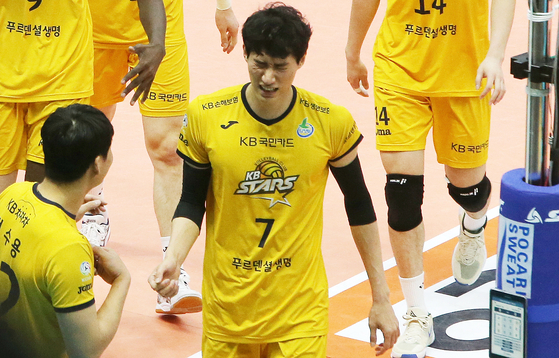 Park Jin-woo leaves the court during a game against Ansan OK Financial Group Okman on Sunday. He tested positive for the coronavirus the following day. [YONHAP]

The Korean men’s volleyball league will suspend all games for two weeks after a player tested positive for the coronavirus.

The Korean Volleyball Federation announced on Tuesday that it has temporarily suspended all men's V-League games in accordance with its response manual, after Uijeongbu KB Insurance Stars center Park Jin-woo tested positive for Covid-19.

The federation will later announce when games will resume and an updated schedule, depending on the number of confirmed cases.

Park reported a fever on Monday morning and took a Covid-19 test at a screening clinic. He was confirmed positive later that afternoon.

The middle blocker played in a game against Ansan OK Financial Group Okman at Uijeongbu Gymnasium in Uijeongbu, Gyeonggi on Sunday.

As a result, all players from both teams and officials who attended the match will immediately receive Covid-19 tests. Additional tests will be conducted for anybody classified as a close contact to any of the players or officials.

Women's volleyball games will proceed as scheduled if no additional confirmed cases occur, depending on the Covid-19 test results on officials.

Among volleyball players, only foreign players such as KB Insurance Stars’ Keita Noumory and Incheon Heungkuk Life Pink Spiders’ Bruna Moraes have tested positive for Covid-19, but both did so before games began and did not affect the league schedule.

More than 1,500 people including players from 13 male and female teams were tested for the virus at the time, but no additional cases were found and play resumed on Jan. 5.

A tense week of volleyball