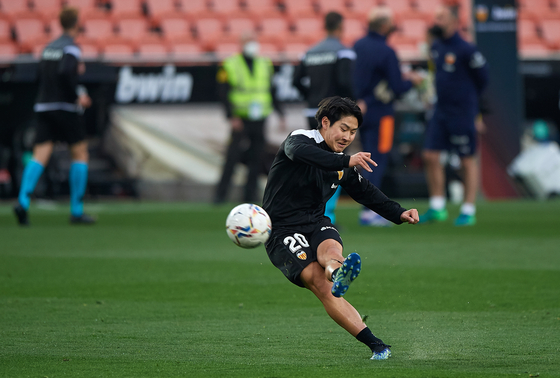 Lee Kang-in of Valencia warms up before a La Liga match against Celta Vigo in Valencia, Spain, on Feb. 20. [YONHAP]

Multiple reports in Spanish publications indicate that Real Madrid are interested in Lee, an attacking midfielder who's contract with La Liga side Valencia is set to end next year.

Lee, known more as a play-maker than a big goal scorer, has been attached to Valencia for almost a decade. Lee joined the Valencia academy in July 2011, when he was just ten years old, eventually being called up the second-tier team in 2017. Lee made his first team debut in 2018 in a Copa del Ray game, before appearing in a La Liga game in 2019.

Lee has since made 35 appearances for Valencia, scoring two goals and picking up four assists, all four of which were this season.

Despite his success on the pitch, the 20-year-old hasn't had much playing time so far this year, having spent a good part of January on the bench before being brought on in Valencia's 2-0 win over Celta Vigo at Mestalla Stadium in Valencia, Spain on Feb. 20.

According to Spanish football media company Defensa Central, Lee is unhappy at Valencia and interested in a move when the transfer window reopens in the summer. Although this report is unconfirmed, it could be true that Lee is willing to look elsewhere as his current club make little use of his offensive skills.

Lee's ability to play in any midfield or attacking position could appear to Madrid, who have lost some of their strongest offensive players this season. The potential move would also take Lee to one of the biggest football clubs in the world, potentially increasing his value both on and off the pitch.

The recent surge in popularity of Tottenham Hotspur's Son Heung-min and the obvious marketing potential that having a player like that on the squad can bring could also appear to Madrid.

Lee, who first appeared on Korean TV when he was just six years old, is already a much-loved player here, and any team that signs him is bound to see a big boost in Korean support. Valencia likely know that only too well, adding to their unwillingness to release Lee.