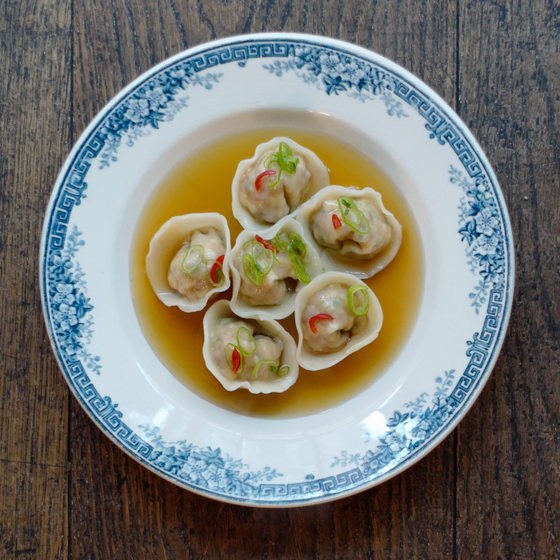 Manduguk, also known as soup dumplings, is one of the dishes the chef eats most often at his home. In Korea, manduguk is known as something easy to cook as long as you have some frozen mandu stocked up in your fridge. Making mandu from scratch is usually considered a full-day of work, and family members used to gather together to make them. They even compete to see who makes the best-looking mandu. [AGENCE NEROLI]


Kimchi fried rice, yukhoe, bossam, and manduguk, or soup dumplings, are all available to eat hot at your home, in Paris. Staple Korean foods, available through a quick delivery, have become possible in one of the global gastronomic cities in Europe, thanks to Michelin-starred restaurant Quinsou trying to keep its place running even the times of the pandemic. 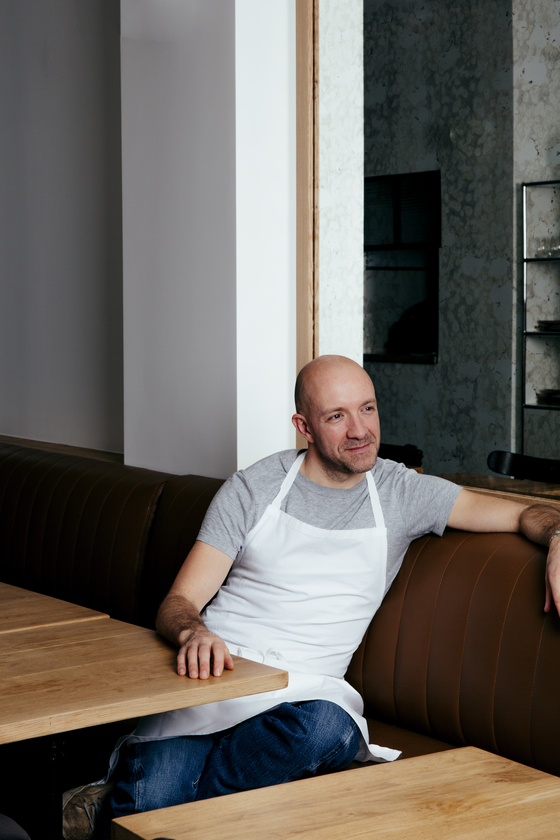 Chef Antonin Boneet of Michelin-starred restaurant Quinsou in Paris at his restaurant. He has decided to make Korean food to deliver to home diners during the times of the pandemic that kept many of the restaurants in Paris stayed closed. [VIRGINIE GARNIER]


Chef Antonin Bonnet, like many other chefs who suffered from their restaurant being shut down for months and sought ways to pack up the food in deliverable boxes, decided to think differently. He didn’t focus on the food he used to cook before the pandemic hit. His choice now is Korean.

Since 2003, eating Korean food has become part of his daily routine. Being married to a Korean woman whose hometown is Jeju Island, one of the regions in Korea known for its abundant varieties of seafood, he has developed his own understanding of extensive range of Korean food through his annual trips to the country for over a decade.

As a person who never had Korean food before 2003 to a person who eats it almost every day at his home in Paris, he decided to take a shot at sharing what can be best enjoyed at homes of others. 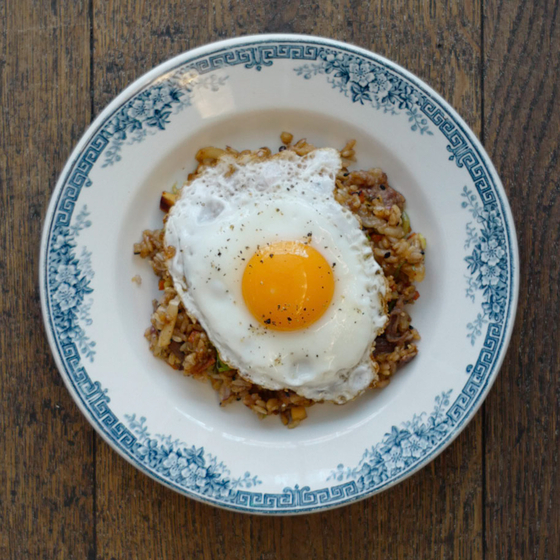 Kimchi fried rice, also known as kimchi bokkeumbap, is one of the best sellers at Quinsou among the menus available under Mamibaba. While it is usually cooked with some meat inside, the dish can be made for vegetarian. The restaurant offers either tofu or pork to fit many different dietary preference. [AGENCE NEROLI]


“Packing up food with all the different garnishes and sauce in many different boxes was a struggle,” said Antonin during the phone interview with the Korea JoongAng Daily. “And it was also a struggle for people at home to warm up the dishes and plate all the items.”

Then one of his friends asked, why don’t you make what you eat at home for the people looking for food to eat at home? 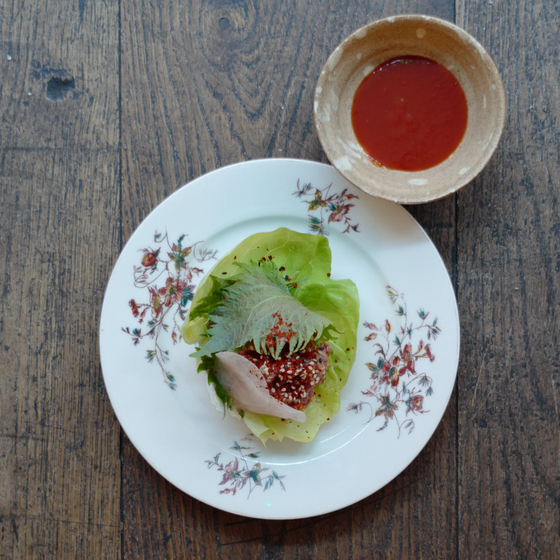 
His team soon decided to try cooking different dishes, and cooked home food slightly adapted for restaurants. The options the chef has chosen include many of none spicy food, such as widely popular mandu, or dumplings, and pajeon, Korean style pancake made with scallions. Raw beef dish called yukhoe, which is similar to beef tartar the French people also feel very familiar with, is another available menu for Quinsou. The popular Korean style fried chicken is of course there as well. For those who feel like to have a hint of spiciness that comes with Korean food, kimchi fried rice as well as pork bossam with some radish strips seasoned with gochugaru, hot pepper flakes. The chef uses the Korean names of each ingredients or the names of the menu in a way to have more people become better aware of what it is called in Korean. 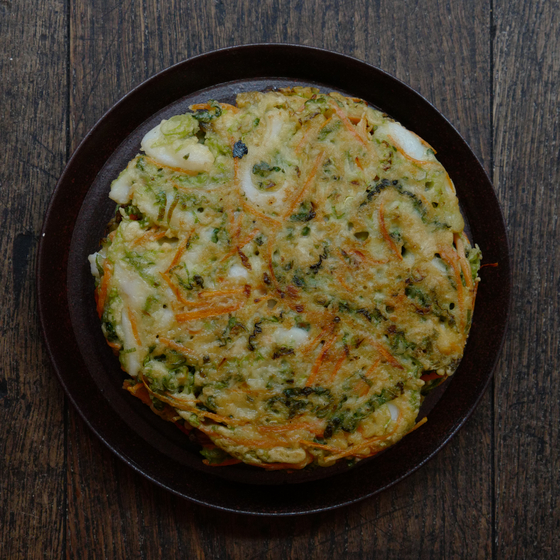 Haemul Pajeon, a Korean style savory pancake made mostly with scallions accompanied by all kinds of seafood, is widely loved for its crunchy texture that embraces the softer inside. Many Koreans usualy pair the dish with makgeolli, fermented rice drinks. The combnation of the two are most sought after on a rainy day. [AGENCE NEROLI]


The recipes really come from the routines he has devised to cook Korean food at home, the style he learned from his wife, mixed with all the culinary experiences he has had during his travel to Korea over the decade. He gave the collection of such Korean dishes available for delivery the name of Mamibaba. Individual dishes usually start from 11 euros, and you can even make a set of your own appetizer, main and dessert for 24 euros. An additional side of kimchi is also available for 5 euros. There are usually about four to five appetizers and about four to five main dishes for home diners to choose from. 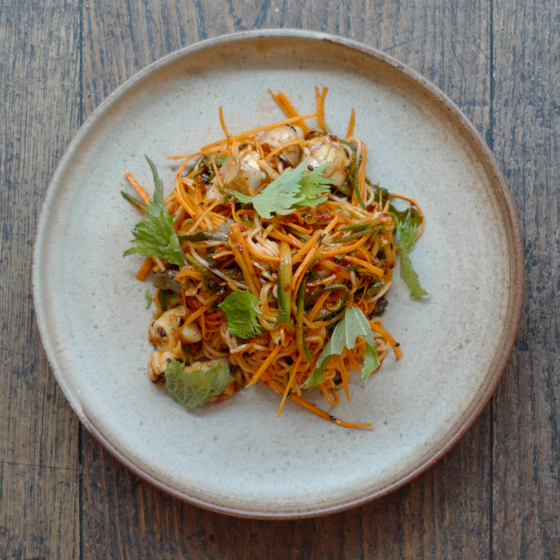 Golbaengi muchim, is a type of snails seasoned with spicy sauce and mixed with vegetables. is a dish many Koreans go for when they drink beer. Many of the fried chicken place usually have such dish for those who want spicier flavors to match with their drinks. [AGENCE NEROLI]


He sources most of the produce locally, and outsources the key seasonings and sauces like doenjang, fermented soybean paste and gochujang, fermented hot pepper paste. Although it would never be like what he could find in the market on Jeju Island, he said Paris today has proper Korean supermarkets with products. 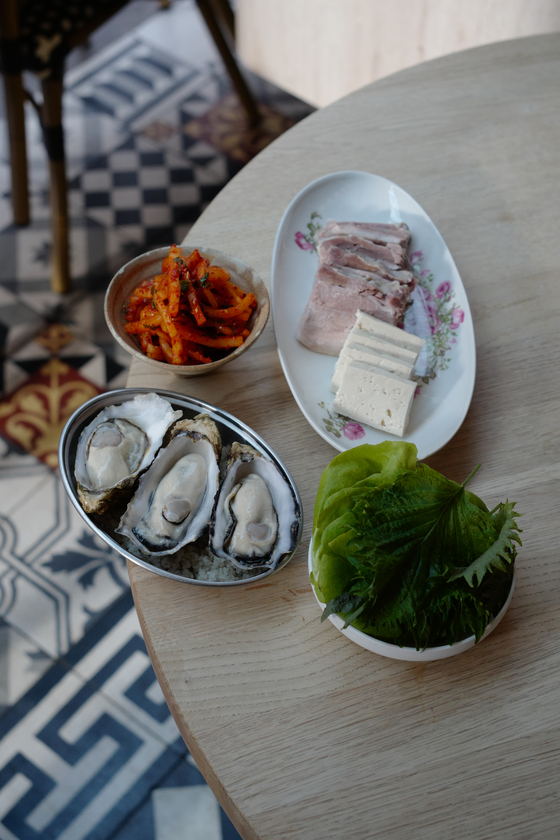 Bossam, or steamed pork, comes with many different sides to eat together, such as oyster, and radish seasoned with gochugaru. [AGENCE NEROLI]


“I wanted to choose menu items that could convince French people that Korean food is approachable and yummy,” said the chef. “These dishes may not be the most delicate, but it is perfect for many to push the button and say ‘let’s have Korean food because it is nice’ as you stay a bit lazy at home.”

Even for average Koreans, the look of the dishes the restaurant has shared on its social media seems very similar to what they could easily find at any Korean restaurant here. It even has golbaengi muchim, one of the popular dishes to eat as part of a meal and as a snack when drinking beer. It has a type of snail seasoned with spicy gochugaru and vegetables and often served with thin noodles. Even for a Korean chef Lee Jun-ha, who used to work at Quinsou and has tasted all the menu items for delivery, said the overall taste of the dish is very true to what he used to eat in Korea.

“The understanding of the Korean dishes overall among the locals in France is extensive compared to seven years ago when I first arrived in this country,” Lee said. Lee is currently working at butcher shop La Boucherie Gregoire, a sister spot to Quinsou. 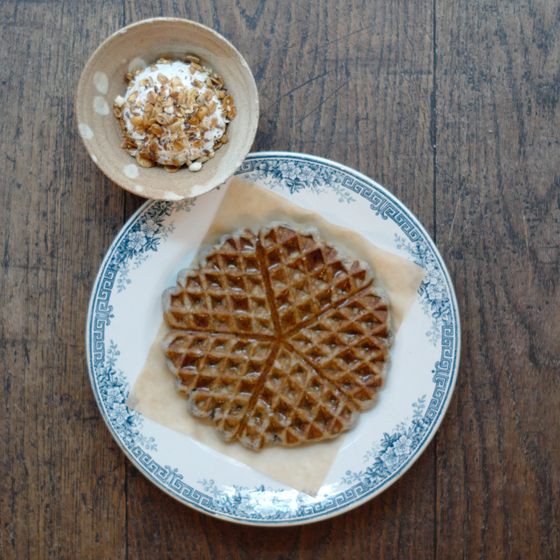 Black sesame waffle, added with cinnamon whipped cream. Restaurant Quinsou, alongside its savorty selections, offers some sweeter dessert to end the meal. It uses sesame, one of the most widely used ingredients in Korean cuisine, to keep the hint of Korean flavors until the very end of a meal at home. [AGENCE NEROLI]


For a fun twist to better introduce Korean food, the chef made a burger to show his style of Korean food. The Dong-geulangttaeng Burger is one of the most popular items on the menu, and the patty is basically the large size version of donggeulangttaeng, mostly eaten on national holidays. Round cakes made with minced meat and veggies are pan fried after they are coated with eggs.

As it’s been more than a month since the restaurant started doing the Korean dishes, the chef is also thinking about changing some items to make dishes more seasonal and to introduce more to those in Paris. Tteokbokki is one particular dish he likes for its chewiness and he is curious if others would like the texture as well.

Although it’s the first time for the restaurant to push Korean food up front, it has attempted to introduce the flavors step by step through its sister butcher shop opened about two years ago. At La Boucherie Gregoire, he started to sell kimchi sausage as well as some jangajji, fermented vegetables in soy sauce alongside kimchi. Many of the French locals come by to buy a jar or two to keep at home. Most of them are already aware of what kimchi is and how to eat it, and people rarely ask what it is and how to eat it. Just like someone who are aware of what tomato pasta is would buy ingredients from a nearby supermarket and look for recipes online that fits their taste the most to follow at home, the same cooking routine has been spotted with ingredients with Korean flavors.

What the chef also wants to do is record the recipes of dishes he picked up from his wife and her family. Although now there are many recipe books available to cook Korean food even in many different languages, still many of the grandmothers in Korea known for their particular taste often don’t have an exact recipe and always say a bit of salt, or a fistful of sugar without mentioning the exact amount. To be able to more easily explain the expected taste from certain dishes for his team, the chef has been recording recipes, and said he got it about 80 percent accurate. He understands that the Korean food cooked in Paris can never be the same as the one cooked in Korea, so tries to find the best way to make up for the difference. That’s why he thinks mastering the Korean way of cooking, just like many practice French cooking techniques to make the French food taste more French, is important.

“If you have the techniques mastered, you can use fresh produce available in France to adapt [Korean food], and that’s the smart thing to do especially when you think about the environment as the use of what’s local is fresher and economical while maybe healthier and tastier.”

Rest, relaxation and raving at sea