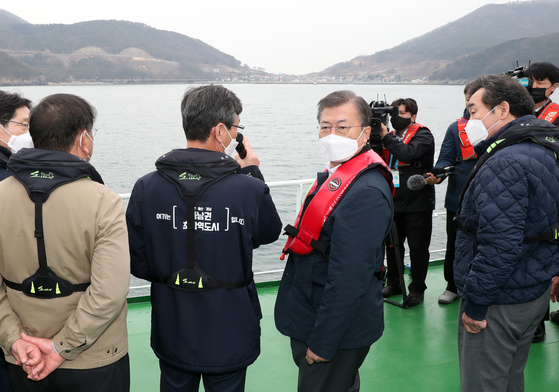 President Moon Jae-in, second from right, listens to a presentation by Acting Busan Mayor Lee Byung-jin about a plan to build a new airport on Gadeok Island on Thursday. [YONHAP]


President Moon Jae-in and an entourage of political bigwigs spent a day in Busan Thursday, attending elaborate events describing its future as a megacity.

The idea of developing Busan, Ulsan and South Gyeongsang as a megacity, similar to the capital region including Seoul, was first proposed by South Gyeongsang Governor Kim Kyoung-soo in 2019. Thursday's event followed up the idea with a concrete blueprint.

Moon's visit to Busan, his first in a year, took place at a sensitive time, as the country's second-largest city is scheduled to elect a new mayor on April 7 in a by-election. Last year, Busan Mayor Oh Keo-don, the first DP politician ever to win the post, resigned after admitting to sexually molesting a City Hall employee.

"Busan, Ulsan and South Gyeongsang joined their forces today to make a leap," Moon said, praising the goal of developing the region into a megacity that will be the eighth largest in Northeast Asia. "By 2040, the region plans to build a megacity with a 10 million population and an economy of 490 trillion won [$442 billion]," Moon said. "And this is not an impossible challenge."

The main opposition People Power Party (PPP) complained Thursday that the president was overtly intervening in the by-election. "The president must remember that his blatant attempt to influence the election is grounds for impeachment," Rep. Joo Ho-young of the PPP said Thursday morning.

Joo said Moon was shamelessly backing the DP's election campaign. "No matter how you look at it, the president has gone too far," Joo said. He dismissed the Blue House argument that Moon's visit was intended to check on the progress of his Korean New Deal project.

The PPP said Moon abandoned his constitutional duty to maintain political neutrality and started a legal review of a possible criminal complaint against the Blue House for election law violations.

A PPP lawmaker representing the region said the timing of Moon's visit was obviously political. The DP's Busan Chapter announced Wednesday pledges for the mayoral by-election, including a promise to build a new airport on Gadeok Island near Busan. The DP leadership also said it will use its majority in the National Assembly to pass a special bill on airport construction on Friday.

The PPP said the DP was appropriating the airport project. "We promoted it too," said a PPP lawmaker representing Busan. "The DP is staging a political show to take all the credit."

The megacity project aims at building an economic community of 8 million people in Busan, Ulsan and South Gyeongsang, the Blue House said. Specific plans to integrate the three regions as an economic, lifestyle, cultural and administrative community were being drafted by the local governments and backed by the central government.

According to the Blue House, the Moon administration has plans to support the strategy to establish a "tri-port" logistics platform in the southeastern region by investing in ports, airports and railway networks. Examples of "tri-port" megacities, according to the Blue House, are the capital area of Seoul; Beijing, Shanghai and Hong Kong in China; and Osaka, Nagoya and Tokyo in Japan.

Shortly after his arrival at Busan, Moon visited Bujeon Train Station and received the briefing from Ulsan Mayor Song about a plan to establish a metropolitan transportation network.

The highlight of Moon's visit to Busan was a presentation about a new airport on Gadeok Island. Acting Busan Mayor Lee Byung-jin gave the presentation to Moon aboard a ship traveling from Busan New Port to the waters near the island.

In November, the Moon administration ditched plans to expand the existing Gimhae International Airport in Busan, paving the way for a new airport to be approved just months before the mayoral by-election. At the time, an expert committee appointed by the Prime Minister's Office concluded that the Land Ministry's plan to expand Gimhae airport will be reconsidered.

Following the decision, the administration and the DP started efforts to revive a shelved plan to build an entirely new airport in Korea's southeast. Moon has been a backer of a new airport since his first presidential campaign in 2012.