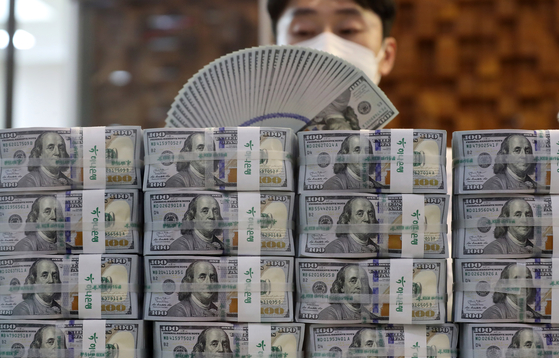 A Hana Bank employee in Myeong-dong, Seoul, counts dollars in this file photo. The BOK announced it extended a currency swap arrangement with Switzerland for five years. [YONHAP]

Korea and Switzerland agreed to extend their currency swap agreement for five years.

The Bank of Korea (BOK) said Monday that it agreed with the Swiss National Bank to extend the 1 billion Swiss franc ($10.6 billion) arrangement until March 2026.

The agreement was originally signed three years ago, so the new one is two years longer.

Switzerland is one of six "key currency" countries with such swap agreements with Korea. The BOK said Monday they provide a “safety net” for times of financial crisis.

“This agreement is designed to enhance bilateral cooperation and to facilitate the functioning of financial markets of the two countries,” the BOK said in a statement.

In October the BOK signed an agreement to not only increase the currency swap deal it has with China from $56 billion to $59 billion but also extended its term from three to five years.

In December, the BOK signed an agreement with the U.S. Federal Reserve to extend the currency arrangement between the two countries for another six months until the end of September.

Korea had a currency swap agreement with Japan since 2001 that grew to $70 billion in 2011. But in 2012, Tokyo decided not to extend it to protest President Lee Myung-bak’s visit to the controversial Dokdo islet, which both Korea and Japan claim. 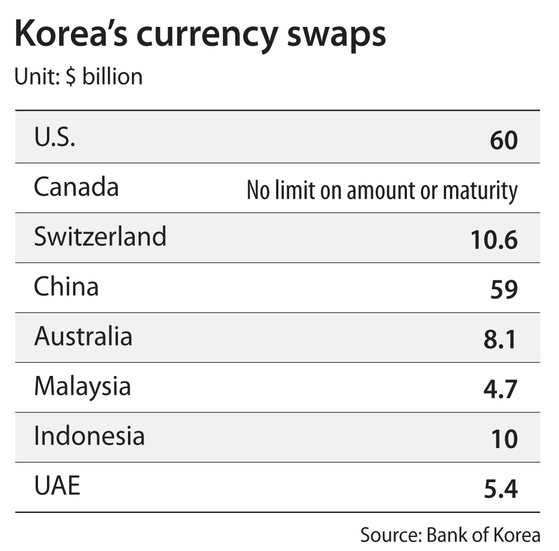