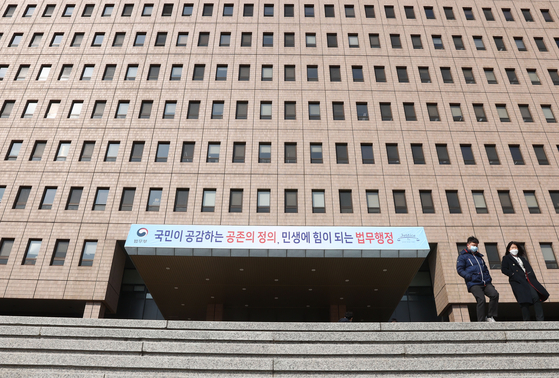 The Ministry of Justice building in Gwacheon, Gyeonggi, on Feb. 19. [YONHAP]

The Ministry of Justice is suing the descendants of four people who collaborated with Japan during its occupation of Korea to seize the assets they made from the collaboration.

“The four were designated by the government in 2007 to have been pro-Japanese collaborators,” said Park Cheol-woo, spokesperson for the ministry, during a press briefing on Friday. He was referring to Lee Hae-seung, Lee Gyu-won, Lee Gi-yong and Hong Seung-mok.

“They [and their descendants] are being sued for the assets made from the collaboration with the Japanese during the time of the occupation,” Park said. The assets include 11 plots of land worth some 2.7 billion won ($2.4 million), according to the ministry.

It is possible for the Korean government to strip descendants of Japanese collaborators of the assets they inherited, according to the Special Act on Asset Confiscation for Pro-Japanese and Anti-national Collaborators to the State, passed in 2011.

According to that and other laws in Korea, Japanese collaborators include those who received or succeeded to a title of nobility under Japanese Imperialism; who killed or wounded, executed, cruelly treated, or arrested a person who participated in the independence movement of Korea; or facilitated or helped Japan annex Korea in 1910.

Although Japan occupied Korea from 1910 to 1945, the laws in Korea designate Japanese collaborators as those who performed the duties mentioned from 1904, when a war broke out between Russia and Japan over their imperial ambitions over Korea, to 1945.

The Ministry of Justice has taken over the task of investigating Japanese collaborators since 2010, which was previously conducted by the Investigative Commission on Pro-Japanese Collaborators' Property, a presidential body that existed from 2006 to 2010.

Since 2010, the ministry has filed 23 lawsuits against Japanese collaborators and their descendants to claim their assets. As of Monday, they had won 17 of those cases, collecting 26.7 billion won total, according to the ministry.

The Ministry of Veterans and Patriots Affairs, which helps oversee management of such assets, announced it will be putting some of those assets up for sale.

“We are helping manage 855 plots of land that were confiscated from the pro-Japanese collaborators, and we decided to put 148 plots on sale,” the ministry said in a statement on Sunday. “The profits will go to independence fighters and their descendants.”

According to the ministry, a total of 1,297 plots of land have been confiscated from Japanese collaborators since 2006, counting all the assets confiscated by the Investigative Commission on Pro-Japanese Collaborators' Property and the Ministry of Justice.

From 2008 to 2020, the Ministry of Veterans and Patriots Affairs sold some of these plots, making a profit of 69.8 billion won, which has been used in programs to support independence fighters and their families, according to the ministry.