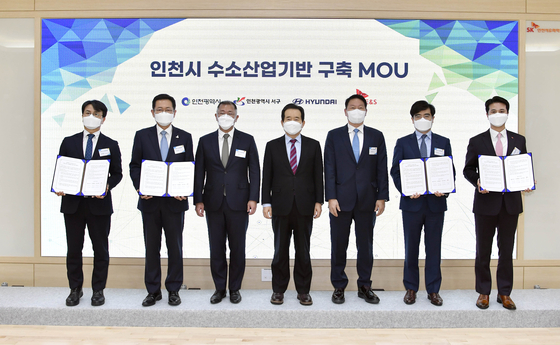 Hyundai and SK Group, the second and third-biggest groups in Korea by assets, formed a partnership Tuesday to work on utilizing hydrogen-powered cars and setting up a charging infrastructure.

“Hydrogen is not only a source of energy but it can also store it, which is expected to make it an ‘energy currency’ when carbon neutrality is achieved,” Chung said.
“The collaboration with SK Group will establish a hydrogen ecosystem where the energy is organically produced, retailed and utilized.”

Under a memorandum of understanding (MOU) signed Tuesday, SK will gradually replace some 1,500 vehicles in operation on its work sites with Hyundai Motor hydrogen-powered vehicles including cargo and pick-up trucks.

A Korean version of the Hydrogen Council dubbed the K-Hydrogen Council is also expected to launch within the first half of this year with Hyundai Motor Group, SK Group and Posco as members.

The Hydrogen Council is a global lobbying group comprised of business leaders that promotes hydrogen energy. Chung co-chaired the group until 2020.

Hyundai Motor Group is taking the lead in hydrogen-related businesses in Korea.

Under Chung's leadership, Hyundai Motor has reached several milestones in the past couple of years.

Its Nexo hydrogen SUV, which launched in 2018, was the world's most popular hydrogen-powered car last year, accounting for more than half of the market.

Hyundai launched a brand dedicated to the system called HTWO last year and has started to export the system. It plans to produce 700,000 units of the system annually by 2030.

Meanwhile, Hyundai Motor broke ground on its first overseas production plant for the system in Guangzhou, China on Tuesday. The local corporation is called HTWO Guangzhou.

The plant is scheduled to be completed by the latter half of 2022. Built on a 207,000-square-meter plot of land, the plant aims to produce 6,500 units of fuel cell systems annually.

The Guangzhou unit is a strategic base for Hyundai Motor to penetrate China’s hydrogen-powered vehicle market, which the carmaker expects to be one of the world’s largest by 2035. The Chinese government pledged to supply 1 million units of hydrogen vehicles by 2035. 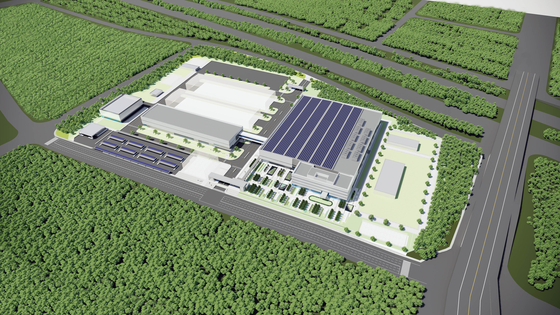