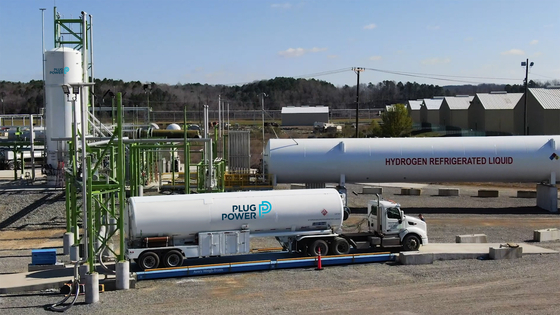 The deal marks the first time that SK Group has invested in a hydrogen-related business in its near seven decades operating a number of energy business including an oil refinery, lithium-ion battery manufacturing and natural gas.

SK Holdings, the holding company of the conglomerate, and its natural gas affiliate SK E&S, will acquire 9.9 percent of the Nasdaq-listed company, each investing 800 billion won ($733 million). They will purchase approximately 51.4 million shares of Plug Power's common stock at about $20 per share. The deal is expected to be completed by the first quarter of this year, according to the filing.

Through the partnership, the two companies are planning to form a joint venture in Korea next year to start a hydrogen-related business in Asia, including providing fuel cell systems, hydrogen fueling stations and electrolyzers.

"In Korea, it plans to utilize Plug Power's technology to form a hydrogen ecosystem that SK has been envisioning," the company said in a release. "While in other Asian markets such as China and Vietnam, SK Group's existing network will be of good use in securing new business opportunities."

It has already delved into the hydrogen-based mobility business as well, such as supplying hydrogen-powered forklift trucks to U.S. retail giants like Amazon and Walmart.

The company, however, has been losing money for some time. According to its earnings report, it posted $85.5 million of net loss in 2019, following $78.2 million and $127 million in net losses in the previous years.

Plug Power is betting on SK Group's industrial presence in Korea as the country's third biggest conglomerate by assets, in coordination with the current government's strong push to be carbon neutral in the next 30 years.

Hydrogen has emerged as a new gold mine for Korean companies lately amid the government's aggressive push to use more environmentally friendly energy instead of fossil fuel.

Hyundai Motor has been doing research and development on fuel cell vehicles for more than 20 years and is now developing the fuel cell system itself. It said last year it would invest 14.9 trillion won in the energy and has recently reported it is in the final stage of building a hydrogen fuel system factory in China.

Hanwha Solutions, an energy and chemical affiliate of Hanwha Group, recently also announced that it will invest $100 million in a U.S. hydrogen tank manufacturer Cimarron Composites by 2025.

SK Group established last year a dedicated team that promotes hydrogen-related projects comprising of 20 experts from related affiliates. Through the move, the conglomerate aims to have a production capacity of 280,000 tons of hydrogen by 2025.