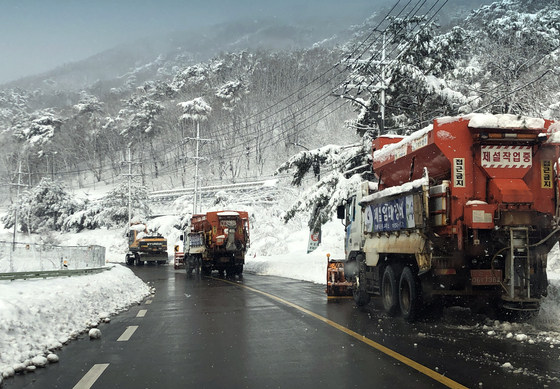 Snow clearing efforts are underway in Yangyang County, Gangwon, Tuesday afternoon after heavy snowfall since Monday led to one death and hundreds of stranded vehicles due to slippery roads. [NEWS1]


Unexpectedly heavy snow on Monday and Tuesday trapped hundreds of vehicles and caused heavy traffic and accidents, resulting in one death and dozens more injured.

On the last day of a three-day weekend, Gangwon saw up to 88 centimeters (34.6 inches) of snow in its coastal region, much more than initially forecast by weather authorities. On Tuesday, at least 10 centimeters more was expected.

The Central Disaster and Safety Countermeasures Headquarters said Tuesday morning that at least 79 accidents related to icy roads were reported, resulting in one death and 94 injuries.

A 51-year-old driver got out of his vehicle after it skidded off a slippery road near a tunnel in Hongcheon County, Gangwon, on the Seoul–Yangyang Expressway and was hit by another car at 4:19 p.m. Monday.

Around an hour later, at 5:16 p.m. a triple collision occurred on a road in Nogok-ri in Samcheok, Gangwon, injuring five people who were sent to a nearby hospital.

Traffic was restricted on major roads in cities and counties including Goseong, Inje, Pyeongchang, Gangneung, Chuncheon, and Pocheon as heavy snow continued into the evening Monday, a holiday marking the anniversary of the March 1 Independence Movement.

Hundreds of cars were trapped on a two-kilometer section of the Donghae Expressway, which connects Sokcho and Busan, as well as on the Seoul–Yangyang Expressway into early Tuesday.

One driver stuck on the expressway, 43-year-old Mr. Kim, who was driving home after business in Gangneung, Gangwon, said, “It took 10 hours just to get back to Chuncheon,” the capital of the province, a drive which usually takes under two hours.

He said, “Three hours of that time was spent with the car not moving even one meter.” 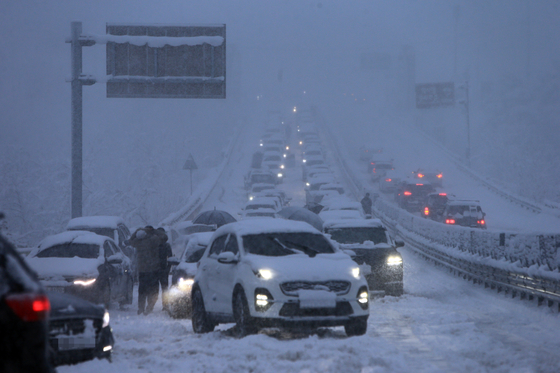 Cars are stuck on the road at Misiryeong Valley in Gangwon amid heavy snowfall Monday, the last day of a three-day weekend. [YONHAP]

The Gangwon Fire Headquarters said Tuesday that there were 30 cases of people trapped in their vehicles, and that 45 people had been rescued.

Snowfall also halted trains. At 7:10 p.m. Monday, a train on Korail’s Yeongdong Line, which goes from Baeksan Station to Dongbaeksan Station, suspended operation because of an avalanche.

Yangyang County provided emergency supplies including some 1,500 servings of bread, milk and bottled water and 200 blankets to the Korea Expressway Corporation (KEC) to distribute to stranded drivers Monday. The KEC also distributed 320 liters of fuel.

Snowfall averaged 77.6 cm in the mountains and 10 to 20 centimeters inland Monday.

As of Tuesday morning Misiryeong Valley in Gangwon accumulated 89.8 centimeters of snow, the Jinburyeong mountain pass over 72 centimeters and Seorak-dong in Sokcho over 71 centimeters. 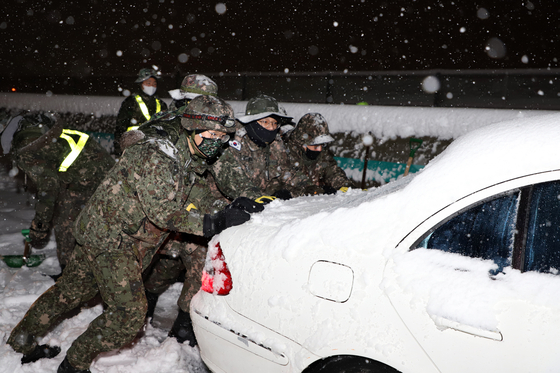 Soldiers from the 8th Army Corps and 102nd Armored Brigade push a car stuck on the road during a snowstorm Monday in Sokcho, Gangwon. [NEWS1]

Gangwon’s Disaster and Safety Countermeasure Headquarters said that it dispatched 1,096 personnel and 955 units of snow removal equipment, along with 4,170 tons of salt to clear the roads.

Some 160 soldiers were dispatched to move stranded vehicles and help with snow removal.

Over 90 schools in Gangwon either canceled or delayed classes on Tuesday, the start of a new semester, according to the Gangwon Provincial Office of Education.

Gangwon had been undergoing a dry spell since Feb. 16, leading to forest fires last month.