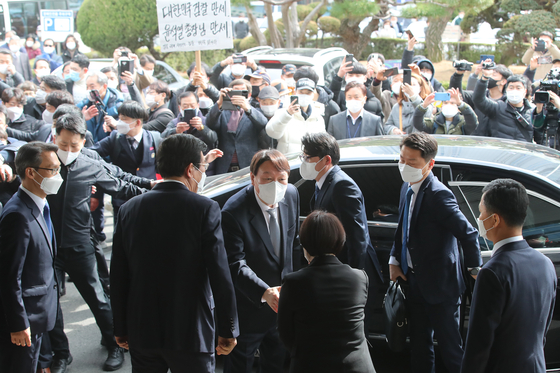 Prosecutor General Yoon Seok-youl arrives at the Daegu District Prosecutors' Office on Wednesday, surrounded by his supporters and members of the media. [NEWS1]


Arriving at the Daegu District Prosecutors' Office on Tuesday, Prosecutor General Yoon Seok-youl denounced plans by the ruling Democratic Party (DP) to strip the state prosecution service of its investigative powers, calling it a “sellout to corruption.”

“The plan currently in progress to completely divest the prosecution service of its ability to conduct investigations would inflict constitutional damage upon the country and government,” Yoon said to the supporters and reporters who crowded around him near the entrance of the building. “Fighting against corruption and graft is for the protection of all people, and it is the constitutional duty of the state and the government.”

In a separate 40-minute phone interview with the JoongAng Ilbo on Tuesday, Yoon clarified his opposition to the ruling party’s plan to separate the investigative and indictment powers.

“You can take every [prosecutor] out from under me to create new investigative and prosecutorial agencies in every category of crime,” he said. “But whatever form or structure those new state agencies might take, the power to investigate and indict must go hand in hand in order to maintain the the state's effectiveness in fighting serious crime.”

Yoon added that if the proposed plan went ahead, “Our society would return to the days of when influential figures abused their power and tormented powerless working people.”

“It is to demonstrate that [Yoon’s] opposition to a new state investigative agency is not merely about preserving the authority of the prosecutor general or the self-preservation of the prosecution service,” the source said.

Yoon’s visit to the Daegu branch of the prosecution service was his first publicly scheduled event since his suspension was overturned by an administrative court ruling in December.

The Daegu District Prosecutors’ Office is known as a place of exile for several Seoul prosecutors who were demoted after conducting politically sensitive investigations into criminal cases of President Moon Jae-in's political allies.

These demoted, former Seoul-based prosecutors include Kim Tae-eun, who investigated claims that the Blue House intervened in the 2018 Ulsan mayoral election, and Ko Hyeong-geun, who was replaced after investigating corruption allegations against the family of former Justice Minister Cho Kuk.

Yoon himself was sent down to the Daegu branch of the prosecution service after he led a 2013 investigation into the National Intelligence Service’s involvement in manipulating public opinion in the lead-up to the 2012 presidential election.

Ahead of Yoon’s visit, the path outside the Daegu prosecutors’ office was festooned with standing wreaths of flowers and long ribbons with encouraging slogans such as “Defend our democracy and destroy the parasites!” and “Don’t you dare touch prosecutors of conscience!” Yoon was also greeted upon arrival at the Daegu office with a bouquet of flowers from Daegu Mayor Kwon Young-jin and placard-holding supporters cheering him on.

Meanwhile, members of the ruling party have expressed their dismay concerning Yoon’s outspokenness against the idea of stripping investigative powers from the prosecution service.

“The way in which Yoon speaks or behaves is reminiscent of the behavior of a politician, not a civil servant,” Prime Minister Chung Sye-kyun said in an interview with TBS Radio.

“If he has an opinion as prosecutor general regarding prosecutorial reform, he ought to speak with the National Assembly. [A media interview] is not appropriate,” Chung added.

Speaking with reporters on his way to work on Wednesday, Justice Minister Park Beom-kye said, “I would like to meet with [Yoon] directly to have discussions, so I am somewhat disappointed he prefers to talk to the media in this way.”

Park added, “The separation of investigative power from the authority to indict is not a question of efficiency. Rather, it arose from the need to reform problems surrounding the prosecution service, such as its abuse of power and the direction of investigations.”

No return to the past (KOR)

No return to the past