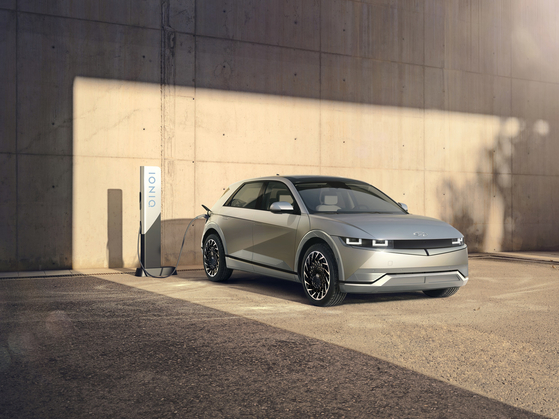 Hyundai Motor’s Ioniq 5 started to roll out of its Ulsan factory on Wednesday, but it remains to be seen whether the 40,000 customers who have preordered the model will be able to get their hands on the car before state subsidies for EV purchases run out.

If customers are not able to access subsidies, a significant portion of the preorders placed on the Ioniq 5 are likely to be canceled.

Korea's subsidy plan for EV purchases is based on a first-come, first-served system, and if the cars are not delivered to customers within two months of applications being submitted, the subsidy payout gets canceled.

For Busan, 66 percent of available subsidies have already been reserved, according to the ministry.

Tesla is suspected to have taken most of the subsidy budget, as 3,186 units of its Model 3 were delivered in March alone.

"For Seoul resident, nearly 25 percent of the Ioniq 5's price is discounted through subsidies and if that is jeopardized, I wonder how many customers are willing to buy the model at its full price of 52 million won," said Kim Pil-soo, an automotive engineering professor at Daelim University.

Hyundai Motor is yet to normalize the production of its much-anticipated Ioniq 5, which was the first model to be made on its EV-dedicated platform E-GMP.

The model garnered a record-breaking 23,760 preorders on its first day and has so far collected at least 40,000 preorders since February.

Fulfilling those orders faced a major obstacle earlier this month when Hyundai Mobis failed to supply enough electric motors for the Ioniq 5. Hyundai Motor had to slash its monthly manufacturing goal from 10,000 units in April to 2,600.

The woes continued as Hyundai Motor couldn't dodge a global auto semiconductor shortage. It even had to shut down its Ulsan plant — where the Ioniq 5 is made — for a week in mid-April due to chip shortage.

The carmaker has reportedly only been able to manufacture 1,000 units of the Ioniq 5 in April.

Production reduction is likely to get worse in May as the automaker admitted in a conference call last week that the impact of the prolonged chip shortage will be similar or worse in May.

The Ministry of the Environment recently said an additional supplementary budget could be possible to make up for the difference.

Even so, the situation is not rosy for Ioniq 5 customers as Tesla will began delivering its Model Y, a direct rival model to the Ioniq 5, from May.

"If Ioniq 5 customers cannot get their cars faster than Model Y customers, there won't be any subsidy left," Kim said.