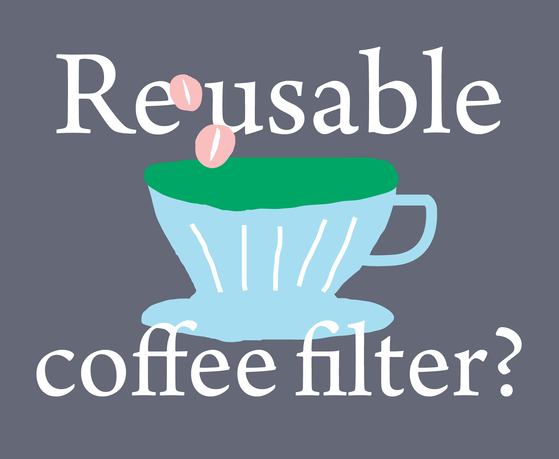 
When Jung Seong-il could no longer face the mountains of recycling that she and her husband were creating every week, she made the decision to live a zero-waste lifestyle.

"I was always proud of myself for being a citizen who recycles well," the 38-year old who lives in Seoul said. "Every week, I put a lot of effort into cleaning the containers and removing the labels before taking them out. But when I noticed the amount of 'recycling trash' a two-person household was creating every week, I thought this isn't right."

But Jung's decision to become a zero-waste household was no simple undertaking. 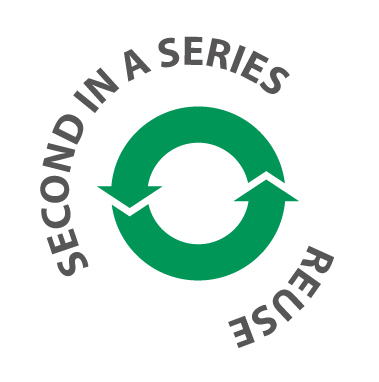 First, she had to make a checklist of all the disposable and plastic products she had habitually been using around the house — from wet wipes to dental floss picks — for both convenience and out of ignorance.

Then one after another, she replaced the items with more environmentally friendly options, which usually cost more, like using solid soap bars instead of liquid soap that comes in plastic bottles and using toothbrushes made from bamboo that decomposes easily.

"The list was endless," she said. "It was almost everything I that use. Halfway into making it, I though this is pointless."

The time, the amount of effort and the money that go into becoming a zero-waste advocate "seemed just too much for me," Jung said. "And I really didn't know where to start because when I made the list, it felt like I had to just change who I am and my whole lifestyle."

Then she found an open chatroom on Kakao Talk with about 800 members who "wish for a world without trash," which is the name of the room.

There, she was able find encouragement, get ideas and share stories of both good and bad practices of living a zero-waste lifestyle.

It's been nearly two years since Jung made her list.

"I still can't say that I'm living a perfectly plastic-free life even today," she said. "No one can change their lifestyle just like that, going from being a heavy plastic or disposable products user to a zero-waste advocate overnight. You have to lose the 'all in or nothing' attitude."

"I think people hesitate to go zero-waste because they are afraid that other zero-waste advocates will judge them if they don't show strong will at all times," she said. "But actually, it's not true. I found encouragement and the will to try again by surrounding myself with like-minded people."

"I am pretty sure that a lot of people out there are aware of environmental pollution. But awareness doesn't necessarily translate into action. That's because people often don't know where to start," said Jung. 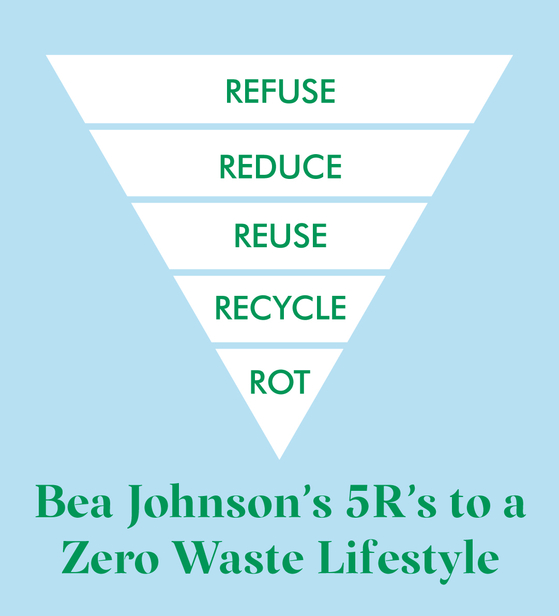 Jung wants to create a manual that details where she began, how she's doing now and what she's done wrong so that people can start changing their consumption habits. Referring to the "5R's" by Bea Johnson, a U.S. environmental activist who began the zero-waste movement around 2010, Jung said the keyword to remember at all times is "reuse." (Johnson's 5R's of zero waste are: Refuse, Reduce, Reuse, Recycle and Rot.)


Shampoo: Jung and her husband use the same shampoo, or in Jung's words, "my husband doesn't mind his hair having the lovely scent of roses." To go plastic-free, Jung tried using shampoo bars that come without plastic containers. But they run out so quickly that Jung decided to visit refill stores instead.

One of the most popular zero-waste stores in Seoul is Almang Market, located in Mangwon-dong, western Seoul. Jung is a regular and purchases most of her daily necessities there. She brings her own container to the store and refills it with the organic options available. The popular silicon-free Aromatica shampoo is sold at around 30 won ($0.02) per gram. 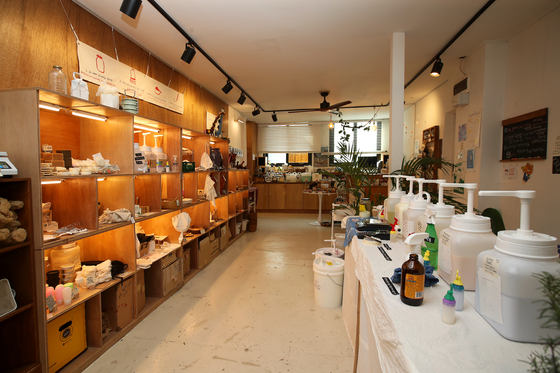 Almang Market in Mangwon-dong, western Seoul, is one of the most popular zero-waste stores in Seoul. It opened its doors last June. [JANG JIN-YOUNG] 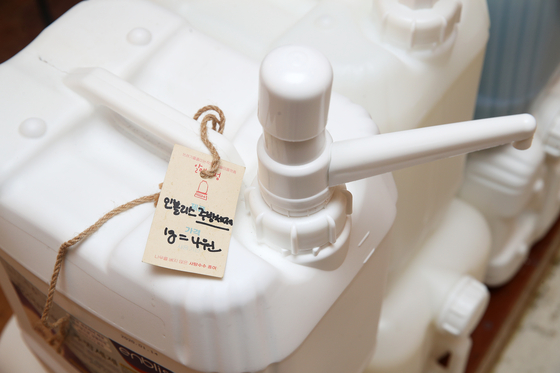 Consumers can purchase detergent, shampoo, grains and much more by the gram at zero-waste store Almang Market in Mangwon-dong, western Seoul. [JANG JIN-YOUNG]


"There are a lot of products that you can refill at Almang Market," said Jung. "You just have to take your container, and buy rice, grains, coffee beans, body lotion and detergent which is all sold by the gram."

"In the long run, I think it's a lot more economical because I'm not paying for the containers every time. It's also good for my body and the environment," said Jung.


Dental floss: One of the must have items in Jung's bags, on her office desk, on her bedside table and in her car is dental floss.

"I just have a really crooked teeth," Jung said shyly. For convenience, she had been using dental floss picks that are made of plastic. 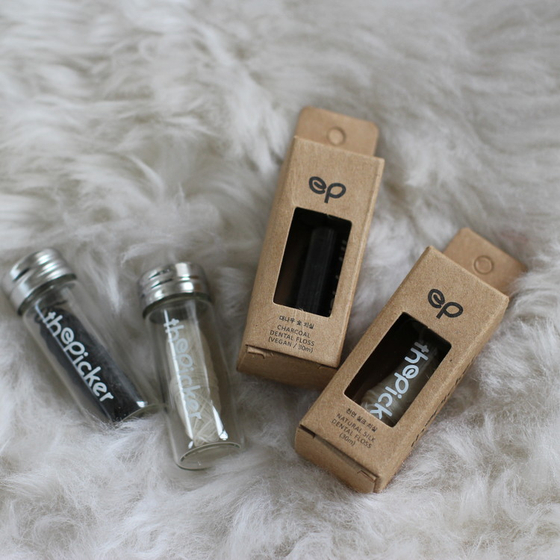 Natural dental floss is packaged in glass containers. The thread is made of either silk or bamboo fiber, which are both biodegradable. [THE PICKER]

"Me and my husband used at least six of those picks per day. When you think about it, the thread and the pick are all plastic," Jung said.

After visiting another zero-waste store called The Picker in Seongsu-dong, eastern Seoul, Jung realized there's a "natural dental floss" made of silk and bamboo fiber, which is biodegradable.

At The Picker, the natural dental floss is sold in a small glass container, which cost 6,500 won. You can then buy refills priced at 9,000 won for two.


Glad wrap: The thin plastic film, widely known as Glad wrap, used to seal food items in containers to keep them fresh can be found in most kitchens. 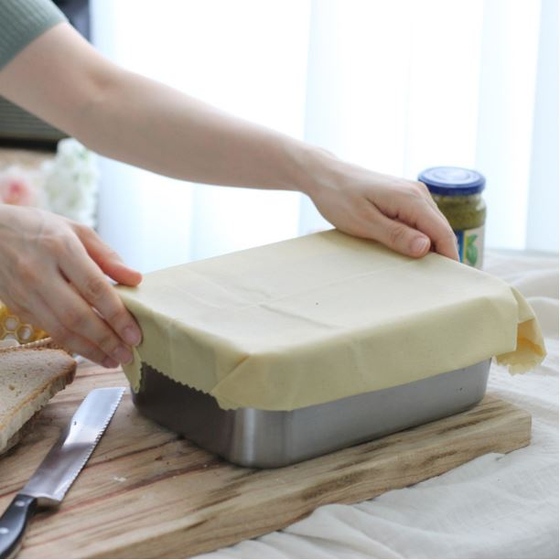 Jung had used it to seal side dishes and save leftover fruit. She said she first tried using reusable silicon tops that come in a variety of sizes as an alternative but it was difficult to perfectly seal different containers and she ended up going back to using Glad wraps. Then she found reusable beeswax wrap. These cotton wraps covered in beeswax are not only adhesive but also water-repellent and can last as long as six months.

"I bought four of them and that's been enough," said Jung. "You have to use natural detergent to wash them and dry them properly to reuse."

Straws: "I am one of those people who drink iced Americanos even during winter," said Jung. "So at home, I used to always have a pack of plastic straws to make myself a cup every morning."

After realizing that straws are too small to be recycled, Jung decided to use a stainless straw she bought for 2,000 won. She had to buy a straw cleaner as well. 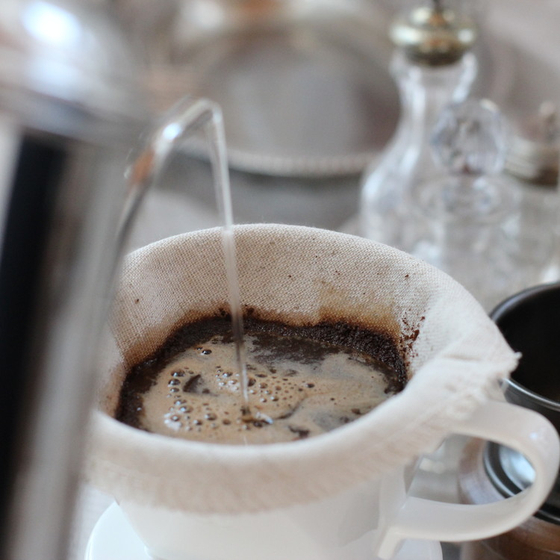 "I first bought a glass straw but I guess I was too clumsy. I broke like three of them so I switched to stainless," she said. "Every week, I sanitize it by boiling it in hot water. I think it's a lot more hygienic than using disposable ones actually."

"For my husband who drinks hot coffee every morning, I bought the filter as well but I haven't tried it yet," said Jung.


Cotton pads: Jung said she noticed another disposable item she used a lot were cotton pads. "I empty my small trash bin on my makeup table and it's filled with cotton pads and sheet masks," said Jung. 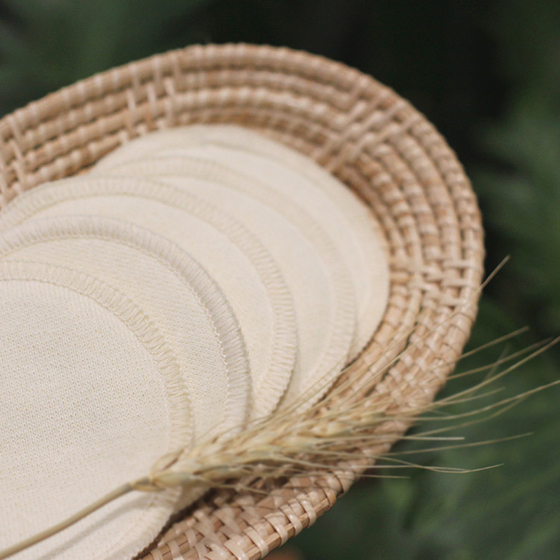 Reusuable cotton pads made of 70 percent hemp cloth and 30 percent cotton. [THE PICKER]

She asked for help in the chatroom and people began to flood her with ideas on how to make her own cotton pads with soft gauze and how to wash them properly so she could then reuse them.

"I would make it if I had time but I decided to buy reusable organic hemp cotton pads made from 70 percent hemp cloth and 30 percent cotton. Ten pieces cost 12,000 won at The Picker," Jung said.

"I hand-wash them when I take a shower," said Jung. "It's not a hassle at all. When I think about it, it was a hassle for me to buy the cotton pads every time I realized I ran out."

Face masks: Living amid the coronavirus pandemic, wearing a mask has become a must. Jung said she was a firm believer in using disposable masks that are certified to filter small particles, which she had also used to combat fine dust when the levels were high.

Then Jung said she realized she's actually polluting the air by using disposable masks and at the same time, complaining about the polluted air. After getting tips from her fellow zero-waste advocates, she purchased a 100 percent organic cotton mask.


"I bought three of them and change them every day, hand-wash them after each use and boil them in hot water with a drop of vinegar and baking soda once a week," said Jung.

Wet wipes: "This was the most difficult item for me to replace," said Jung. "I used to clean my floors with wipes as well as my kitchen counter and tables because I thought it wasn't hygienic to reuse washcloths." But there's just no other alternative, she said.

Jung decided to find time every evening to boil her washcloths and hang them up to dry. "I still use wet wipes when I really have to," she said. "This I compromise on but what's important is not thinking that I'm a failed zero-waste advocate and give up." 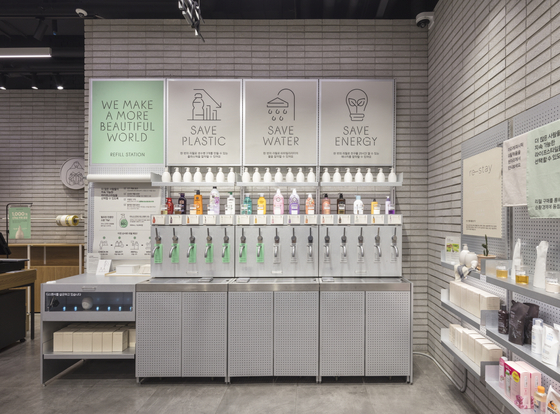 
Yang Rae-gyo, one of the three founders of Almang Market said, "More and more individuals are making efforts to go zero waste, trying to recycle better, reuse things and refusing plastic. But there are limits to individual efforts. The government has to come up with regulations to minimize waste generation in the production stage, like banning overpackaging and so on, but at the moment, they are focused on how to handle recycled materials."


Larger companies are jumping on the zero-waste bandwagon in a bid to win over more environmentally conscious consumers.


Amorepacific is one of them. It opened the very first refill station in the Korean cosmetics industry last October in its Amore Store in Gwanggyo, Gyeonggi.


In efforts to improve the recyclability of packaging, reduce the use of unnecessary plastic, make containers more reusable and increase the recycle and collection rate of used plastics, the cosmetics conglomerate has been increasing the number of products with eco-friendly containers using metal-free pumps and easily-removable labels.


Emart also began operating an Eco Refill Station last September at its Seongsu branch in eastern Seoul and has expanded to eight more branches this month, where consumers can get refills of laundry detergent and fabric softener. According to Emart, around 1,000 people use the refill stations at each branch per month and that number is rapidly increasing.


Environmental activists welcomed such move from conglomerates saying that more should take part with the aim of taking care of the planet and not as a marketing ploy.


"The government has to boldly ban the unnecessary use of disposables while giving tax benefits to companies that contribute to the practice of reusing," said Kim Mi-hwa, chief director of the Korea Zero Waste Movement Network. "Companies should produce containers made out of easily recyclable or biodegradable materials while citizens actively purchase such products. We should also learn to endure small inconveniences and minimize the use of disposables."


Kim added that the increased trash and plastic during the pandemic should be a "wake-up call to everyone" and that "the new normal in post Covid-19 era should not be making disposables a default but embracing the zero-waste lifestyle."

Amorepacific looks to reuse and recycle