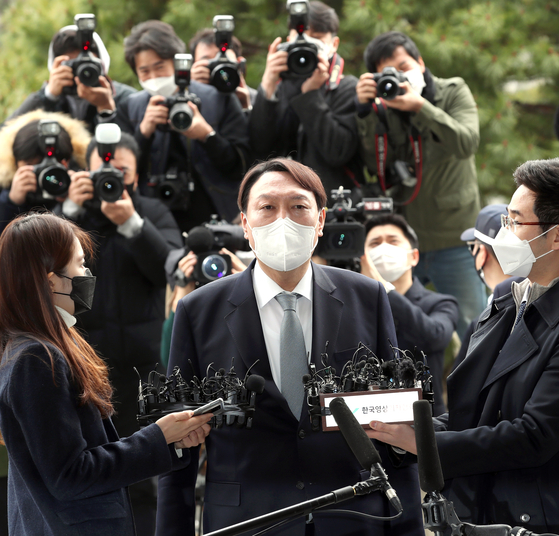 Prosecutor General Yoon Seok-youl on Thursday announces his decision to resign to protest the Moon Jae-in administration and the ruling Democratic Party's plan to weaken the powers of the prosecution. [YONHAP]

"I am stepping down from the prosecutor general position today," Yoon said in a press conference at 2 p.m. at the Supreme Prosecutors' Office. "Constitutional values and the rule of law, which have elevated this country, are being destroyed. And the people will suffer as a consequence."

Yoon said he could no longer tolerate the tearing apart of justice and common sense in Korean society.

He said he will continue to do his best to protect liberal democracy and the people of the country after he leaves his post. "I appreciate both my supporters and critics," Yoon said.

Yoon, appointed by Moon to head the prosecution in July 2019, has four months left in his two-year tenure. Unlike a cabinet minister, the prosecutor general's tenure is guaranteed by law. 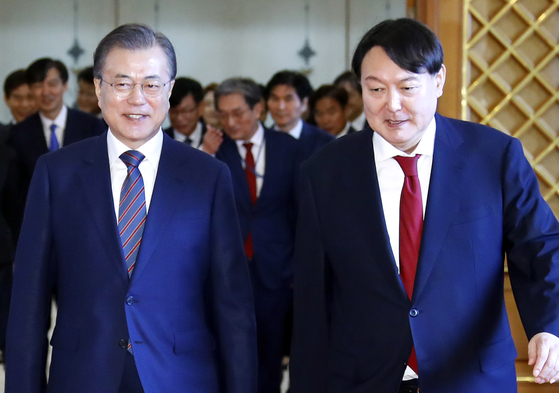 In this file photo, President Moon Jae-in, left, and Prosecutor General Yoon Seok-youl head toward a reception after Moon formally appoints Yoon as the top prosecutor on July 25, 2019. [YONHAP]

At the time of his appointment, Yoon was praised by Moon and the ruling Democratic Party (PD) for successfully pursuing high-profile corruption and abuse of power cases involving the previous administrations of Lee Myung-bak and Park Geun-hye. His relationship with Moon, however, turned sour after he sanctioned a probe into Justice Minister Cho Kuk and his family just weeks after he took office.

Tensions between the prosecution and administration escalated as Moon and the DP pushed a series of aggressive reform measures to weaken the prosecution's powers. As a part of the campaign, the administration established the Corruption Investigation Office, which has jurisdiction over 6,500 high-ranking public officials including the president, cabinet members and lawmakers as well as prosecutors. The prosecution's investigative powers of misdemeanors were given to the police.

Yoon, who has maintained a generally taciturn attitude toward the reform measures, finally broke his silence earlier this week to denounce the idea of completely taking away the prosecution's investigative powers. In a rare media interview on Tuesday, Yoon denounced the DP for pushing a plan to reduce the prosecution to an institution only responsible for making indictments.

The DP recently presented a plan to launch a so-called Serious Crimes Investigative Agency under the Ministry of Justice to investigate six types of crimes, including corruption. The plan would transfer the state prosecution service's current authority to investigate those crimes to the new agency.

The DP has said its goal is to submit a bill on the establishment of the new agency in March and pass it by June. After Yoon announced his resignation to protest the agency, the DP lawmakers sponsoring the bill showed some hesitation. "We do not have a specific timeline," Rep. Oh Gi-hyoung said.

It remains to be seen if Yoon will embark on a political career, as widely expected. Asked about his future plans during the visit to Daegu on Wednesday, Yoon said, "I cannot talk about it right now."

Less than an hour after announcing Moon's acceptance of Yoon's resignation, the Blue House said Moon also accepted the outstanding resignation of his senior presidential secretary for civil affairs Shin Hyun-soo. Shin, a former prosecutor appointed to the post on Jan. 1, offered to step down just six weeks into the job. 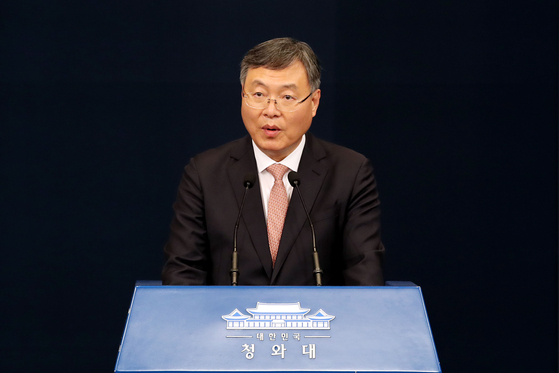 Justice Minister Park Beom-kye, who took office on Jan. 28, announced his first reshuffle of top prosecutors on Feb. 7, but it caused strong repercussions as he ignored the opinions of Prosecutor General Yoon and Shin. The frustrated presidential aide told Moon that he wanted to step down.

Although Moon tried to dissuade him, Shin did not withdraw his resignation. He said he would let Moon decide his future.

Since he took office in May 2017, Moon has ignored a custom of appointing a member of the prosecution as the senior secretary for civil affairs. His first pick was Cho. Two successors of Cho were both from the Board of Audit and Inspection.

Shin was the first former prosecutor to serve in the powerful post in Moon's Blue House. The appointment was seen as Moon's attempt to end the year-long war between the administration and the prosecutor general, but Moon let both Yoon and Shin go on Thursday.

Shin's replacement is Kim Jin-kook, from the Board of Audit and Inspection. 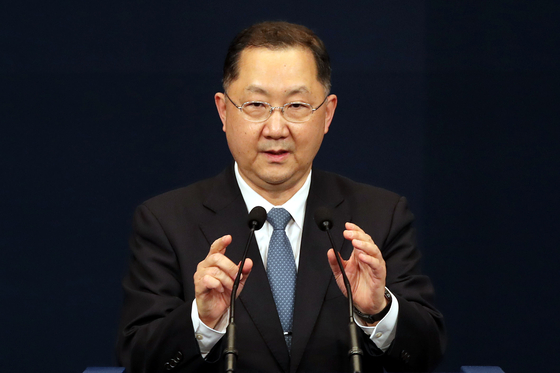 Kim was the presidential secretary for judicial affairs of the Roh Moo-hyun Blue House and a former vice president of the progressive lawyers' group Minhyun, also known as Lawyers for a Democratic Society.