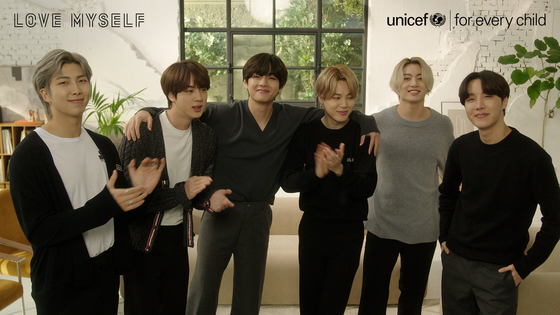 A captured image from a video released on Friday to celebrate the announcement that BTS and Unicef Korea will continue the joint ″Love Myself″ anti-violence campaign until 2022. [UNICEF KOREA]


BTS will continue its joint anti-violence campaign with Unicef Korea for two more years, expanding the ongoing "Love Myself" campaign as well as funding an additional $500,000 to Unicef Korea each year.

According to Unicef Korea, the partnership will not only be prolonged but will also include Unicef, as part of a trilateral effort to eradicate violence against children and young people around the world.

"This is the first time in the history of Unicef Korea where a partnership that started in Korea has been expanded to a global trilateral partnership with Unicef headquarters," Unicef Korea said.

Through the new campaign, BTS will sponsor Unicef's global "#ENDviolence" campaign by donating a part of their income from the "Love Myself" merchandise and "Love Yourself" album series.

Sharing "the wonderful news about the Unicef and BTS partnership," Executive Director of Unicef Henrietta Fore offered her congratulations.

"Four years ago, we came together with a shared ambition to help create a world in which children and young people are free from all forms of violence," she said.

"There are unprecedented times for the whole world, especially for children and young people [...] That's why our global BTS and Unicef partnership is so important at this time. Together, we are committed to reimagining a kinder, safer and a more connected world."

"I thought we were doing this for the people around us, but as time passed, we realized that we had also experienced change within ourselves," said Jimin in a video produced to celebrate the renewal of the two parties' collaboration.

"We were shocked to see the passion and sincerity that so many people showed while participating in the campaign and that good heart also helped me grow and be healed too."

The "Love Myself" campaign began in 2017 when BTS and Unicef signed an agreement to kick-start a campaign to eradicate violence all around the world, especially in relation to teenagers and children.

"Love Myself" won the Best Integrated Campaigns and Events award at the 2020 Unicef Inspire Awards on June 22, 2020.

‘Summer of joy and freedom’ (KOR)