From frappes to fried chicken — make way for the robots

From frappes to fried chicken — make way for the robots 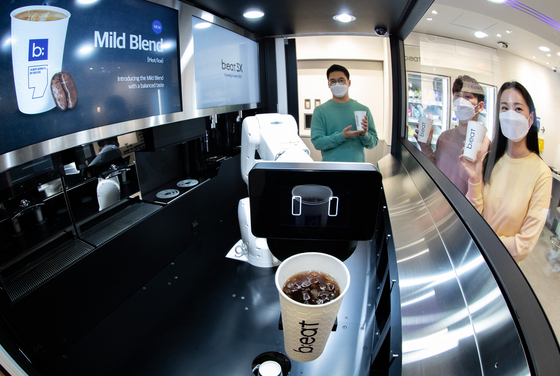 A robot barista used in a branch of B;eat coffee holds a cup of coffee in Bundang, Gyeonggi last Wednesday. [NEWS1]


A coffee shop run by a “robot barista” might have sounded like something out of a sci-fi movie only a few years ago, but more than 100 roasters are already embracing the concept in Korea.

At a branch of coffee chain B;eat in Songpa District, southern Seoul, there are no human staff to be seen. Instead, a digital kiosk takes order and a robot barista whips up caffeinated drinks.

As soon as a customer orders a latte for 2,800 won ($2.50) — almost half the price compared to the same drink at Starbucks — the robotic arm starts grinding coffee beans.

The machine then makes a shot of espresso and pours the coffee into frothed milk, a process that takes around one minute.

“It appears that this coffee is made of great coffee beans as it tastes really good,” said a 35 year-old woman who visited the coffee shop last week.

“But it only costs half [compared to what other coffee shops charge] and I don’t need to worry about coming into contact with human staff in the pandemic,” she said.

The coffee chain uses automated baristas at 100 of its stores in Korea with a plan to launch another 100 new shops this year.

The 100-million-won robot barista can make about 120 cups of coffee in an hour. An interested operator can either buy the machine or rent it for 1.8 million won per month with 30 million won as a deposit.

Another advantage the robot has over its human peers is that it can work around the clock with little or no additional cost, while hiring part-time employees, especially for night shifts, typically costs employers more than the minimum wage.

The minimum wage itself has also rapidly risen in recent years, placing financial burden on retail operators. Back in 2017, it was 6,470 won per hour but has since jumped by 35 percent to 8,720 won this year.

Such robot employees are not only for hire at coffee purveyors.

A robot takes on the role of chef at a chain named “Robert Chicken” located in the Gangnam District, southern Seoul.

This robot chef dips each piece of chicken in flour before frying them and even separates the pieces as they cook by stirring inside the frying net on a regular basis.

It boasts the capacity of cooking 25 chickens per hour, a pace that can't be matched by its human counterparts.

The increase in the use of such machines comes after the government vowed to lift regulations on the development and use of robots.

For instance, the current law bans robots from crossing pedestrian lanes and crosswalks by categorizing them as vehicles. This is why delivery robots can’t be used outside of a building.

To deal with the ban, the government plans to allow robots to use bicycle paths.

The Korean government aims to expand the size of the robot market to 20 trillion won in five years.
But the rise of automated, unmanned restaurants could pose challenges to older people who are less tech-savvy. The Ministry of Science and ICT found that those in their 70s scored far lower in an index measuring the ability to deploy gadgets compared to their younger counterparts.

Lee Jang-kyun, a senior research fellow at the Hyundai Research Institute, says that the government should keep on supporting the adoption of such machines.

“[Korea] needs to get a competitive edge in the robot and digital service sector as development in these areas is unfolding rapidly,” the researcher said, “So, the government should align its policy with this development.”