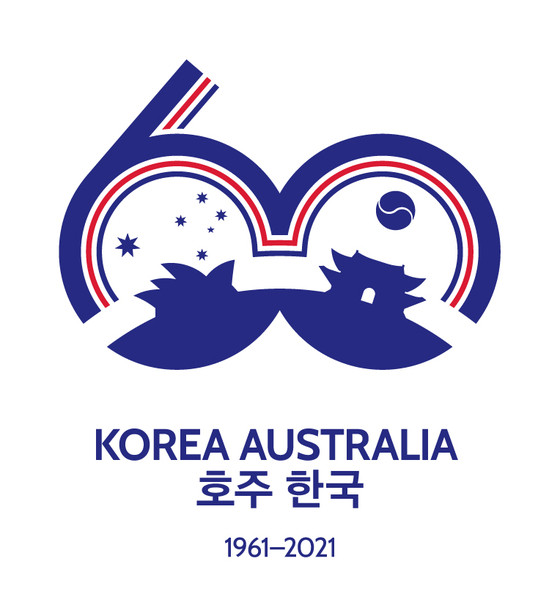 The logo to celebrate 60th anniversary of Australia-Korea diplomatic ties, created by Kim In. [EMBASSY OF AUSTRALIA IN KOREA]

The logo to commemorate the 60th anniversary of relations between Australia and Korea has been selected, according to a joint announcement by the Australian Embassy in Korea and the Korean Embassy in Australia Friday.

The logo, which was chosen from some 180 submissions, was designed by Kim In, a Korean-Australian. It shows “the 60-year-old bilateral friendship between the two countries in the Northern and Southern hemisphere through national flags, colors and landmarks on a concentric circle,” according to the Australian Embassy in Seoul.

“[Both] countries remain committed to an open, inclusive, stable and prosperous Indo-Pacific, and they would continue to prioritize cooperation in coming decades,” the embassy said in its statement.

The Australia-Korea Foundation, established by the Australian government in 1992, will publish a book, “Australia and Korea - 60 Stories for 60 Years,” to tell the stories of 60 individuals who have contributed to the development of bilateral ties in the fields of trade, education, science and the arts. Some parts of the book will be available on a website created especially.

Events in Australia hosted by the Korean Embassy to celebrate the anniversary include an exhibition in Sydney, Perth and Hobart highlighting the lives of haenyo, or female divers, on Jeju Island, a fashion show on hanbok, or Korean traditional dresses, a Korean film festival and a Korean traditional liquor tasting event.

Korea and Australia established diplomatic ties in 1961. Since 2013, the two countries have been hosting a two-plus-two foreign and defense ministers’ meeting every two years.