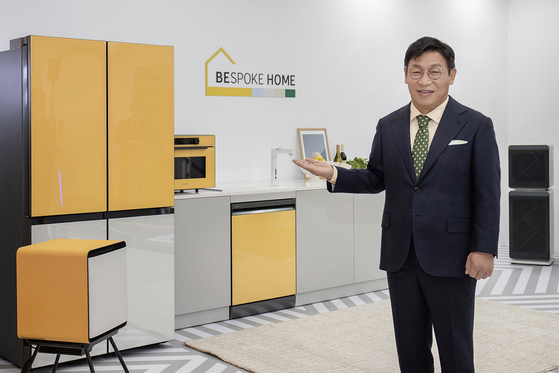 
Korean electronics makers Samsung and LG are increasingly focusing on high-end appliances, catering to customers that are willing to pay a premium for stylish devices.

Samsung Electronics launched its Bespoke brand in June 2019, starting with refrigerators that offer customizable colored panels on each door. Price tags were high: Refrigerators started from 2 million won ($1,760) for a basic two-door fridge, going up to 4 million won for the four-door version.

Regardless, the launch turned out to be a success and over the past two years, the company has slowly expanded the Bespoke range to include washing machines, driers and dishwashers.

On Tuesday, Samsung announced that it was widening the scope of customizable Bespoke appliances to 17 product categories including a shoe cleaning machine, vacuum cleaner and clothing care system. Collectively named “Bespoke Home,” the lineup offers virtually every product category made at Samsung.

“This year’s goal is to boost the share of Bespoke appliances to 80 percent of our domestic sales,” said Lee Jae-seung, president of Samsung Electronics’ consumer electronics business, during an online press conference on Tuesday.

“We launched Bespoke in Russia, Sweden and China last year. The plan is take the brand's products to the United States, Southeast Asia and the Middle East this year and gradually increase the scope of Bespoke appliances sold overseas.”

Every Bespoke Home item comes with several color options. When it comes to refrigerators, Samsung teamed up with paint company Benjamin Moore and offers 360 color choices for the appliance doors. Customers can also choose from 22 different structural designs varying the number of doors, shelves and drawers.

We Hoon, vice president of Samsung’s consumer electronics development, said the company had to redevelop production procedures to realize this degree of customization.

“Bespoke refrigerators had offered color variations before but at that point, it was possible to produce panels in advance by predicting color demand,” We told reporters at a press tour at Samsung Digital Plaza in Gangnam, southern Seoul, Tuesday.

“But that system is impossible now and from now on, orders will be received first and production next. To make sure the customized production is done with speed, we developed a digital printing technology to color glass. It’s a new method and we embarked on procedures to have it patented.”

According to We, this production method would enable Bespoke refrigerators to be delivered in two weeks, not much slower than a typical, ready-made refrigerator that would arrive in about 10 days.

Having started out with four products in 2018, LG added 11 appliances to be covered with coating material developed by Italia’s Arpa Industriale. For its color options, LG partnered with Pantone, a U.S. company famous for its color system.

Despite its premium price tag, with refrigerators costing up to 4.9 million won, LG Objet has shown strong performance: One out of every two appliances sold by LG in February were from the Objet brand, LG Electronics said Tuesday. Forty percent of Objet buyers bought more than two devices from the high-end brand at once.

While Samsung’s Bespoke focuses on customization, LG’s Objet emphasizes the value of appliances as another form of interior decoration, like furniture.

“Considering Objet’s prices are slightly higher in respective categories, our customers seem to recognize the Objet collection’s value as a decoration item,” the company said in a Tuesday release.